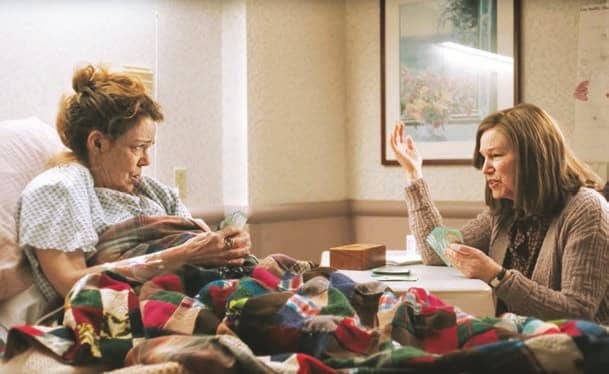 A woman self-sacrifices in Diane.

KENT JONES, who wrote and directed Diane, puts us in the presence of death before he even lets there be light: He begins with a black screen and the beep of a vital-signs monitor connected to a woman in the last stages of cervical cancer. Not a hopeful sound. But the first shot isn’t of the dying woman, Donna (Deirdre O’Connell). It’s of her cousin, Diane (Mary Kay Place), asleep in a chair in the hospital room. And it’s Donna—emaciated, attached to machines—looking on with concern. The image of the worried terminal patient, which is disconcerting, is a sign of what’s to come. Diane is saintlike in her devotion to others; she drives from the hospital to the homes of elderly friends to a soup kitchen to the grubby apartment of her son, Brian (Jake Lacy), who has plainly fallen back into drug addiction, to the hospital again. She dutifully runs herself down, day after day, as if expiating her sins. But it turns out there’s a cost to being so present: You can’t escape the knowledge that you’re here today, gone tomorrow. At the end of that first scene, Diane wakes with a start and apologizes to her cousin for being absent for a moment, because absence is not what she does.