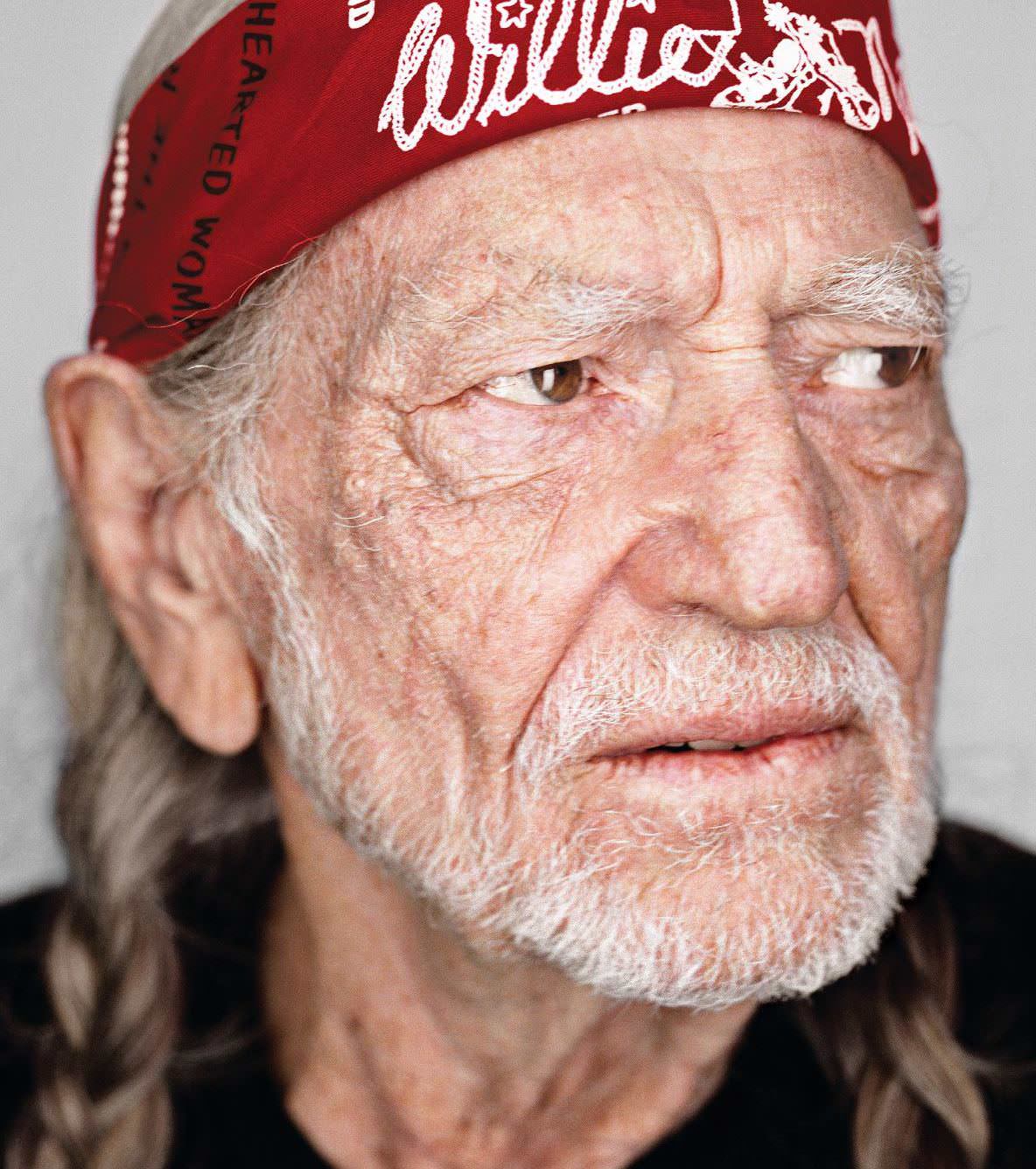 Backstage at farm aid is a hidden city. You enter through a guarded gate just north of the concert pavilion, leaving behind the woozy crowd and vendors hawking organic snacks, then you drift through a gaggle of agitated assistants, past the roadies bustling about, and you follow a trail of golf carts heading for the residential district, where dozens of tour buses have been crammed together to accommodate the sheer number of headlining acts, with John Mellencamp’s people over here and Neil Young’s entourage there, with Dave Matthews and Kacey Musgraves and Jack Johnson each presiding over a small convoy of RVs, which you slip between and among, ducking down the narrow alleys, until at last you burst into the enormous plaza that surrounds the ‘Honeysuckle Rose.’

The Rose is parked just slightly akimbo, with its front wheels cocked to one side. It is a 45-foot Prevost X3 with a 334-foot wheelbase, which is the same model used by President Obama during the 2012 campaign or, to put it another way, it’s just about the sweetest ride a tour bus can be. Unlike the president, Willie Nelson doesn’t require a lot of armored plating. He keeps an old Winchester rifle onboard, tucked into a cabinet over his bed, but otherwise the custom details of the Rose tend to be personal, pragmatic touches, like the twin biodiesel generators he installed in the under-floor compartment, with a special exhaust line that runs through the roof to avoid drowning the bus in fumes. Today, a crisp September afternoon under the yawning Illinois sky, there is a far more pleasant smoke wafting about the plaza—billowing, in fact, from every crack and gap in the carapace of the Rose. That’s because Willie is onboard, wailing on a monster spliff.

Well, not just a spliff. More like a medley of miscellaneous marijuana. At 82, Nelson is a slightly shrunken figure, just over five-foot-six, with ramrod posture and shoulders so abrupt that his black T-shirt appears to be suspended from a pair of broomsticks. His long gray hair frames a lean gray face as rutted as a distant moon, and he is sitting, as he usually does, in a chair beside the refrigerator and cabinets where he and his wife, Annie, hoard the stash. Annie is perched a few feet away, at the end of a long bench, tousling the hair of their 26-year-old son, Lukas, who is lying down with his head in her lap. The décor of the Rose is what you might call “Seventies Luxe.” There’s a lot of dark leather piled into pleats and dark wood carved into extravagant spindles. On the table in front of Willie is: a vase full of pencils, an orange lighter, a smattering of pre-rolled doobies, an ashtray cluttered with the remainders of joints gone by, a dish of loose cannabis caked with kief, three slim vaporizers of marijuana extract, and a deck of black playing cards printed with the words willie’s reserve in saloon lettering.

Nelson leans back in his chair and pulls a long draw from the burning spliff. “This is good weed,” he mutters quietly, reaching up to crack the window. Outside, the stage is just a few yards away, but facing the wrong direction; the muddled music filters onto the bus like the noise of a wet highway. Nelson stares out the window as if noticing the concert for the first time. It’s the 30th anniversary of Farm Aid, and sometimes he can’t believe it’s still happening. “I was dumb enough to think one or two of these would be enough,” he says. “That all those smart guys in Washington would get together and work out the problems.”

The problems in American farming 30 years ago were as intractable as they were abundant. Trapped in a cycle of rising interest rates, plunging property values, volatile markets, and drought, thousands of families found themselves sliding into bankruptcy and foreclosure. The suicide rate among midwestern farmers surged to twice the national average, and it sometimes seemed as if whole communities in the Corn Belt were either broke or dying. “We were losing like 300 farmers a week,” Nelson says now.

The idea to throw a benefit concert first hit him on July 13, 1985. He was in Philadelphia to play the Live Aid fund-raiser for victims of the famine in Ethiopia, when Bob Dylan took the stage and suggested that some of the proceeds might be shared with U.S. farmers. The organizer of the concert, Bob Geldof, dismissed that proposal out of hand, later saying that it was “crass, stupid, and nationalistic” to conflate the two issues. But the whole thing got Nelson thinking. A few weeks later, he was at the Illinois State Fair having a bowl of chili and a beer with the governor, Jim Thompson, when he brought up the idea again. A month later, they pulled it off at a stadium in Champaign. The performers included B.B. King, Johnny Cash, and Loretta Lynn. They raised $9 million that year. They’ve been at it ever since.

“Things are a little better now,” Nelson says, twirling a black vaporizer pen between his fingers. “People have started thinking about buying and growing sustainably.”

In fact, the impact of Farm Aid is difficult to convey. The past three decades have seen a radical shift in American attitudes about food. The project of supporting local farmers is by no means finished business, but if the modern supermarket tells us anything, it is that trend lines are going Nelson’s way. Tart little ugly apples and honking tomatoes have pushed their way onto shelves once dominated by the produce Borg; the “organic” label has become de rigueur to a whole swath of consumers; and the forces of Big Agriculture have, like Big Tobacco and Big Pharma, fallen into widespread disrepute. It is easy to forget that just 30 years ago, basically nobody was talking about these things, and that Nelson as much as anyone helped to mobilize the local-food movement.

But now, as he enters the final phase of his life, Nelson is gearing up for a different battle. He has been a vocal advocate of marijuana legalization for more than half a century, but he has watched the last few years unfold with a combination of joy and dread. Even as the country has softened its stance toward marijuana, a legion of large corporations has gathered to dominate the legal market. Nelson figures he has at least one good fight left. In what may be his last political act, he is declaring war on Big Pot.

By way of first principles , let us pause to establish that legalization is here. That fight is over; legal weed has arrived; all that remains is for the last chips to fall. Some form of marijuana has already been approved in 23 states, and roughly 80 percent of the American public currently favors medicinal use. Support for recreational pot has also been rising over the past decade, with more people in favor of full legalization than against it for the first time in 2011. The following year,Colorado and Washington became the first two states to permit recreational use: It is now perfectly legal in both places to shamble into a dispensary, plunk down a stack of crinkly bills, and purchase a bag of high-grade weed for no loftier purpose than to get high. Last year, Oregon and Alaska approved similar measures, and this month, the bellwether state of Ohio will vote on a proposal to join them. Next year, at least five additional states will consider the same question, while another dozen are working on comparable ballot initiatives, and in 15 states and Washington, D.C., possession of the drug for personal use is no longer a crime. The consensus among doctors has returned to where it stood eight decades ago, when the American Medical Association loudly opposed the decision to make pot illegal in the first place. Even the federal government is beginning to change course: Early this year, President Obama predicted that if enough states decriminalize marijuana, Congress might remove it from the list of Schedule I drugs, and he has informed officials in Washington and Colorado that the Justice Department will not prosecute anyone who complies with state laws.

In the face of all this, investors have naturally begun piling into pot. A race is on to establish the first truly national marijuana brand. The most visible contender in this contest is probably the company Privateer Holdings, which was founded by three Silicon Valley entrepreneurs, one of whom had never smoked pot in his life but who somehow managed to persuade Bob Marley’s family to license his name and image to their packaging. This spring, Privateer completed its second capital drive for a total of $82 million in start-up cash. Or maybe the rise of corporate marijuana is better illustrated by the tech millionaire Jamen Shively, who announced plans in 2013 to create a chain of pot shops modeled on Starbucks that would “mint more millionaires than Microsoft”—acknowledging at one point, “We are Big Marijuana.”

Even the most ardent advocates of legalization have been troubled by the rise of Big Pot. The legalization movement is organized largely around issues of social justice, and for activists who have spent decades railing against the disproportionate impact of the drug war on poor communities, it has been unsettling to watch legalization engender a new slate of economic disparities. Alison Holcomb, who wrote the initiative to legalize recreational marijuana in Washington State, told me that a cannabis industry dominated by large corporations would threaten the core values of the legalization movement. “It looks a lot like the concentration of capital that we have seen with Big Alcohol and Big Tobacco,” she said. “I think that’s problematic for cannabis-law reformers, because it plays into our opposition’s strongest argument.” Holcomb pointed to the initiative in Ohio this month, where a consortium of large marijuana investors has spent about $15 million to promote legalization, while opponents have spent less than $1 million and focused not on legalization itself, but on the fact that the new law would permit only ten of those large producers to operate in the state.

The arrival of corporate marijuana also raises public-health concerns. Pot smokers might prefer to imagine their plants being raised on a sunny organic farm near Boulder, but Keith Stroup, who founded the National Organization for the Reform of Marijuana Laws, points out that when big companies grow things, they tend to rely on the chemical methods of industrial agriculture. “For the average little black-market grower, it’s done on such a small scale that they’re not even using pesticides,” Stroup told me. “But when you’re investing millions of dollars in a large cultivation center, you can bet they are not going to take the risk of their crop getting wiped out by mold or mildew or insects.”