Who Was Lil Tay? 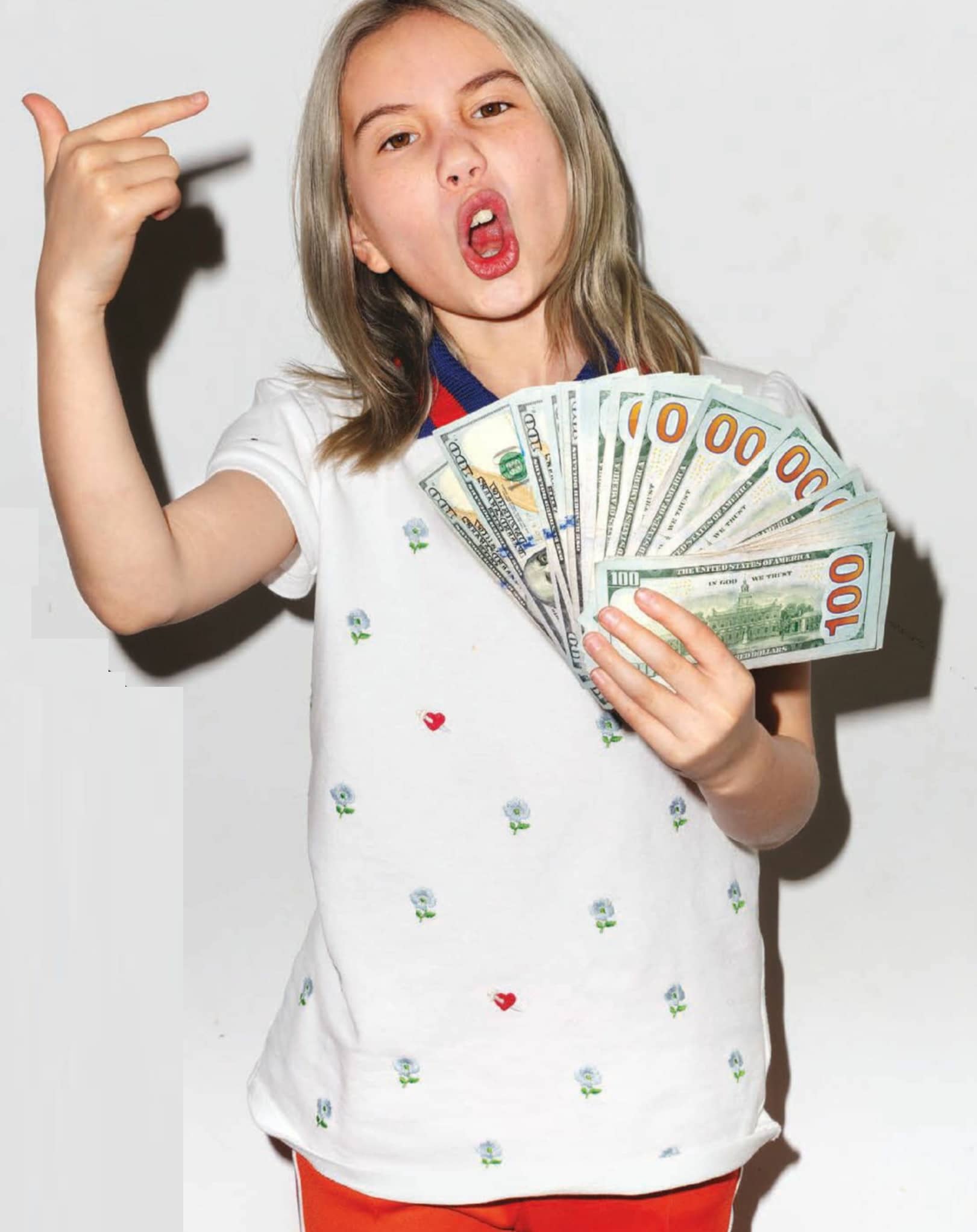 The making, and marketing, of a 9-year-old meme machine.

The lil tay fairy tale begins not with “Once upon a time” but “you already know what it is.” ¶ If you were on Instagram or the internet at all last spring, you very well may. Her toilet, Lil Tay announced, costs more than your momma’s rent. So does her wardrobe, her bed, her jewelry— really anything in her vicinity. Her kitchen is bigger than your entire living room. She wears Gucci belts across her chest like sashes and Louis Vuitton belts draped around her waist. She’s almost exclusively seen holding a stack of cash. “And I’m only 9 years old!” Not only has the grammar-schooler driven a Rolls-Royce (granted, only for five feet in a parking lot), but she has kicked one so hard she left a dent. She is, as she likes to put it, the “youngest flexer of the century.” ¶ There are, in the social-media universe, two kinds of influencers, meaning people who make money, one way or another, by amassing a following. There are those who pose thoughtfully for Instagram while reading a book of Rupi Kaur’s poetry by candlelight, a cup of tea by their side. These people hope to eventually get paid to post content for a wellness start-up. Their lives are, at least from a Gwyneth Paltrow–ish perspective, too perfect to believe. But, in the manner of the Donald Trump of ’80s tabloid fame, the second group of influencers takes an almost opposite path. They tend to be younger and make their mark not on Instagram but YouTube. They look straight at the camera and make statements meant only to shock. They are fourth-graders, but they curse. They are white but speak in accent. They get face tattoos so people will stop and stare. They repeat catchphrases—like “youngest flexer of the century”—to give viewers a mnemonic by which to remember them. Their specialty is becoming living, breathing memes, blips of pop culture that live in ten-second clips or viral photos. The attention sticks if they can attach themselves to a song or TV show.

A whole separate Hollywood has sprouted in Los Angeles for those out to capitalize on this oft-fleeting kind of fame. In apartment buildings on Vine and, once they make some money, in the Hollywood Hills, meme stars team up, sometimes living together in McMansions, sharing their followings and clout, all angling toward a more lucrative hustle, most often in hip-hop.

Last April, as if she’d walked right out of her Instagram feed and into the real world, Lil Tay appeared in L.A., a badass Dora the Explorer come to life. Two weeks after arriving, perhaps faster than any aspiring celebrity before her, she landed her big break. It was the afternoon of April 15, a Sunday, at the Americana mall in Glendale (the Grove isn’t for meme stars … yet), and Lil Tay had been hanging out with Woah Vicky, another meme sensation, famous for claiming she’s 25 percent black. They ran into Bhad Bhabie, who by then had converted her status from girl who frightened her mom on Dr. Phil (catchphrase: “Cashmeousside”) to respectable rapper. A meme dream, if you will.

Like most things in Hollywood, the meeting among the three principals had been prearranged. Its agenda: Woah Vicky and Bhad Bhabie were to squash their beef—which had recently involved Woah Vicky using a racial slur for one of Bhad Bhabie’s friends— while on-camera. It was to have been just another snippet in the drama creation that defines the meme life cycle. Memes fight, memes apologize, memes post it all online for clicks and ad money.

As usual, TMZ was there filming. Bhad Bhabie instigates, taunting Woah Vicky to “put your bag down, tough stuff.” In other words, free up your hands so we can get physical. Woah Vicky complies, but she’s smiling goofily. The truth is, she really isn’t tough enough even for this WWF style of faux fighting.

At 25 seconds, the camera pulls back to reveal Lil Tay. She’s wearing a delicate white lace shirt, hair dyed blonde, standing at least three heads shorter than anyone else in the frame. She’s got a cherubic face and rosy cheeks, but her delivery is stone cold: “You tryna fight?” Watching Lil Tay is like seeing a baby with a bouffant—incomprehensible and funny.

In the next scene, men surround Vicky, but Bhabie jumps in from camera right and throws an awkward punch over their shoulders. The girls are separated, and as Bhabie escapes up an escalator, Lil Tay stands a floor below, screaming into the void, “Bitch!”

There were three girls in the fight, but in the end, only one mattered. That morning, on her way to the mall, Lil Tay had around 300,000 Instagram followers. Three days later, she was up to 675,000 and officially verified. Over the next week, she hit 2.5 million followers and averaged about 15 million impressions per post. By the end of 2018, the eighth-most-Googled question beginning with the word who was “Who is Lil Tay?”

LIL TAY’S ORIGIN story, according to Lil Tay, and to the dictates of the theater of the absurd that is meme-dom: She grew up “broke as hell” in Atlanta but worked really hard “moving bricks.” Eventually she got into Harvard and then dropped out. At one point, like her friend Vicky, she claimed to be “partially black.” Now she lives in “the hills” (which ones? She hasn’t specified). She began sharing this rags-to-riches tale on Instagram and

YouTube late in 2017, and by January 2018 her antics had found an audience. There’s a whole genre of YouTubers who entertain by roasting fellow social-media stars, and Lil Tay followed in that tradition by taking aim at an Asian-American 21-year-old who goes by RiceGum and who leads the insult school with a remarkable 10 million subscribers. Lil Tay mocked him for being three times her age and still on YouTube with nowhere near her bank account. He took the bait and recorded two videos in response; collectively, they’ve been viewed over 13 million times.

In March, roughly four months after posting her first videos, Lil Tay connected with Dooney Battle, co-founder of the management group Tha Lights Global. Battle, who did not respond to interview requests, manages Lil Pump—the face-tatted, colorful-haired rapper who appeared in images across Instagram’s meme-focused accounts before releasing music and eventually collaborating with Kanye West. Tha Lights Global has emerged as the premier management group specializing in musicians and rappers who begin their careers with social-media fireworks.

Here’s the thing: When Battle and other aspiring managers sent Instagram messages to Lil Tay’s account, they say they didn’t hear back from a 9-year-old girl. According to Instagram’s rules, users must be 13 to open an account, anyway. Instead, a 16-year-old boy, Jason Tian, wrote back. Which is to say that one answer to the question “Who is Lil Tay?” is another question: Who is Jason Tian? Lil Tay is the face and the attitude, but if this is a case study in the creation of social-media fame, then Jason, Lil Tay’s half-brother, is the genius behind the curtain.