What Made the Difference? 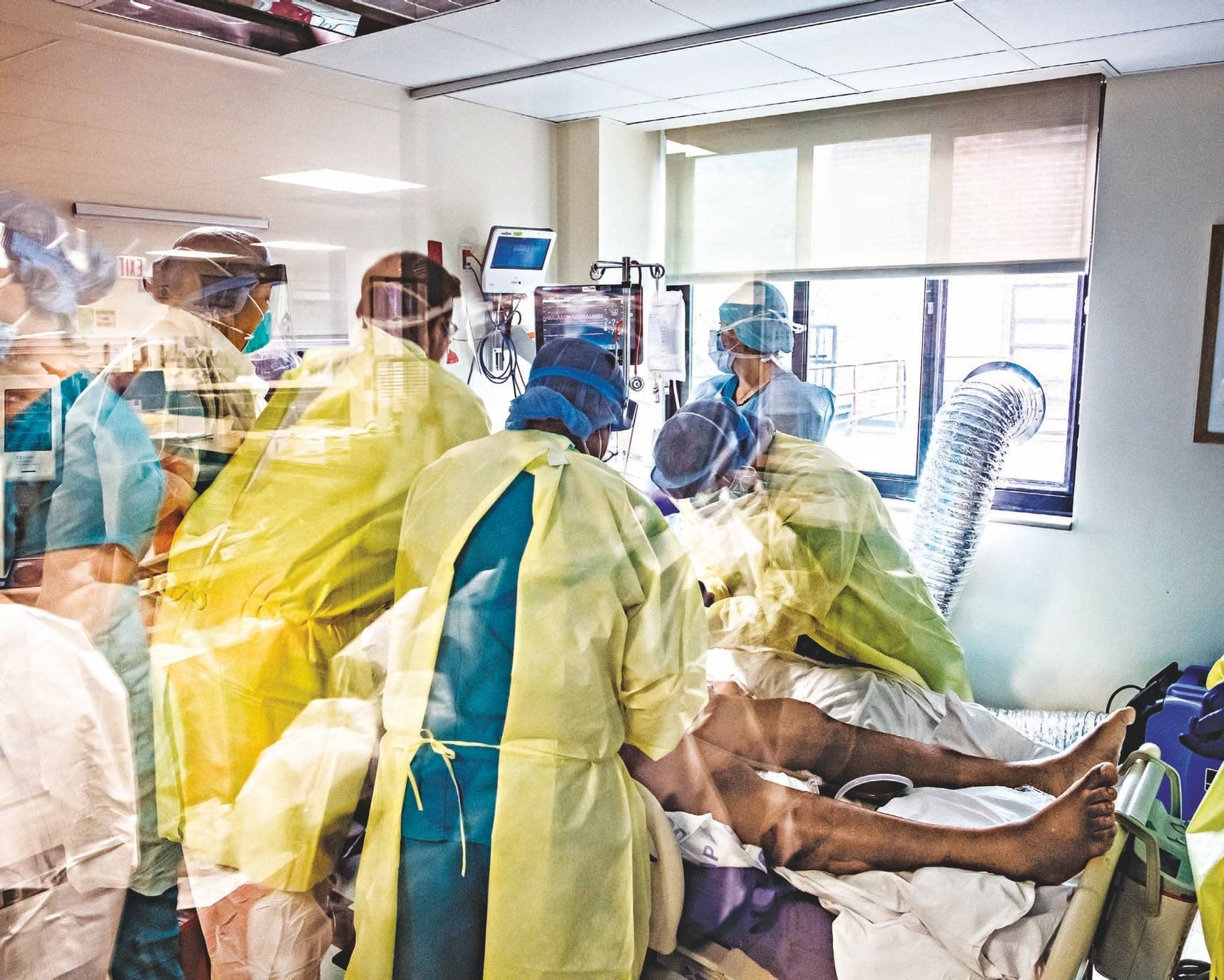 How one Brooklyn hospital survived its deadliest spring.

IT WAS THE LAST WEEK of the longest March in recorded history, and Mount Sinai Brooklyn was teetering on the brink of collapse. In the emergency department of the 212-bed community hospital in Midwood, more than 90 patients were crammed into a space that usually holds 30 or 40. Almost every one of them was short of breath. Emergency-room nursing director Bobby Lynch played a complex game of Tetris to extricate a patient from behind a five-deep row of stretchers, maneuvering him to one of the three dialysis-equipped bays, while department medical director Deborah Dean rushed to bring a portable oxygen tank to a patient whose skin was turning blue. The alarms indicating patients who required immediate resuscitation rang out in a deafening trill. Corpses lay under white sheets head to toe with the critically ill. Roughly a fifth of the hospital’s staff was sick with COVID-19, including the hospital’s president, Scott Lorin, who was coordinating reinforcements from a stretcher in Mount Sinai’s main branch on the Upper East Side. And according to the governor’s office, it was going to get worse. “We just looked at each other, and one of my co-directors said, ‘If this isn’t the peak, I’m afraid of what the peak will look like,’ ” Lynch recalls.

Lorin, 51, had been a pulmonary and critical-care physician for 20 years before becoming an administrator. He knew intimately how overextended his hospital had become. Pre-COVID, the ICU could hold 12 patients. On April 1, 51 patients were on mechanical ventilators, and around a third of the patients in the hospital required critical- care support. That same day, 37 rapid-response teams were called; on a normal day, it’s around three. As he described the situation to his bosses, he periodically hit mute to cough and gasp for air. “My job is to see the future,” he says.

“And I saw [our numbers] rising so fast, and us so unable to keep up, that the hospital was really in danger.” His worst fear was that people would begin to die, not just because of the virus breaking down their bodies but because of a hospital that had broken down around them. “There is no blueprint for that at all,” Lorin says.

In the end, the hospital didn’t collapse, and now, as the first wave of the pandemic recedes, Lorin and his staff are conducting what’s known as a “hotwash,” a systematic evaluation of how they weathered the crisis. The virus was a stress test for the medical system, finding its weaknesses but also summoning its strengths. COVIDwasn’t a single tsunami that pummeled MSB; rather, it was “crests after crests, day after day, waves and waves of tsunamis,” says Lorin. “It’s not that you’re making rapid, courageous decisions or actions for a few days; you’re doing it every day, and it’s constantly evolving.” They learned a lot.

The virus hit Mount Sinai Brooklyn early and hard. That it survived without seriously rationing care or a complete breakdown is no small feat. It did so in part due to quick decisions on the individual level and a bureaucratic hospital system’s embrace of flexibility. The job for Lorin now is to understand what made the difference, so that when the virus comes again, which in all likelihood it will, they’ll be ready.

In the past few decades, hospitals like this have seen their patients siphoned off by both urgent-care clinics and large academic medical centers, the kind equipped with state-of-the-art technology that can take care of sicker patients and, just as significant, command higher insurance reimbursements. Many smaller hospitals have either folded or been absorbed into larger health-care systems, including Kings Highway; in 1995, it was bought by Beth Israel Medical group, which became part of the Mount Sinai Health system in 2013. Mount Sinai is now the largest academic medical system in New York City and one of the biggest in the country, with eight hospitals, a medical school, and around 150,000 inpatient admissions per year.

Still, Mount Sinai Brooklyn remains at its core a community hospital. Staff often live in the surrounding neighborhoods, and some have treated the same families, who now include Russian immigrants as well as African- and Caribbean-Americans, for decades. While the hospital has new facilities, like a robotic-surgery center, the sickest patients are generally transferred to the main Mount Sinai campus. MSB’s East Wing, with its narrow corridors and cramped patient rooms, dates from the 1950s and has none of the glamour of the Manhattan hospital. “The type of doctors who retain PR agents aren’t the type to come and work in Midwood, Brooklyn,” says Gary Gwertzman, MSB’s director of vascular surgery, who has been there for 14 years. “When there is a major medical event in the world, CNN doesn’t come to Mount Sinai Brooklyn, and the folks here are fine with that.”

The affiliation gave MSB significant advantages in fighting COVID. For one, a sourcing team began working in January to build up stores of PPE, even sending two private jets enlisted by Warren Buffett’s company to get N95 masks from China. That meant that at the peak of the crisis, even while public hospitals faced PPE shortages, Mount Sinai’s remained stocked. But for all that, the virus kept surprising them, to deadly effect, behaving like nothing they had ever prepared for.

“The major issue, looking backward, is that in the beginning we were admitting COVID-positive patients in the hospital and we had no idea,” says Lorin. The initial directive to all Mount Sinai hospitals was to screen for patients with respiratory issues who had a relevant travel history. In mid- and late February, the hospital ran “secret shopper drills” in which Lynch and Dean hired their family members to come in complaining of cough and fever and admit they had traveled to affected areas only if the staff pressed them. If staff uncovered this information, they had been trained to isolate the patient in a small area of the ED that had been sectioned off.

At this point, the hospital was testing only patients with respiratory complaints, and it was a convoluted process: For people tested in the ED, test kits were sent out to LabCorp, and five days later results would come back. Patients admitted to the hospital were tested through the New York State Department of Health, which had to approve the test and then had a two-to-three-day turnaround. On March 9, a patient was admitted complaining of dizziness. ER doctors ordered a CT scan and were shocked to discover his lungs were filled with COVIDS'stelltale ground-glass opacities. It was the hospital’s first confirmed case.