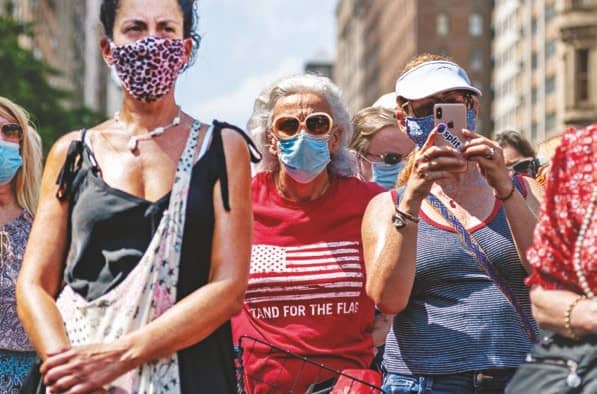 Liberals on the Upper West Side wanted to oust hundreds of homeless men from a local hotel. Then Tucker Carlson took up their cause.

BY THE TIME Alison Morpurgo heard that 283 homeless men would be moving into the Lucerne Hotel, just a few blocks from her apartment on the Upper West Side, she was already riled up.

It was late July, and Morpurgo was ven­turing outside after isolating for months with her two teenage kids—walks in the park, the occasional coffee with a friend. “It was like, Wow, this is amazing. We’re outside again,” she recalled. The Upper West Side, where the median income is almost twice the citywide average, wears its liberal­ ism like a badge of honor, and at the start of the pandemic, gestures of compassion abounded. Cozy Italian restaurants turned into grocery stores selling essential items. People put up signs offering help to those in need. A local student who delivered food to the elderly was invited to appear on Good Morning America.

But as the neighborhood came back to life, things felt … different. Amid the out­ door restaurants and the couples ambling down Broadway, Morpurgo saw discarded needles on the sidewalk and people passed out on benches. “The streets were starting to feel a little bit less safe,” she said. “We just didn’t know what was going on.” Everyone around her seemed to be abandoning the neighborhood. The streets were filled with moving trucks; many residents who had fled during the pandemic to second homes in Connecticut and the Hamptons decided to leave for good.

Morpurgo, who leads a team of regula­tory lawyers at one of the world’s largest banks, believed there was a direct connec­tion between the two developments: the arrival of the homeless and the departure of the wealthy. As part of a plan to create more space for social distancing at shelters during the pandemic, the city had already moved some 450 men and women into three empty hotels on the Upper West Side. But the arrival of the men at the Lucerne was “the straw that broke the camel’s back,” according to Morpurgo. She and other resi­ dents were alarmed to learn that many of the men were what is known in social­ work circles as mica—short for “mentally ill chemical abuser.” The day after the men moved into the hotel, a new group popped up on Facebook to demand that they be relocated. The group called itself Upper West Siders for Safer Streets.

Who actually started the group remains a closely guarded secret. “It was a collaborative process,” the woman who pulled the trigger told me through an intermediary. “Many neighbors, once strangers, came together to create a virtual town square and effect compassionate, constructive solutions.” Within a week, Safer Streets had more than 1,000 members. Morpurgo, who had been invited by a fellow parent, was among the first.

“There were so many posts about people leaving New York,” she recalled. “So I said, ‘Can we just make this about staying? What we can do to make it better for anyone who either wants to stay or has to stay?’ ” She was asked to become a moderator.

But many people who flocked to the group, she quickly learned, weren’t interested in any form of moderation. Members posted photos of Black men gathered at the meridians on Broadway, close-ups of feces and condoms on the pavement, and pictures of encampments set up by those sleeping in the streets. There was no evidence that any of it involved the men from the Lucerne, but that stopped no one. “We worked very hard to be here,” read one comment. “The homeless did not. They must me [sic] taken where they belong.” Some in the group took to calling the men in the hotels “creatures.” There was talk of smearing neighborhood benches with molasses to discourage them from sitting down. As the group ballooned to 15,000 members, QAnon symbols began appearing in profile photos. People were shouting about “law and order.” Some didn’t live on the Upper West Side at all. Others admitted they were Upper West Siders who were watching things unfold from afar.

The New York Post and Fox News quickly seized on the group. Morpurgo had wanted press coverage—anything to bring attention to the issue—but this wasn’t what she had bargained for. Sean Hannity and Tucker Carlson devoted segments to discussing how this nice, expensive (read white) corner of the city was descending into homeless (read Black) anarchy. The correspondents' Fox sent “into the field” came back with stories—but no footage—of men shooting up in the streets. “A preview of coming attractions if Biden’s America became a reality,” Hannity warned. Paul Joseph Watson, a far-right YouTuber, featured the neighborhood in a video called New York City Is a Sh*thole that attracted nearly 1 million views.