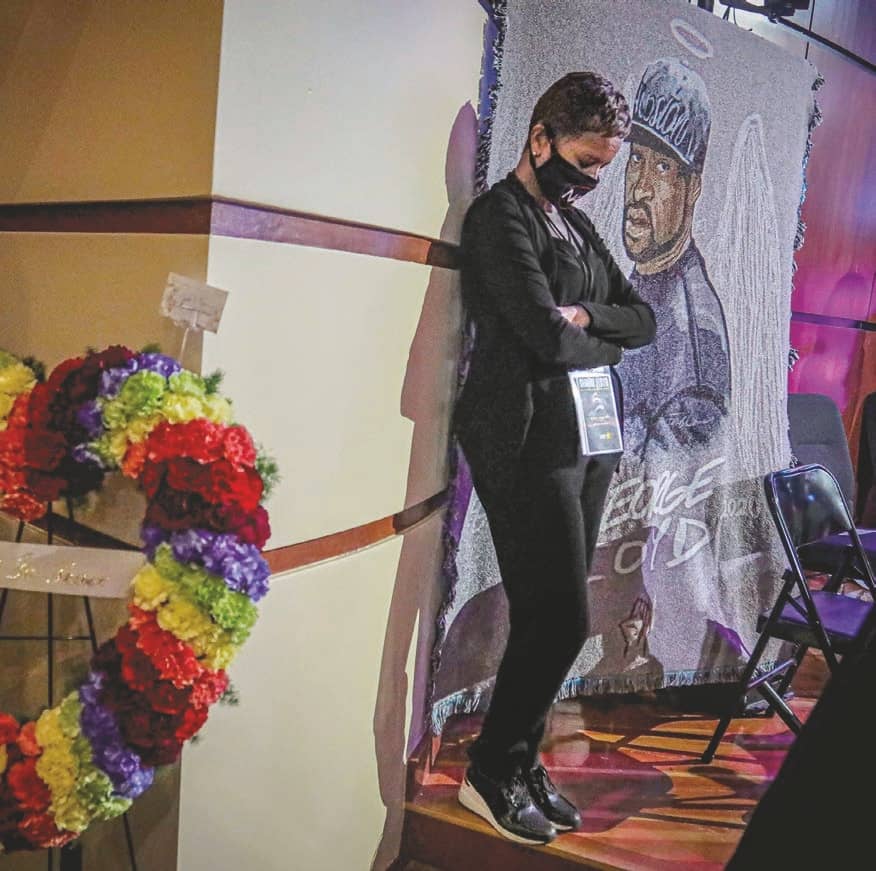 IT WAS EARLY june when I first spoke to Rachel Noerdlinger, and she was worrying about the casket. George Floyd’s memorial service in Minneapolis was to be held in 48 hours, and she was considering how images of the coffin, conspicuously placed at the front of the university sanctuary, might impact the national psyche after ten days of protests. It was the family’s call, of course, but she fretted that they might want the casket to be open, as it had been in the case of Sean Bell. (“I can still picture his face,” Noerdlinger says now. “It’s just blech.”) But Noerdlinger wanted to ensure that Floyd remained in the public mind as long as possible, as “a human being, not a lifeless vessel.”

Noerdlinger was in hyperdrive. Officially, she is a communications strategist, but she prefers the designation “media activist,” a label she learned from her oldest and most visible client, the Reverend Al Sharpton. She first heard the chant “No justice, no peace” out of Sharpton’s mouth more than two decades ago, she told me; he first proposed anti-chokehold legislation after Eric Garner was killed. Noerdlinger has orchestrated press coverage of about 15 instances of Black men being killed by police, but this time was different. A generation of young people raised on cell phones, wanting instant gratification and results, newly politicized since 2016, mistrustful of Establishment institutions, “quarantined in their house, sitting around, not watching sports but watching a Black man be executed on television. The outcry was instantaneous.”

In the frenetic lead-up to the funeral, Noerdlinger made sure the AP journalists Bebeto Matthews, a photographer, and Aaron Morrison, a race-and-ethnicity reporter, would be there. She arranged for Wesley Lowery, the former Washington Post reporter at work on a long piece about Floyd and the uprisings for The Atlantic, to have an on-the-record one-on-one meeting with Sharpton. (“I’ve known him basically since he first got out of college,” she said of Lowery, whom she had worked with closely in Ferguson.) And all this as she tried to figure out how to invite press to a funeral within appropriate social-distancing parameters.

Then, the day before the service, she, together with Sharpton and Gwen Carr, the mother of Eric Garner, who has become a ubiquitous advocate, flew to Minneapolis on a private plane paid for by the actor Tyler Perry. While they were in flight, new, more severe charges were brought against two of the police officers accused in Floyd’s death, and from the plane Noerdlinger organized an impromptu press conference with Sharpton and Ben Crump, the attorney for Floyd’s family and many of the other recent victims of police violence.

Critics accuse Sharpton of chasing publicity, and he concedes the point. Publicity is “exactly what I want,” he said in his Minneapolis eulogy. “Nobody calls me to keep a secret. People call me to blow up issues that nobody else would deal with. I’m the blowup man.”

For over 20 years now, Noerdlinger has been Sharpton’s blowup man, helping turn a provocative but parochial figure from the New York activist fringe, who first came to national prominence pushing Tawana Brawley’s fraudulent accusations of rape, into something like the relentless racial conscience of American liberalism. He and Noerdlinger share the view that even earnest civil-rights causes need actors who understand the value of a good show—and this explains their long, symbiotic relationship. “What made Martin Luther King different from Roy Wilkins?” Sharpton asked me in his midtown office a few weeks after the funeral. “The drama. And I learned, from Dr. King and James Brown, you’ve got to grab their attention. I’m in New York. You’ve got to do something dramatic in New York. I’m not in northern Alabama. I got to grab the spotlight, and I need somebody who knows how you grab the spotlight.” In Sharpton’s Minneapolis speech, he called on white America to “get your knee off our necks.” “It just came out of his mouth,” Noerdlinger says. “I knew that it would be a clarion call.”