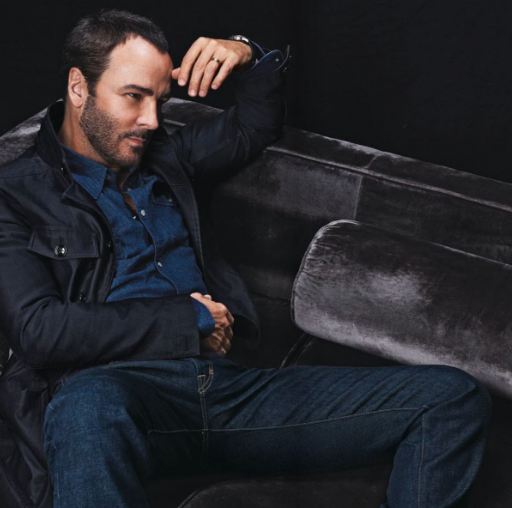 EVER SINCE 2004, when Tom Ford walked away from the Gucci Group, he has done things in his singular way. He’s made two movies (both of which have been nominated for all sorts of honors, Oscars included) and developed his own line in reverse order from everyone else (eyewear, followed by fragrance, followed by cosmetics, followed by clothes). He and his husband, former Vogue Hommes International editor Richard Buckley, became parents to a son, and Ford’s moved his design studio from London to Los Angeles, though it’s still kind of in London. There’s also an office in Milan, and one in Tokyo, because “that’s what fashion people do. It’s normal.” ¶ So much about the way fashion works today—the designer star system, the luxury conglomerates, the cultish immersion in a house’s overall ethos—can be traced back to 1995, when Ford showed his landmark collection for Gucci. Even then, he was more than just the designer; he played a key role in assembling the Gucci Group (which was folded into PPR, which became Kering), and Kering acquired and still controls a group of top-end brands that includes Saint Laurent, Stella McCartney, Balenciaga, and Alexander McQueen. (His straddling of the business-creative divide was unprecedented and not always welcome. When Ford was appointed creative director at Yves Saint Laurent, Mr. Saint Laurent was not impressed. “The poor guy,” he said snobbishly, “he does what he can.”)

At this particularly chaotic moment for the fashion industry—which city should a designer choose for a show? When should the clothes we see on the runways be available to buy?—Ford projects his trademark calm. It’s the fifth day of a London heat wave, and there he is, crisp and handsome, emerging from some very tall black doors in his office with a half-grin. He smells “like walking potpourri. I spray on one and then an hour later I spray another. I just do it all day long,” he says, sniffing.

Ford has always been famous for selling sex, for embracing luxury and excess (for his first fragrance, he bred his own flower, the blackest orchid, and captured its heady scent), and for his ability to shock, and simultaneously enthrall, the bourgeoisie. But lately he’s feeling more romantic and maybe even a little nostalgic. Since he’s been designing under his own name, he’s embraced his talent for glamour, with an emphasis on sleek, grown-up, flattering evening wear. “What are day clothes today? Yoga pants. But for evening? Boom. Red carpet, cocktail dresses, mega.”

You played a huge role in creating the modern fashion world, in elevating the star system of designers at old houses. It feels like it’s all gone a bit off the rails—what do you think about where fashion is right now?

This whole musical-chairs thing that’s going on now at brands I find so dangerous. I think Riccar do Tisci is brilliant, and he was doing a terrific job at Givenchy. I have no idea why he’s gone. Nicolas [Ghesquière] was doing a great job at Balenciaga. When the customer identifies with a brand and then you flip the designer and a new one comes in, how does that brand have consistency over time? How does it mean something? And with the number of collections that we’re expected to do now—before I show this one, I’m already working on that one—how is that supposed to work? It’s crazy. Maybe people will start longing for something that is not as disposable, but I really don’t know. I don’t think anyone knows.