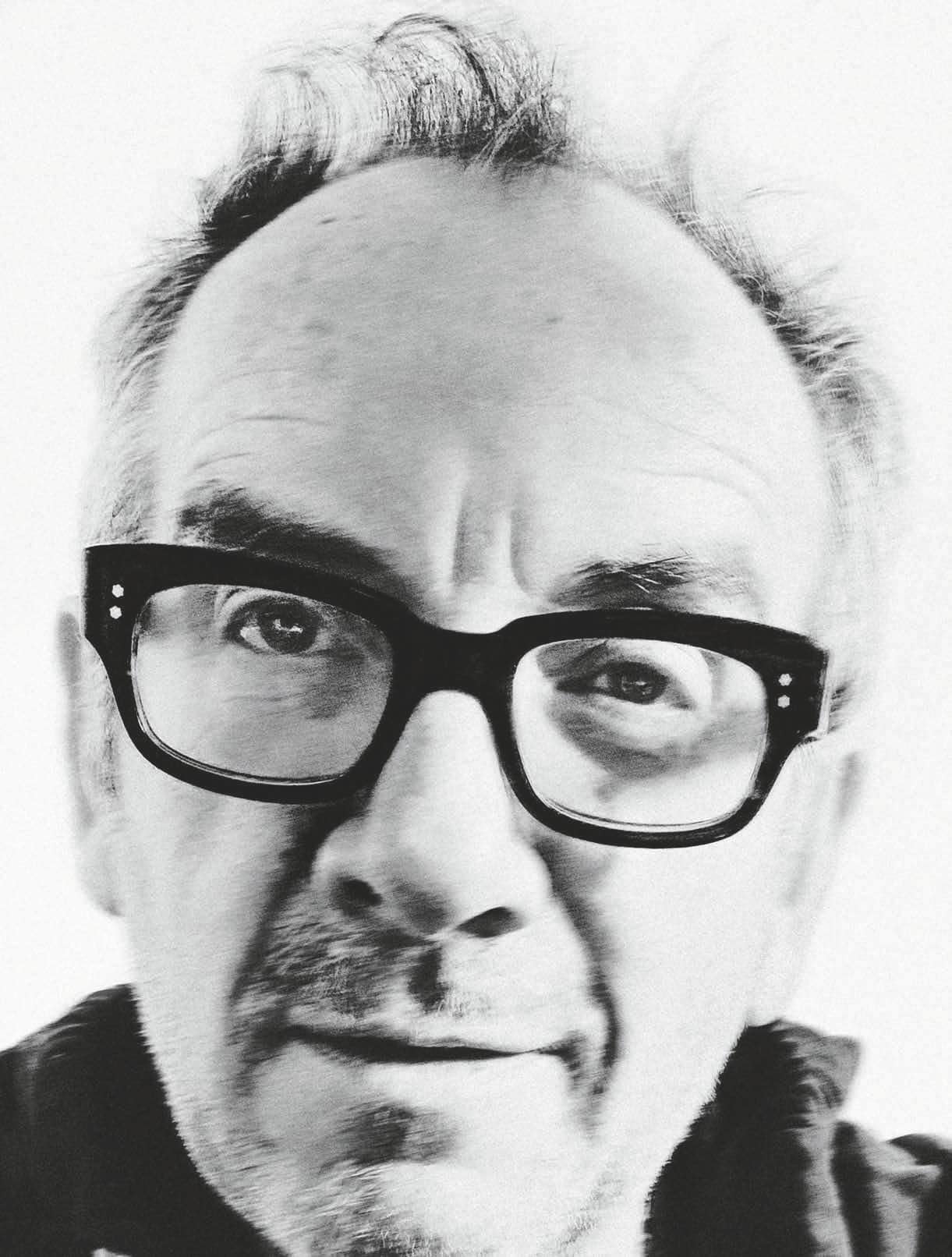 Elvis Costello is back with his 31st (or so) studio album. But don’t look for any consolation from him.

I KNOW WHERE THE BODIES are buried and the choices that I can’t or won’t take,” Elvis Costello tells me with utter conviction and without going into the specifics. He’s sitting under a photograph of a young Aretha Franklin in mid-song and cradling what appears to be a Fender bass guitar, which he seems to be on the verge of playing but never does. He’s outside Vancouver, where he lives with his wife, the jazz pianist and singer Diana Krall, and their two 13-year-old sons, and I’m on my front porch in Syracuse talking to him through my computer screen. We are both wearing black sweaters and specs. Sometimes I wear a hat, as he does. Maybe I’d be dressed this way if I had never heard Costello, but this person was still the same character who grabbed hold of me at age 14 and never let go.

For millions of spectacle wearers like me who came of age in the 1980s, if you put on an Elvis Costello record, it all comes rushing back: your adolescent bile and angst, the pique of every slight, your ex-friends and ex-lovers. It’s an awkward thing to try to thank him for, so I don’t. He was born Declan MacManus in London in 1954 and, thanks to his bandleader father, had access to the latest records: Joni Mitchell’s Song to a Seagull, Jefferson Airplane’s Surrealistic Pillow, Charles Mingus’s Oh Yeah, along with Marvin and Tammi, Lou Rawls, Frank Sinatra, Muddy Waters, Louis Armstrong, and on and on.

“I’ve been lucky to have access to stacks of records pocket money couldn’t have afforded me,” he tells me. “By the time I was 13, 14, I was saving money to buy a guitar, but after that, every penny I spent was on records. I never bought clothes.”

Some of the records had sounds he could never reproduce. Others demonstrated a way into who he could become. “The singer I wanted to be like when I was a kid was Levi Stubbs,” he says. “I wanted to have that kind of voice, like a stun gun, you know, but Rick Danko had a kind of desperation in his voice, with that nervous, like, throw yourself-at-it way that he did. He was a very fearless singer.”

Desperation. Nervousness. Young Declan took it all in. You could take your vulnerabilities as far as rock and roll could allow, even beyond rock and roll when you wanted to. His adenoidal singing voice is not perfect, but it delivers catharsis. And in this pandemic—which cut short his tour in mid-March; he flew back from London to Canada while he still could—who couldn’t use some?

“My vibrato is actually an affliction,” he says when we discuss his distinctive singing on ballads. “It’s because I have a heart murmur. And I think it affects my breathing.”

Pause. I didn’t know this. “But emotionally, it’s so right for the material,” he says.

“Well, there were no held notes in my early material, so nobody knew I had it till tempos dropped a little bit and it came out. I have certain limitations in my breathing. It’s like being color-blind. You can have an appreciation of art and be color-blind. You can read when you’re shortsighted. You take everything that happens in stride.”

Costello always sounds like he’s in a battle. And, growing up, many of us felt that he was battling for us. Take “Pump It Up,” a 1978 angry-young-man classic. It used to surface at basketball games, although its subject is not about scoring but what happens when one doesn’t: “Pump it up, until you can feel it/Pump it up, when you don’t really need it.”

And now he’s even given us a bleak, defiant pandemic anthem: “No Flag,” on which he sings: “I got no religion, I got no philosophy/got a head full of ideas and words that don’t seem to belong to me.” It was the first track to drop from Hey Clockface, which, depending on who is doing the counting, is Costello’s 31st studio album, out October 30. Costello’s indignant muse is still going.