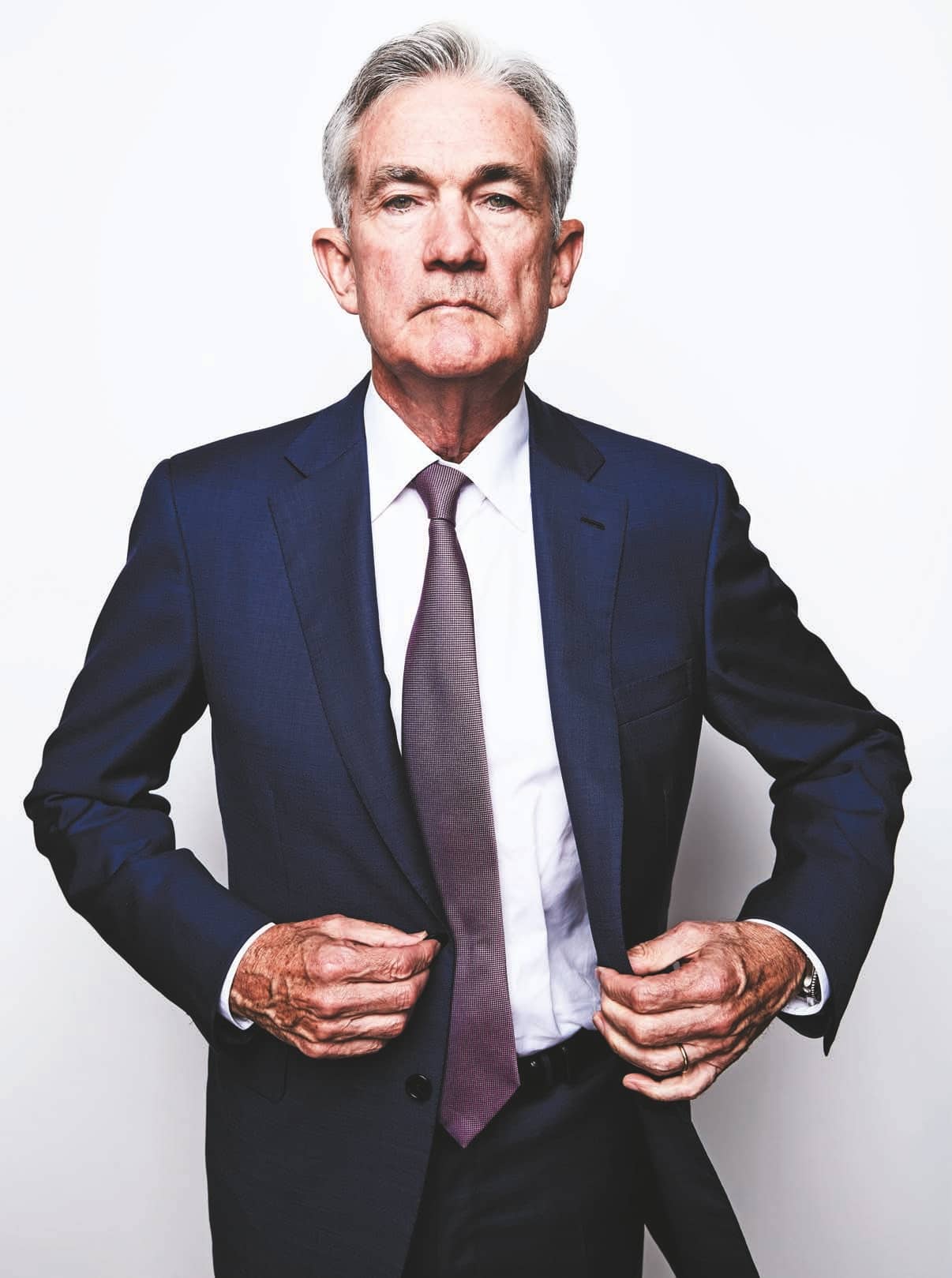 As chairman of the Federal Reserve during the global pandemic, Jerome Powell has managed to do something almost unimaginable in Washington: a good job.

THE GOVERNMENT HASN’T EXACTLY nailed its response to the coronavirus crisis. The mistakes and miscues started with the president, but a host of critical entities have failed to contain the pandemic and its economic fallout. Look at the CDC’s shifting guidance on masks and the botched production of the first round of test kits; at the Small Business Administration’s chaotic rollout of the Paycheck Protection Program; at the refusal of Congress to replenish coronavirus aid to businesses and unemployed workers that ran out in the summer; at New York State’s decision to discharge covid-positive patients into nursing homes at the height of the crisis this past spring.

The Federal Reserve, at least, did its job.

In March, as panic over the coronavirus caused stock prices to crash and made banks and bondholders skittish about lending, the Fed acted to support the economy by flooding it with extra cash it hoped would help keep normal what could be kept normal. It cut interest rates from 1.5 percent to zero, announced it would purchase $700 billion in Treasury bonds and other assets to push down long-term interest rates, and provided liquidity to keep corporations able to borrow and banks able to lend. The Fed’s actions have saved Wall Street—the Dow Jones Industrial Average, which bottomed out at 18,214 on March 23, regained half its losses by mid-April and returned to near-record levels in early September—and have also done a great deal to reduce the pain on Main Street by keeping consumer credit available and interest rates on mortgages and credit cards low. Through its swift and sensible action, the Fed helped forestall corporate bankruptcies and prevented the job losses of the spring from being even worse. The Fed did not—and could not—fix everything that was wrong in our economy with the tools it has available. But imagine if this year had featured a new financial crisis on top of over 220,000 deaths and tens of millions of job losses, and you can see what we have the Fed to thank for.

Even the president has been grateful, calling Jerome “Jay” Powell, the Fed’s chair, the “most improved player” in his administration—only months after asking whether Powell, who had obliquely criticized the president’s trade policies, was a “bigger enemy” of the U.S. than Xi Jinping.

To a large extent, the Fed’s success under Powell is a result of lessons it learned in the aftermath of the 2008 financial crisis and the tool kits it developed under chairs Ben Bernanke and Janet Yellen to respond quickly to the next one: massively expanding its crisis-response functions and focusing more on achieving maximum employment rather than limiting inflation. But the Fed also owes much of its current success to the fact that it is led by Powell—who is not an economist, unlike his three immediate predecessors, but a bureaucratic operator skilled at making friends and forging consensus. In the popular imagination, the Fed is a nonpolitical entity, almost godlike in its distance from electoral pressures. But, as at the Supreme Court, that is just a cover for a slightly different, more personal form of politics. At the same time the president was slamming him on Twitter, Powell was diligently building relationships in Congress, winning over skeptical stakeholders to his right and left, and building the political support he would need for an extraordinary crisis response when the pandemic hit.

It worked. Powell’s success runs counter to the populist political narrative of our era: The Fed’s wonky technocracy has succeeded while the theoretically more politically accountable arms of our government have failed. The Fed is explicitly designed to be insulated from elections—governors are appointed to terms of up to 14 years and cannot be fired by the president without cause, while the Fed’s regional bank presidents are chosen in consultation with stakeholders like banks and businesses. The rationale for this design had long been that a too-politicized central bank would be tempted to prioritize short-term economic performance over long-term sustainability, keeping a temporary check on unemployment by allowing inflation to run too high.

But in recent years, too-low inflation and too-slack labor markets producing weak wage growth have become arguably the largest economic problems facing the U.S. And as outside groups have made that point to the Fed, Powell has listened—holding a series of public events literally called “Fed Listens.” His renewed commitment to engaging with Congress has also extended to public engagement; as chair, he has doubled the annual number of press conferences on monetary policy from four to eight. And at a time when members of Congress seem less interested than ever in pressure from constituents to work across party lines, Fed officials have become more attentive and more flexible. This openness has helped produce a real shift toward a looser, or more “dovish,” monetary policy.

Powell characterizes this increased engagement with stakeholders not just as the right thing to do but also as an effort to earn the bank’s independence at a time when there is deep suspicion of technocrats and elites. “We’ve done a ton of things to open ourselves up, welcoming input from the outside, welcoming criticism,” he told me. “I think it’s a better way to run things. I do think if you’re not doing that right now, then you may or may not know it, but you’re about to go over the falls. It’s a world where you’ve got to be aggressively seeking transparency and accountability if you want to have democratic legitimacy.”

Powell was born into an affluent Catholic family in Washington, D.C. His mother was a statistician and his father was a labor lawyer; they had six children, of which Jay was the second oldest. He attended Georgetown Prep, the same elite Catholic day school that Neil Gorsuch and Brett Kavanaugh would later attend. The Powells were well-to-do, but not well-to-do enough for Powell’s father to quit his law practice and take a sub-Cabinet job in the Nixon administration. So after college, Jay Powell resolved to follow the kind of career track he saw as exemplified by Republican George Shultz and Democrat Cyrus Vance: building a successful private-sector career that would make it financially feasible to serve at intervals in government.

Powell lives in Chevy Chase Village, a very wealthy Maryland suburb of some 2,000 residents just outside the D.C. border. His wife is the chairwoman of the village board, a thankless role in which she oversaw an acrimonious fight last year over a dog park that was constructed and then dismantled because neighbors complained of excessive noise; the Washington Post covered the controversy under the headline “Barking Dogs at Chevy Chase Dog Park Divide the Rich and Powerful.” Powell’s neighbors are overwhelmingly Democratic: Trump took just 19 percent of the vote in the village’s precinct in 2016.

Personally, Powell has a reputation for being amiable and likable without being too interesting. When I asked G. William Hoagland, his friend and former thinktank colleague, whether he could offer me any personal color on Powell, he told me that Powell would sometimes bike to work. In the course of my reporting, I have also learned that the Fed chair plays the guitar.

There are two big things you should know about Jerome Powell. One is that he is, essentially, an accidental Fed chair. A decade ago, Powell was an obscure thinktank fellow who had recently left a career that had taken him to the upper levels, but not the pinnacle, of the financial industry (including a stint as a partner at the Carlyle Group). He had served as undersecretary of the Treasury for finance in the George H.W. Bush administration but had been out of government since 1993. In his think-tank role, Powell was a useful partner to economic officials in the Obama administration, who spent much of 2010 and 2011 talking Republicans out of letting the U.S. government default on its debt payments and crash financial markets. So in 2011, when Senate Republicans vowed to block Obama’s nominations to the Fed’s board of governors unless he picked a Republican for one of the seats, Obama tapped Powell as his best option. Powell was confirmed to the Fed in 2012.