The Rise Of Scandal Insurance In Hollywood 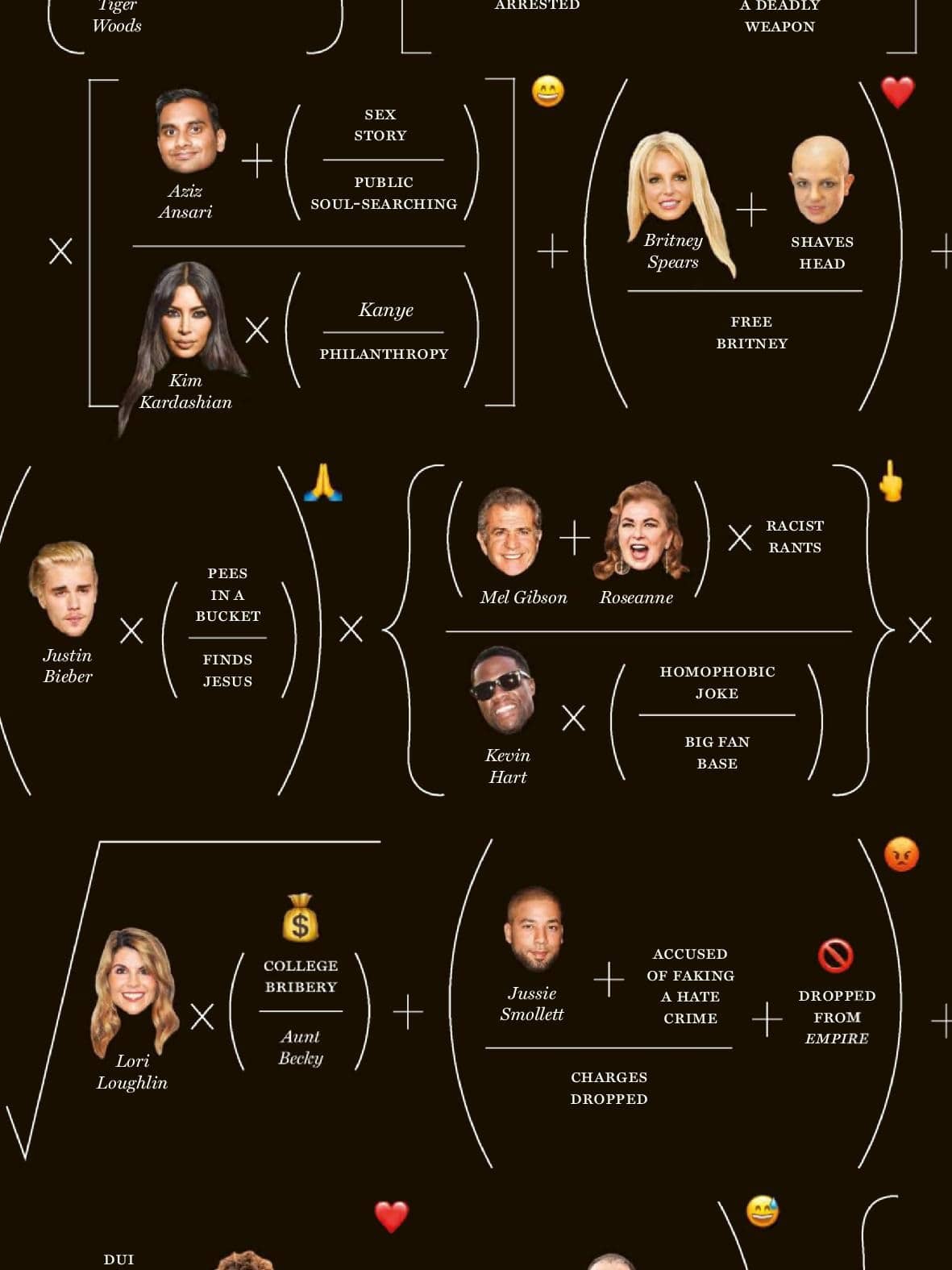 Can you indemnify against dick pics?

One month in June, a team of young data researchers gathered in the conference room of a Boston start-up called Spotted Risk to talk about celebrities who’d gotten themselves into trouble. Operations analyst Franki Slattery began the meeting by ticking off a couple of updates: Cuba Gooding Jr. had been arrested for allegedly groping a woman at a bar; soccer star Cristiano Ronaldo’s civil rape lawsuit had been moved to federal court.

Other “disgrace events,” as Slattery called them, were harder to categorize. Rapper Lil Xan had pulled a gun on someone at a 7-Eleven over a dispute about Tupac. “They’ve started describing the situation as ‘assault with a deadly weapon,’ ” rather than the standard gun possession, Slattery said. Also, Lil Xan had used the N-word. “Pardon my ignorance,” said Mira Carbonara, Spotted’s VP of commercialization. “Little whatever-his-name-is? Is he African-American?” He is not, but the ethnicity of the victim was unknown. They agreed to log it as a “hidden risk” for future racism.

In other news, Kim Kardashian was going to sponsor ride shares to ferry former prisoners to job interviews. It would be logged as a “cause,” a positive attribute, but was it also “politically outspoken,” a risk? Carbonara decided to split the difference; it was both a risk and an asset. Also on the agenda: The website All About the Tea had published seedy texts sent by former baseball player Jim Edmonds to a woman not his wife. “I wanted to add ‘sending explicit text while in a marriage/ relationship’ as a guideline to our current infidelity classification,” said Slattery. There was also the fact that “his penis and etc. are in the photos. Would we want to include the tag of ‘leaked nude photos’?” Spotted usually applies that term to photos leaked by the celebrities themselves, but the team agreed that a dick pic is a dick pic.

Edmonds’s behavior would be logged in Spotted’s database, which includes nearly 27,000 public figures, each correlated with 224 attributes and risk factors. And though the discussion often sounded like a TMZ staff meeting, these assembled gossips were doing the work of actuaries. Later this summer, Spotted plans to sell “disgrace insurance” to entertainment companies and commercial brands, making the risk of celebrity downfall as quantifiable and reimbursable as that of floods and car crashes.

Celebrity scandal is as old as the tabloids, but the type of protection Spotted will offer was hardly used even a decade ago. Under the studio system, the financiers were in control—their stars’ transgressions easier to cover up, their contracts easier to tear up. True outrages like the Fatty Arbuckle case were relatively rare, and when they happened, the machine smoothed things over and rolled on. But today’s stars are the machine, commanding millions in endorsement deals and the lion’s share of indie-film budgets and carrying billions in market value on the backs of their reputations.

Those reputations, meanwhile, are increasingly fragile. Ubiquitous video and social media, supercharged by #MeToo, have led to a proliferation of high-profile disasters—Miramax’s implosion, Kevin Spacey’s erasure, Roseanne without Roseanne—leading producers and brands to look for new ways to mitigate the risks of reputational collapse. Studios have hired risk managers, dug deep into stars’ backgrounds in search of red flags, and added “morals clauses” to contracts. They’ve also been asking around about insurance.

If SpottedRisk’s product takes off, it will join a small but growing industry of disgrace insurers. Like other new types of insurance (terrorism, cyberattack, active shooter), Spotted’s disgrace innovation reflects what we fear most in the 21st century. In this case, it’s the persistent, growing dread that a career-ruining fall from grace is always just a click away.

THINGS WERE GOING so well for All the Money in the World, a big Christmas Week release from pop auteur Ridley Scott starring Mark Wahlberg and Michelle Williams. Kevin Spacey was the ace in the hole as J. Paul Getty, the mogul who refused to pay ransom for his kidnapped grandson, raising the question, When you can buy anything you want, what is the price of a human being? In the case of Spacey, it was at least $10 million. On October 29, 2017, Adam Rapp alleged that the House of Cards star had made a sexual advance on him when Rapp was 14. Multiple accusers came forward over the next few days, and Scott and his financiers had to make an impossible choice: replace Spacey with another actor or risk box-office annihilation. The movie might ultimately live or die on Oscar nominations, and an Academy newly radicalized by the Harvey Weinstein allegations wasn’t about to reward a Kevin Spacey project.

By November 8, the financiers had decided to shoot the 87-year-old Christopher Plummer in Spacey’s role. That meant nearly two weeks of costly reshoots, extra fees for the other stars, at least a few hundred thousand for Plummer, and over- time for the crew and editors working nonstop—adding up to a quarter of the movie’s original $40 million budget, according to a report in Variety. And they would have to reassemble it all a month before the film’s release date.

This wasn’t the first time the loss of an actor had resulted in cost overruns and delays. It wasn’t even the first time for Scott, who’d had to work around the death of Oliver Reed on Gladiator. But death and disability have been covered by standard production insurance for decades with payouts that can easily exceed $100 million. Since Spacey wasn’t disabled or dead, but disgraced, the production picked up every penny of the tab.

Disgrace-insurance policies have existed since the 1980s; they arose as a category of contingency insurance (i.e., insurance against rare events) just as celebrity endorsements were transitioning from cheery ads with congenial father figures like Wilford Brimley to multiyear, multimillion-dollar contracts with megastars—Michael Jordan, Tiger Woods. Lloyd’s of London, the powerful insurance marketplace known for covering highly specialized risks (Dolly Parton’s breasts, a competition to find Bigfoot), put together the occasional high-limit disgrace package into the tens of millions. (In 2006, when Hannah Montana premiered, a clothing manufacturer took out a policy on its teen star, Miley Cyrus, in case any misbehavior affected sales.)

Most policies were much smaller, though, with limits rarely exceeding $5 million, and were worded so broadly it was almost impossible to get a payout. “I can’t think of a claim that was paid,” says Ringo Thompson, a London broker who has been selling entertainment insurance for three decades.

A standard Lloyd’s contract defined disgrace in vague terms—as “any criminal act, or any offence against public taste or decency … which degrades or brings that person into disrepute or provokes insult or shock to the community.” Most effective policies rely on precise terms and evidence that both sides can agree on—the Richter scale, a hospital bill. Subjective wording leads to disputes. Insurance “has to involve no litigation,” says Bill Hubbard, CEO of the entertainment insurer HCC Specialty Group. “You know the Supreme Court justice who said, ‘I know pornography when I see it’? You can’t settle claims that way.”

The contracts were much clearer on the definition of what didn’t merit a payout: Many of them exempted nonfelonious offenses and acts committed prior to the policy’s start date. Even if the All the Money producers had bought a policy, Spacey’s past transgressions might have been excluded, treated as preexisting conditions.