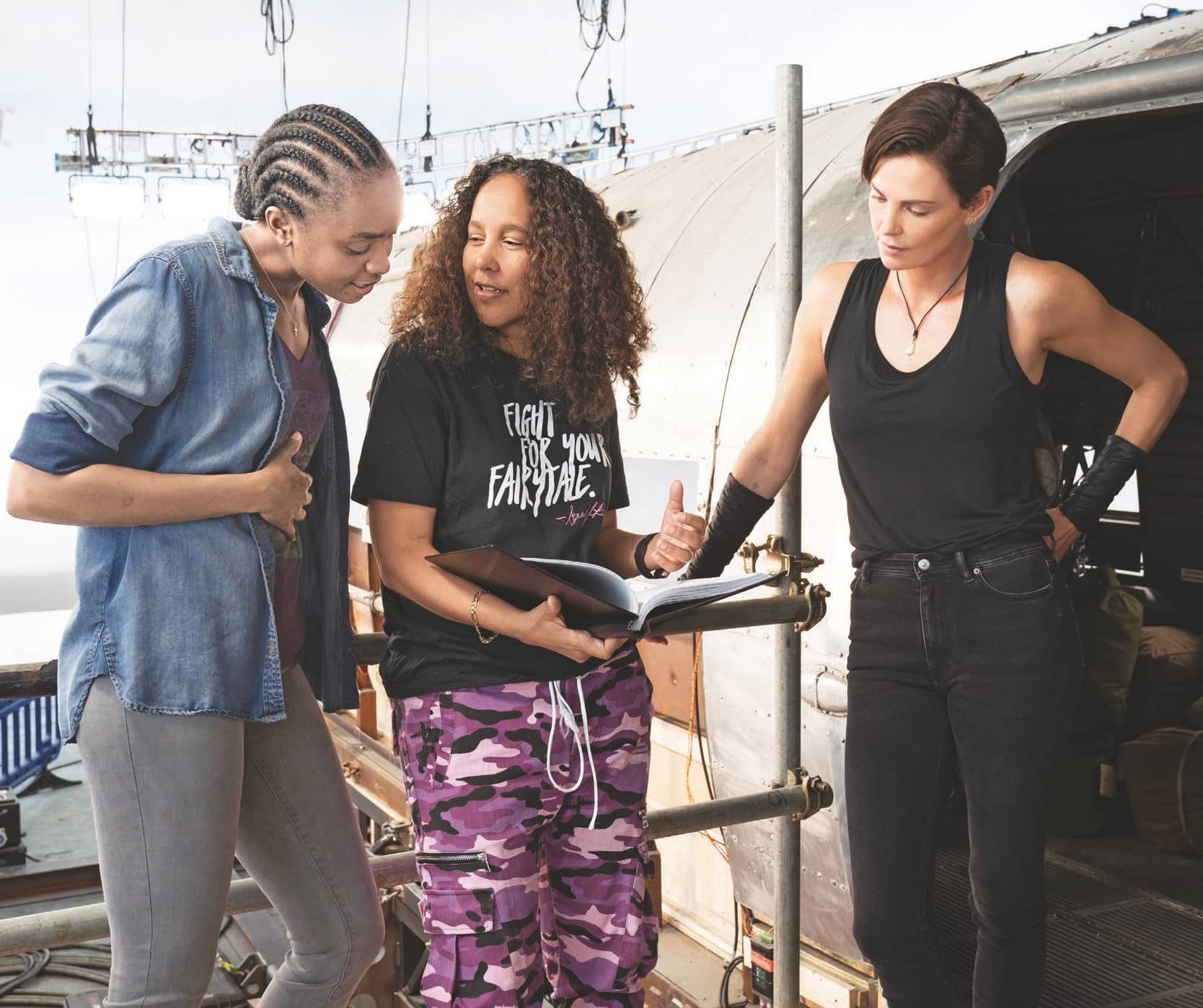 Gina Prince-Bythewood’s The Old Guard is an unlikely superhero film, both patient and intimate. But she’s always been uncompromising.

ABOUT HALFWAY through The Old Guard, Gina Prince-Bythewood’s upcoming film about a group of immortal warriors, something happens that I’m pretty sure has never happened before in a big-budget superhero comic-book movie: A man declares his love for another man. And it’s not just a corporate-approved, Disneyesque bit of tokenism, either. The men in question are Yusuf, a.k.a Joe (Marwan Kenzari), and Nicolo, a.k.a Nicky (Luca Marinelli), two members of the five-person team that gives the movie its title. In this scene, they sit handcuffed in the back of a van, surrounded by soldiers. Joe is checking to make sure Nicky is okay. “What is he, your boyfriend?,” one of the soldiers asks, chuckling contemptuously. Joe takes a long look at his captor and proceeds to give one of the most full-hearted declarations of love I’ve ever witnessed in a film.

“This man is more to me than you can dream,” he says, his voice trembling. “He’s the moon when I’m lost in darkness, and warmth when I shiver in cold. And his kiss still thrills me even after a millennium. His heart overflows with a kindness of which this world is not worthy. I love this man beyond measure and reason. He’s not my boyfriend. He is all, and he is more.”

Then the two lovers kiss, passionately.

The scene comes directly from the original comic book The Old Guard, by Greg Rucka, who is also credited with the film’s screenplay, and who stipulated in his contract that it had to be in whatever movie got made from it. Luckily for him, the person who made the picture was the director of Love & Basketball (2000) and Beyond the Lights (2014), two of the great romantic dramas of our time, films filled with the sweet despair of yearning. And she “would have fought to the death to keep that scene in,” Prince-Bythewood says, recalling that it was one of the reasons she wanted to do the film in the first place. It’s easy to see why: She makes movies that are textured with real-world detail, that take their time getting to know their characters’ hopes, fears, desires, even the kind of music they listen to. Her adaptation of The Old Guard is a superhero film like no other: patient, intimate, realistic—or at least as realistic as a movie in which Charlize Theron plays a 6,000-year-old warrior who splits dudes open with ancient weapons can be.

The Old Guard makes Prince-Bythewood the first Black woman to helm a major superhero film. The journey toward making it, weirdly, began with an entirely different superhero film. In 2017, it was announced that she would be directing Silver & Black, a studio feature built around Black Cat and Silver Sable, two characters from the SpiderMan universe, for Marvel and Sony. (She proved her comic-book-genre bona fides on the small screen by directing the series pilot for Marvel’s Cloak & Dagger.) Prince-Bythewood would spend a year and a half working on Silver & Black. “I was pretty far in—we were developing costumes,” she says. “But we were just not agreeing on the script. I came in with a vision, and that vision never changed.” It was while she was wrestling with Silver & Black that the script for The Old Guard arrived like a lifeline. Executives at the production company Skydance, looking for a female director, had been impressed with her work in Love & Basketball and Beyond the Lights. “It was everything I wanted to do in this genre,” she says. “With female leads, one being a young Black female. It was edgy and real, but still had that fantastical conceit to it.”

Prince-Bythewood, 51, has a calm demeanor that can make it seem like professional and personal setbacks are no big deal. She’ll often chuckle when discussing all the time she’s spent on movies that never happened. She’s speaking to me from the room in her L.A. home where she does all her writing. Her husband, Reggie Rock Bythewood, with whom she often collaborates (the duo created and executive-produced 2017’s Shots Fired, a Fox limited series about police violence and community unrest in a fictional North Carolina town), has his own office on the other side of the house. Behind her is a standee from Love & Basketball and a poster for Noni, the fictional pop star played by Gugu Mbatha-Raw in Beyond the Lights. On the walls are stills from all her films, as well as a photo of Kathleen Cleaver with the Black Panthers. “Every time I sit down to write, I feel like I forgot how to do it,” she says. The pictures remind her, “Okay, you do know how to do it. It will come. Just be patient.”