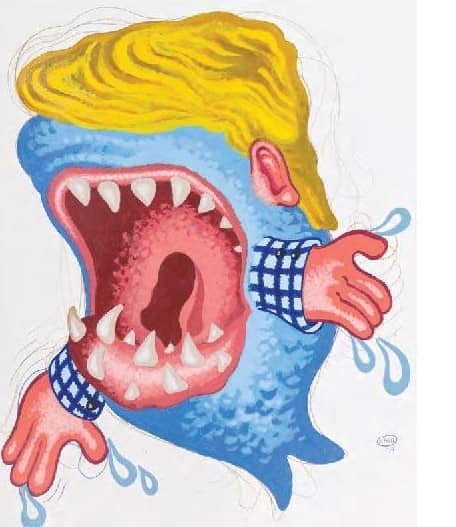 And Now, for My Last Act The danger (and ineptitude) of Trump’s failed coup.

IN HIS ADDRESS to the Democratic National Convention in August, Barack Obama warned that the Trump administration “has shown it will tear our democracy down if that’s what it takes to win.” Kamala Harris began her first speech as vice-president-elect by saying “America’s democracy is not guaranteed.”

Some may have dismissed this as mere hyperventilated campaign rhetoric. But in the days that followed the election, Trump fulfilled the stark prophecies. He has seized whatever powers he still has in his grasp to rattle the system and to take vengeance against his successor by leaving him with a ruin.

Trump has attempted to retain power much as he wielded it throughout his term: with a comic ineptitude of his means that made it difficult to absorb the seriousness of his ends. If you had predicted four years ago that Trump would finish his term by proposing to cancel the election and reinstall himself in a second term, you’d have been brushed off as a hysteric. And yet here he is attempting to do just that and recruiting Republican allies to his mad scheme. The certainty of his failure does not make the damage caused by the coup effort disappear. It simply makes it harder to see clearly. The surreality of Mussolini continually slipping on banana peels is the defining paradox of this sordid era.

To lead his attempted coup, Trump has turned once again to Rudy Giuliani. Just weeks before, Giuliani—who is the subject of a criminal investigation for his efforts to shake down Ukraine while working for Trump and who was colluding publicly with a man identified by the U.S. Treasury Department as a Russian spy—had produced what he called “evidence” of a global criminal plot by Joe Biden and his family. (Many people on the right spent the last ten days of the campaign scolding the media for failing to take his accusations seriously.) In the aftermath of the election, Giuliani emerged to claim he had uncovered yet another worldwide plot—this one even wider and more sinister in scope.

Giuliani has decried the sequence of ballot tabulation in Wisconsin, Pennsylvania, and Michigan, where Trump initially registered a lead only to have mail ballots, counted over the following hours and days, reveal that Biden had won. Giuliani called this outcome “almost statistically impossible,” claiming that an unknown expert had proved its implausibility. In fact, this very outcome had been widely and publicly forecast for weeks. Trump had urged his voters to cast their ballots on Election Day and prevailed upon Republican legislators in those states to ban early counting of mail ballots— precisely so that the first announced vote totals would give him an illusory lead.

In the weeks following the election, Trump’s legal team filed a blizzard of lawsuits in battleground states, losing virtually all of them, often in humiliating fashion. After Trump supporters in Pennsylvania sued for being barred from observing the vote count, then admitted in court they had been present to observe it, a judge asked, “I’m sorry, then what’s your problem?” One of the Trump lawsuits alleging irregularities in Michigan vote totals turned out to be based on having confused that state with Minnesota and comparing vote totals in the former with the population of the latter.

A judge in Michigan dismissed accusations of ballot fraud that had “no date, location, frequency, or names of employees” and noted that Trump’s witnesses were simply inventing corrupt motives to explain legitimate vote-counting methods because they didn’t understand how the process worked. “Perhaps if Plaintiffs’ election challenger affiants had attended the October 29, 2020, walk-through of the TCF Center ballot counting location,” the judge wrote, “questions and concerns could have been answered in advance of Election Day.”

At one court proceeding, a judge asked Giuliani, “Are you arguing, then, that strict scrutiny should apply here?” If you have ever attended a few weeks of law school—or, like me, just taken an undergraduate class on constitutional law—you’d recognize the question. Equal-protection cases, like the one Giuliani was attempting to argue, require either “strict scrutiny” or “intermediate scrutiny,” depending on the type of discrimination alleged. Giuliani sounded confused and unfamiliar with the terms. “No, the normal scrutiny should apply,” he said. The judge gently informed him that “normal scrutiny” is not an option.