The Bong Next Door - Inside America's Most Stoned Suburbs 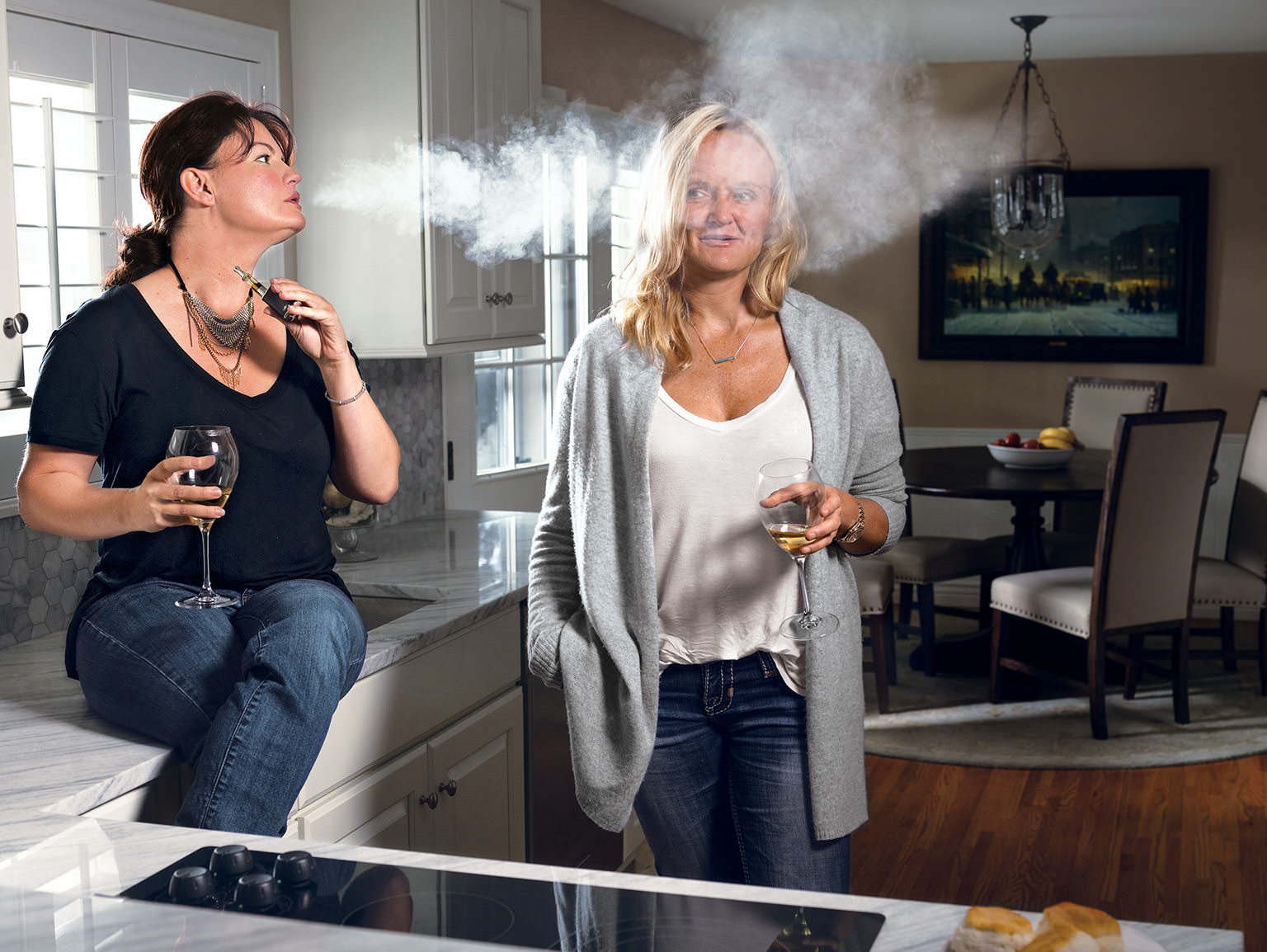 Ambling through America's most stoned suburbs.

Should we smoke before we pray?”

Cynthia Joye asked, tapping the Bible resting on her lap. Joye had just arrived at her friend’s home in Centennial, Colorado, a suburb south of Denver, for the fifth or sixth meeting—it was hard to keep track—of Stoner Jesus Bible Study. “I think the plant is sacred,” said Joye, a 51-year-old mother who wore her gray hair in a ponytail, as a pair of pipes made their way around the circle. “It puts people in a frame of mind where you think of God.”

“The Bible didn’t say you couldn’t smoke weed,” said Mia Williams, who had been raised a Southern Baptist. Someone cited Genesis 1:29—“And God said, ‘Behold, I have given you every herbbearing seed’ ”—and though no one smoked when they went to church, everyone agreed that Jesus wouldn’t mind if they did. “Jesus didn’t hang out with the Pharisees,” Joye said. “If somebody passed him a pipe, he wouldn’t say no.”

Stoner Jesus Bible Study is the creation of Deb Button, a 40-something mother of two who had never considered smoking pot until last year, when Colorado became the first state to legalize recreational marijuana for adults over 21. “I was majorly conservative,” said Button, who was wearing a navy cardigan and jeans cuffed at the calf. Earlier this year, while going through a divorce, she’d tried an edible on a friend’s advice. This had proved a revelation. “I expected to see unicorns,” Button said. “But when I started smoking I just got so connected to God.” Joye was the only person to show up when Button posted a listing on Craigslist for Stoner Jesus Bible Study; she arrived to find Button “so baked out of her head she forgot that she’d invited me over.” They talked for four hours.

By early October, the group had grown to include a Catholic, a Mormon, a member of the Greek Orthodox church, and a curious atheist. Button and Joye had gone to a dispensary that afternoon and loaded up on sativa, a marijuana variety said to boost creative thinking; indica, the other major variety, is supposed to be less conducive to lively textual analysis. (It’s also known as “in da couch.”) For discussion, Button had chosen one of the Beatitudes—“Blessed are the poor in spirit, for theirs is the kingdom of heaven”—and Joye started off the conversation by noting that though she typically fell asleep if she tried watching Game of Thrones high, reading the Bible in a similar state was a “transcendent experience.” “When I’m stoned, I can’t read fast, so I look at every word,” she said. “Like, what does each one of those words mean? Who’s ‘poor’?”

A High Plains chill crept over Button’s back deck as Stoner Jesus Bible Study entered its third hour, by which time the weed had pretty well circulated through everyone’s bloodstream. The atheist could barely keep his eyes open. Joye wrapped herself in a zebra-striped blanket and started giggling uncontrollably when another member said a particular biblical phrase came from a Greek word.

“When you think about physics and space and time, my favorite thing to think about lately is that we never, at any moment, actually exist,” Joye said, to a chorus of mm-hmm’s. “We are either remembering the past or anticipating the future, and to be in the now is where eternity is. Because it’s always now. But we’re always thinking in terms of the past—or the future.” She paused. “Sorry, I got off track.”

Centennial, Colorado, is, according to the local paper, “suburbia personified.” It has some of the state’s best schools, a midnight curfew for minors, and one of America’s largest Ikeas—along with, for what it’s worth, the regional headquarters of the Drug Enforcement Administration. Pretty much all anyone in Centennial can talk about these days is the ever-escalating price of real estate and the snarled traffic, both of which they blame in part, and with some rationale, on marijuana. People are moving to the state in droves, and over the last year, sales of recreational weed have doubled. Americans are getting high across the country, of course—nationally, pot use has doubled in the past ten years—but nowhere are they doing so more freely than in Colorado. The smell of marijuana warehouses along I-70 is now so strong that grateful residents report it has finally overpowered the stench from a nearby Purina plant.

Colorado hasn’t turned into a horde of stoned zombies, as some swore it would, but legalization has produced considerable social and cultural confusion in places like Centennial, which might as well be Bethesda or Montclair, except that, as one young mother said, the Saturday-morning sidelines are now a much happier place: “It used to be that everyone complained about the bottle of wine they drank on Friday night. Now, they just ate an edible.”

Joanne Miller is a teacher’s aide in Centennial whose name is not actually Joanne Miller. She tried pot, briefly, when she was much younger, but the experience left her feeling “naughty.” As an adult, she struggled with anxiety, and during her “overwhelmed-mommy phase, when half of my friends were on anti depressants and the other half were on Valium,” Miller’s doctor prescribed her 90 Xanax a month. After legalization, the idea of something more naturally soothing was attractive, but the thought of visiting a dispensary, and being seen by someone she knew, was too much to bear. “I just couldn’t bring myself to do it,” she said. Miller remained curious about pot, despite her hesitation, and one day this summer, her adult daughter, who was visiting from the East Coast, told Miller she wanted to go to a dispensary. “Well, I hope you’re gonna share, because I’ve been dying to try one of those gummies,”

Miller told her daughter. A few days later, on a family camping trip, she ate half of one. “When I got up from the campfire and went in to get ready for bed, I couldn’t get my shirt on,” she recalled. “I couldn’t figure out the zipper on my sleeping bag. I was flailing.” She was determined to try a gummy again, and a few weeks later, after making sure to finish cooking dinner, she ate the other half while her husband drank a martini. She started feeling weird as they sat down to watch a movie. “Oh my God,” Miller told me a week later. “I can’t even remember what movie we watched.”

The bad early edible experience has become a common one in Colorado—Deb Button had one, too—so much so that Coloradans refer to it as simply “pulling a Maureen Dowd,” in honor of the New York Times columnist who ate an infused chocolate on a trip to the state and wrote about finding herself “panting and paranoid” in her hotel room. Easing new consumers like Miller into the fold is thus a matter both of education—Dowd had eaten many times the recommended dosage—and of branding. “Cannabis” not “weed,” “lifted” not “stoned.” “What if we were like, ‘Oh my God, I got so lifted last night while I decorated for Halloween,’ ” said Jane West, who runs a cannabis-centered events company. She was still wearing a Lululemon top and Birkenstocks when she stopped by her office between yoga and her son’s field trip to a local pumpkin patch. “Say you’re a mom in the suburbs on a Wednesday night, it’s 9 p.m., your kids are in bed, and you have nothing but a boring to-do list in front of you—laundry, making a grocery list, packing up the lunches, and then, if you have time, watching one show,” West said. “If I can do all that stuff a little high, I’m happier.”

A number of dispensaries are competing to become “the Apple Store of cannabis”—a place where the “canna-curious” feel comfortable buying pot for the first time. “I want this to look like a place where 40-year-old people walk in and go, I feel at home,” said Tim Cullen, who runs Colorado Harvest Company, a dispensary near Centennial that has nine computers around a U-shaped table for people to browse the 20 different strains of marijuana on sale, which retail for anywhere from $20 to $40 for an eighth of an ounce—enough to roll about seven joints. For those still too shy to visit a dispensary, Healthy Headie Lifestyle aspires to be “the Mary Kay of Mary J,” sending saleswomen into the living rooms of fellow moms to both educate and sell vaporizers, which are generally seen as the future of suburban pot consumption. (They are healthier and leave less of a lingering smell.) Becca Foster, a 41-year-old mother of four who hosts Headie parties, had never smoked until last year: The first couple of times, she ended up ordering food from the Taco Bell where her teenage son works. Recently, while getting a facial, she struck up a conversation about pot with her beautician, who didn’t smoke but still invited Foster to a Botox party she was hosting, to talk vaporizers while everyone waited to receive their injections.