THE CITY'S PERMANENT GOVERNMENT” HAS ALWAYS BUILT ITS WAY OUT OF CRISIS. BUT WHAT IF IT CAN'T? 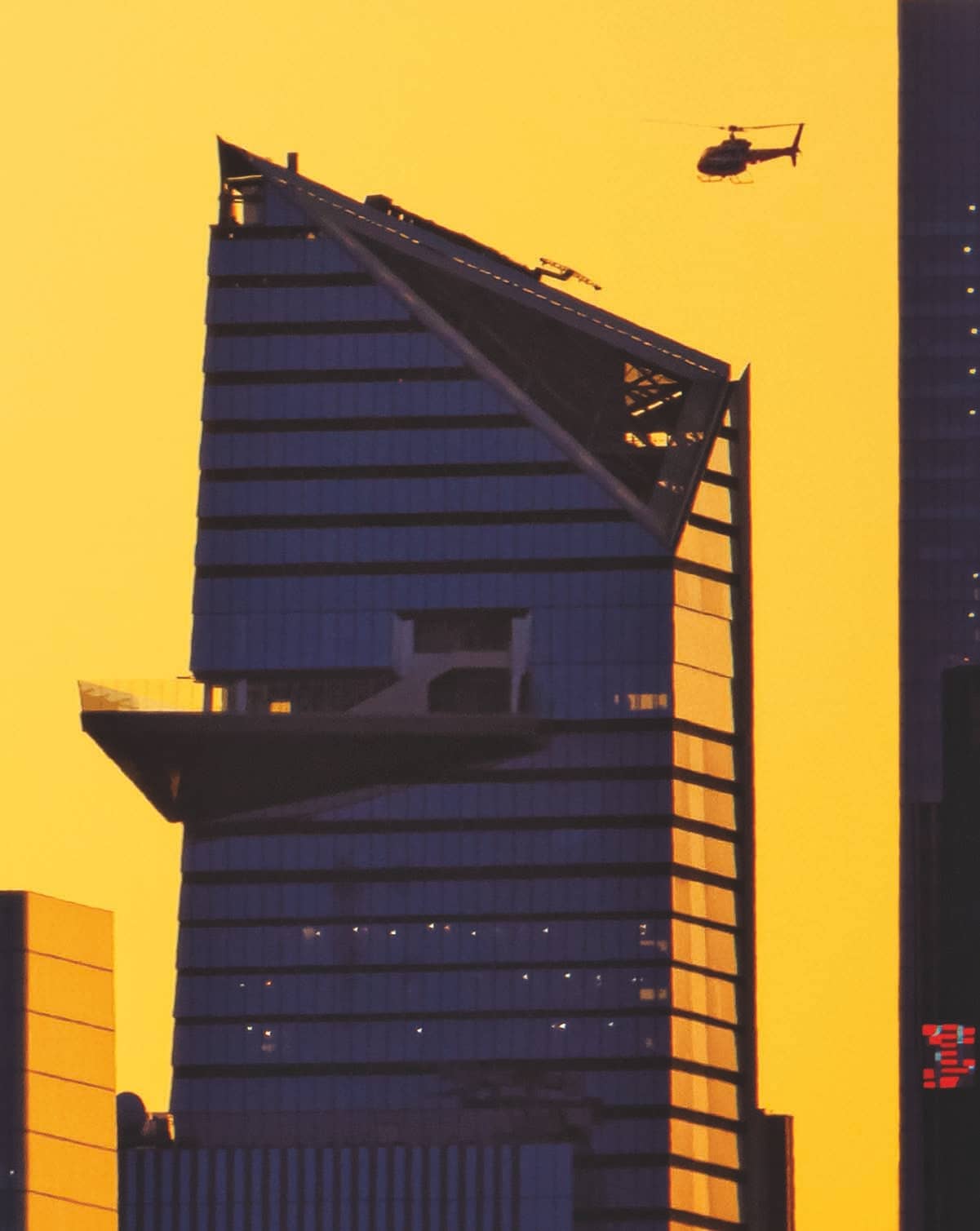 The Panic Attack of the Power Brokers

ONE LATE-AUGUST MORNING, I met former New York governor Eliot Spitzer at Hudson Yards, the lavishly subsidized $25 billion real-estate development that will one-day house Facebook offices, investment funds, and the pharmaceutical firm Pfizer. I found him at the base of an unfinished skyscraper, where a marketing banner draped across the scaffolding read reset expectations.

Spitzer was wearing a mask, a green gingham shirt, and bookish horn-rimmed glasses. The former governor is now a builder, having returned to his family’s real estate business after self-destructing in politics. He had been talking to me intermittently since the middle of the summer, analyzing the pandemic as someone with a deep personal investment in the health of the city. “I don’t know when people are coming back to these buildings,” Spitzer said as we strolled north toward the site of a mixed-use project he is constructing in partnership with the Related Companies, the main developer of Hudson Yards. “At first, the optimists were saying, ‘This will be a three-week shutdown, and by Labor Day it will be back to normal.’ ” Now the emergency evacuation had settled into a state of semi-permanent dispersal.

That day, the city would record just 281 cases of covid-19, close to its low since the pandemic began, and life in the city’s residential neighborhoods had returned to a pleasant rhythm, with people dining on the sidewalks and Instagramming sunsets in the park. But the whirring core of Manhattan still felt weird and abandoned. It was a little before 11 a.m. on a weekday, and there was not a single office worker insight. Chairs were stacked on tables inside the Maison Kayser sandwich shop at Hudson Yards, where a sign on the door read closed until further notice. The chain was bankrupt. So was Neiman Marcus, which had recently announced it was abandoning the 50-year lease on the department store it had just opened in the Hudson Yards mall. Only 8 percent of Manhattan’s 1 million office workers were now estimated to be back at their desks, compared with 20 or 25 percent in other U.S. metro areas. Around Times Square, where almost a quarter of the retail locations were available for lease this spring, disorder and vagrancy had crept into the negative space.

The present crisis encompasses aspects of every challenge New York has faced in recent memory. Like Sandy, it is a natural disaster. Like the 2008 financial crisis, it has caused a surge in unemployment and poverty. Like 9/11, it is a mass-casualty event and a psychological trauma. As in the 1970s, the city government faces a fiscal crisis with tax revenue projected to plummet. And it is all wrapped around an unprecedented crisis of authority, which confounds any attempt to organize a response.

“We presume that since New York has been the epicenter for as long as we can recall, that there is an inevitability to that fact,” Spitzer told me. “And yet there isn’t. This is the first moment when I seriously worry about the city’s place—economically, culturally, socially—because the social fabric of the city is being torn apart.”

Spitzer led us to West 35th Street, where concrete mixers were churning outside his development site. “See the foundation walls?” he said, as we peered through a little window in the plywood barrier surrounding the construction. “That is going up 50 stories, and a year and a half thereafter, this building will be occupied.” Phase one of the project is a residential tower. Phase two is the office building; it will need to sign an anchor tenant in order to go forward. For now, that part of the site was occupied by a white tent: a covid testing center.

Construction is one of the few industries that have continued mostly unabated, but history shows it to be a lagging indicator. Real-estate projects take years to design, finance, and build, and they can be overtaken by unexpected events. Spitzer said he was “shoring up the bulwarks” at his company, slowing down future developments until the economy strengthens. “If there’s a 10 percent drop in office demand,” Spitzer said, “it’s going to ripple through the market in a very real way.”

In past crises, the city has tended to build its way out of its problems, offering substantial subsidies to developers and corporate tenants to revive Times Square and reconstruct the World Trade Center. When the 2008 crash hit, the city spent hundreds of millions of dollars to backstop the finances of Hudson Yards, ensuring that the most expensive real-estate development in American history would continue forward.

Government officials saw projects like Hudson Yards as necessary engines of the city’s prosperity. “If you believe that growth is good, Hudson Yards is spectacular,” Spitzer said. Launching new office construction when almost no one is going to offices every day may seem ludicrous, but that is the way New York’s political class has always approached the process of recovery, assuming that the city—and demand—will inevitably rebound. That premise is now up for question. The longer all those skyscrapers remain empty, the less essential they seem. At the same time, a new class of progressives is successfully crusading against corporate power and megadevelopments. As the largest contributor to the city’s tax base, and a major campaign contributor, real-estate developers have grown accustomed to having sway over issues of economic development. But the insurgents were opening the Overton window and shoving them right out.

As a Democrat and a developer, Spitzer was stunned by the reversal. “What’s wrong with building a building?” Spitzer asked, as we watched a crane lift a piece of steel up the face of the new Pfizer headquarters. “Where did this city come from?”

IF THE ENTIRE real-estate industry is filled with anxiety, there’s still a hierarchy of distress. The multigenerational family companies, like Spitzer’s, tend to be less heavily leveraged, which should allow them to ride out the pandemic. (Or so they say—they’re extremely private companies, so who knows?) The public real-estate companies are more exposed to market forces. SL Green Realty, which opened a $3 billion office tower next to Grand Central in September, has seen its stock price fall by nearly half since the pandemic hit, and its latest SEC filings warn that the “severe disruptions” from covid could continue to depress rents.

More imperiled still are the adventurous investors—the ones who are building condo towers catering to foreign billionaires or who borrowed heavily to buy high on speculative trends. Spitzer broke down the math: “If you bought a building presuming that you’re getting paid $100 a square foot—presumed the next year the rent was going to be $110, went to a bank and borrowed based upon the $110, and then suddenly your rents go down to $70 and you need $80 in rent just to pay your mortgage and operating expenses—you’re finished.”

Also finished, in all probability: anyone dependent on restaurants, shopping, or tourism. Jared Kushner’s family firm, for instance, is in danger of losing the retail space it owns in the old New York Times Building on West 43rd Street. The state of the hotel industry, which has come to almost a complete halt, is ruinous. “How long can people stay submerged without running out of oxygen?” asked Vijay Dandapani, the president of the Hotel Association of New York City. Around 140 of the city’s 700 hotels have been rented to the city as homeless shelters, Dandapani said. Many have closed, and he estimates that “well over 100” will never reopen. Broadway theaters, a major tourism driver, are dark. The industry’s trade association announced last Friday that it was shifting the target date for reopening to the end of the spring; a source familiar with the plans said even that was unrealistic, given the unique challenges presented by live theater. “Believe me,” he said, “we are far from theaters being opened by June 1.”

Office landlords are in a comparatively insulated position, since the industry practice is to sign long-term leases. But some are more vulnerable than others. In recent years, many older buildings have been repositioned for co-working, which has been devastated by the pandemic. Many small firms and start-ups have been unable to pay rent. “There’s been a lot of pain, a lot of unpleasant conversations,” says a landlord with a large number of troubled startup tenants. “It’s a weird responsibility for me. You’re dealing with hundreds of these people. You don’t have any real information about how to do it. On the one hand, it’s not my job to be a philanthropist, and I’m not their partner. On the other hand, it’s in my interest for them to survive.” He says if there’s “realistically zero or close to zero” chance of renting the space for the foreseeable future, “giving them a big rent break might be psychologically scarring but totally rational.”

“If they don’t come up with a stimulus package now, the smaller tenants are all going under,” says Jeffrey Gural, a prominent office landlord who told me that, like many landlords, he is now willing to negotiate. “The market has changed, and I have to accept that.”

For the large corporate tenants that populate Manhattan’s premier office buildings, there is less flexibility. “One of the great fictions out there right now is that leases contain trapdoors,” says Mary Ann Tighe, the head of the New York region office for the commercial brokerage CBRE. Short of declaring bankruptcy, as Neiman Marcus did, there is little way for tenants to extricate themselves from their legally enforceable leases.

That hasn’t stopped some companies from trying. Condé Nast recently told the New York Post it was shopping around for new space as it asked its landlord at One World Trade Center to bring its rent “into line with current market conditions.” (The negotiations appear to have gone nowhere.) In July, the law firm Simpson, Thacher & Bartlett sued its landlord for $8 million in a dispute over rent of its unoccupied offices. There has been an increase in “shadow” office space available for subleasing— around 14 million square feet currently, according to CBRE—although its share of the overall available market, 25 percent, has not yet reached the glut levels seen during the 2008 financial crisis.