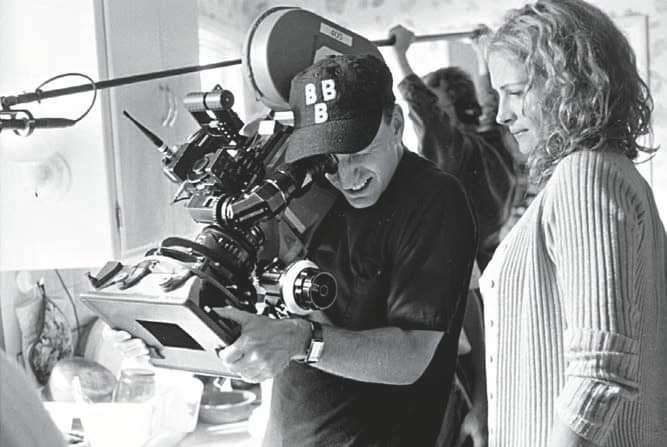 The director on the high-speed production of High Flying Bird.

It was a late-winter afternoon in 2018, and Steven Soderbergh was premiering his newest movie aboard a Manhattan-bound Amtrak train. Earlier that day, in Philadelphia, the director had finished production on the basket ball-business drama High Flying Bird, about a quietly insurrectional sports agent, played by André Holland, who is trying to outmaneuver the NBA during a lockout. Now he and Holland were zipping back to New York, watching portions of a rough version of the movie that Soderbergh had finished editing just hours after filming wrapped. The 56-year-old filmmaker is famously efficient: On his Cinemax series, The Knick—on which he served as director, cinematographer, and editor—he cut footage together while being driven back from the set. But on High Flying Bird, Soderbergh was able to shoot and complete a first edit on an entire 90-minute film in just a few weeks. “We moved fast on The Knick,” says series co-star Holland. “We moved even faster on High Flying Bird. If anything, there was an intensified energy to his approach.”

A year after High Flying Bird’s marathon shoot, Soderbergh—dressed in corduroy pants and a blazer, plus a T-shirt he produced featuring a license-plate number from The French Connection—is in Los Angeles, working in the Hollywood offices of his friend David Fincher, director of Gone Girl. There’s a Fincher-face Pez dispenser sitting nearby and a bar of Fight Club soap. The two have been close since the early 1990s; Fincher even sent Soderbergh a rough cut of Gone Girl, asking for feedback. (“We always show each other stuff,” Soderbergh says.) Over a weekend, Soderbergh edited his own cut of the film and sent it back.

Soderbergh’s obsession with editing began decades ago, when it was the only job he could get. In the early ’80s, not long after graduating from high school, he worked a series of editor-for-hire gigs, including a stint on the short-lived sports competition series Games People Play. “Editing is the first thing I understood,” he says. “What lit me up immediately was the power of it. You’re pulling from all these other skills and mediums.”

Now Soderbergh blazes through productions with the aid of small crews and relatively low-cost technology, creating (and breaking) new personal edit-speed records along the way. This rapid-response approach began on Che, the two-part 2008 biopic he filmed digitally, which allowed him to dig into dailies just hours after the cameras stopped rolling. By the time of 2011’s Contagion, Soderbergh was cutting together entire sequences while winding down over dinner in the bar of the Peninsula Chicago hotel. “We’d wrap, I’d get cleaned up, and then I’d go to the bar and sit with the brain trust,” he says. “I would pass the headphones to a producer or to whoever was around and say, ‘Take a look.’ ”