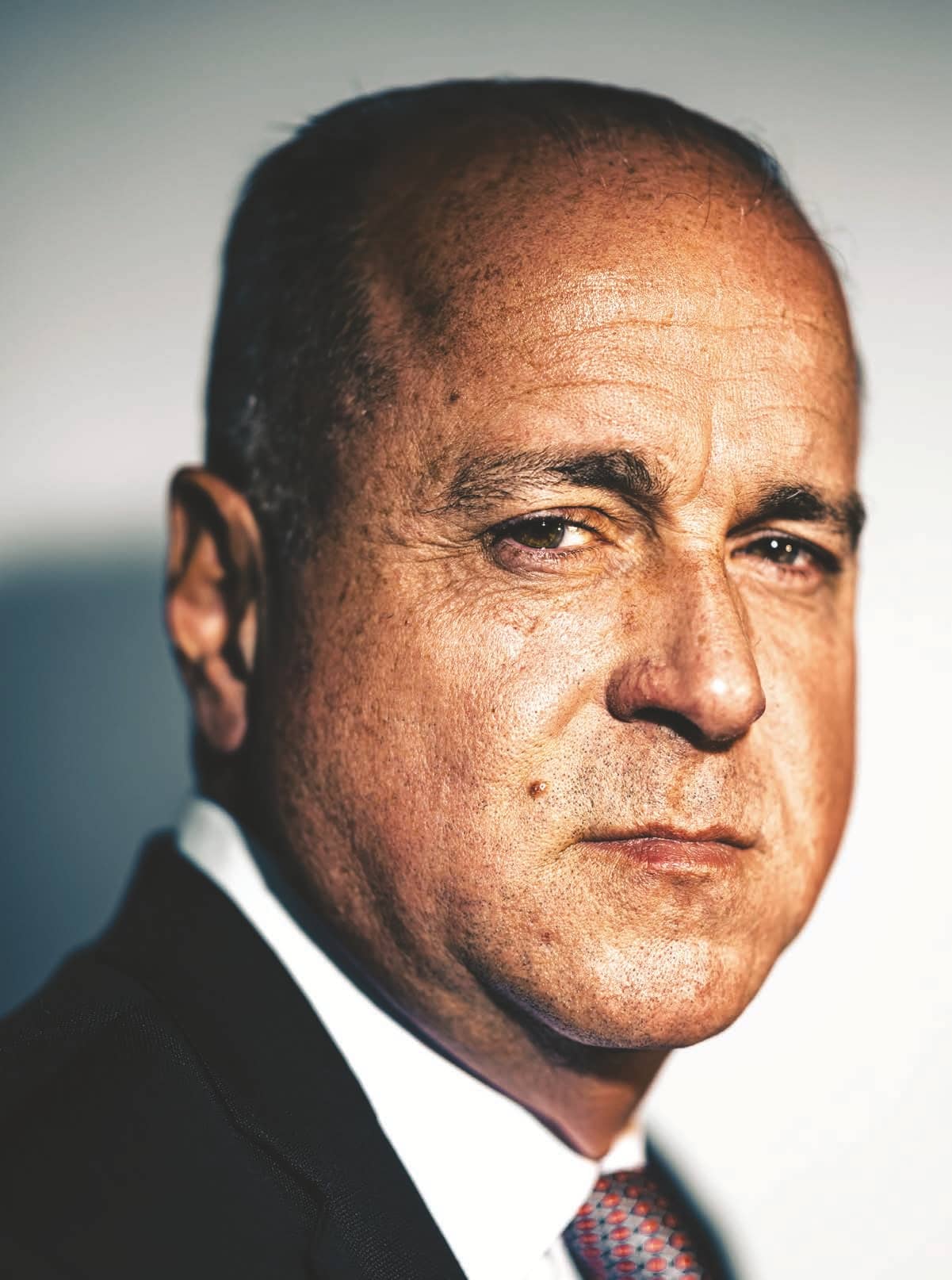 As president of the NYPD’s sergeants union, ED MULLINS has become the city’s most virulent opponent of police reform.

ON A RECENT Monday morning, Joe Piscopo—“former Saturday Night Live superstar”—used his AM-radio show to decry the plight of Italian Americans. City officials in Newark, New Jersey, had just taken down a statue of Christopher Columbus, and Piscopo feared other effigies of the Italian explorer might be under threat. “If these creepy losers, these thugs, go near that statue in Columbus Circle, we will mobilize,” he vowed. Then he welcomed his next guest, who picked up where Piscopo left off without missing a beat.

“I was just listening to you talk about the Columbus statue and the attack on the Italian Americans, and you’re 100 percent correct,” said Ed Mullins, president of the Sergeants Benevolent Association, which represents nearly 5,000 officers of the NYPD. “We’re wiping away our history, and we’re painting Black Lives Matter signs in the streets.”

As a regular on the conservative-media circuit, Mullins has perfected the art of playing directly to the fears of older white voters. “What they’re attacking is the fiber for what we believe in. They’re attacking law and order and authority. When they get past us, Joe, they will be in your studio taking control of the message. They will be in people’s homes taking control of their homes, running the subways, not letting children play in parks. The silent majority cannot sit by and be silent.”

When they get past us. Mullins didn’t say who “they” were, but it was clear whom he meant by “us”: the brave men and women of the NYPD. The city’s 36,000 police officers are represented by five different unions, each covering a specific rank—patrol, detective, sergeant, lieutenant, and captain. The SBA is relatively small compared with the Police Benevolent Association, which has 24,000 dues-paying members, making it the country’s largest municipal police union. Patrick Lynch, the president of the PBA, has played the most high-profile role in combating attempts by lawmakers and activists to curtail police abuses, often in brash, hyperbolic sound bites. “We have a progressive mayor that’s anti-police, the City Council that’s anti-police, and the statehouse is anti-police,” Lynch recently complained to President Trump. “They’re changing the law, where it’s becoming impossible to do our job.” 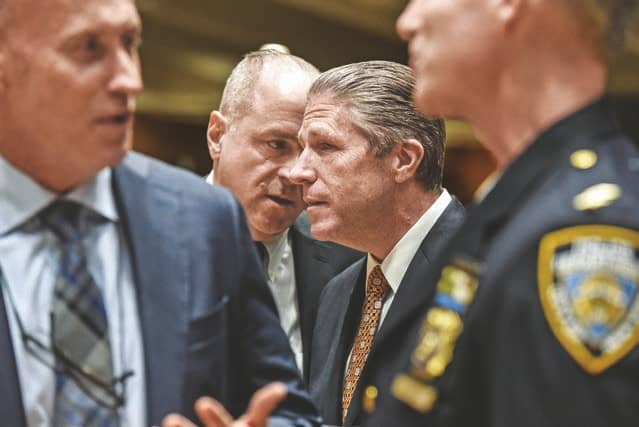 But talk to anyone familiar with New York law enforcement—from NYPD brass to city and state lawmakers—and they will tell you that, compared with Mullins, Lynch is a genteel statesman. Whatever his union lacks in size, Mullins makes up for in maximalist rhetoric. Over the past nine months alone, he has called Mayor de Blasio a liar, a disgrace, and “full of shit.” He declared war on the mayor on behalf of the entire NYPD and used the union’s Twitter account to dox de Blasio’s daughter, calling her a “rioting anarchist.” Mullins claimed that by enacting bail reform, Governor Cuomo was “holding down the hands of a victim while they’re being raped.” He denounced high- ranking police officers as “whores” for kneeling with protesters, and he called Dr. Oxiris Barbot, then the city’s health commissioner, a “bitch.” When I asked him, recently, how his members were served by such vulgar remarks, Mullins insisted that his approach is no different than tweeting the phrase black lives matter. “It draws attention,” he said.

During his nearly two decades as president of the SBA, Mullins has used that attention to fend off virtually every attempt, no matter how modest, to curb police brutality and corruption. In his view, police are not above the law. Rather, the law should empower police to operate however they choose, almost entirely free of oversight or consequence. If the pace of police reform seems glacial, even in the wake of the global uprisings over the death of George Floyd, that’s because Mullins has helped push the outer edge of the debate so far to the right that even the smallest compromise seems unthinkable. In 2003, he suggested cops should be allowed to sue the estates of people they shoot for emotional damages. In 2006, he demanded Mayor Bloomberg apologize for saying he was “deeply disturbed” that police shot Sean Bell, an unarmed Black man, 50 times. He has fought against mandatory Breathalyzer tests for cops who fire their weapons on duty and defended an officer who was caught on video smashing a handcuffed 14-year-old through a window. The union has deployed its lawyers to protect sergeants accused of sexual harassment, racism, manslaughter, fudging crime complaints, and drunkenly shooting up an ATM. In 2017, when Brooklyn College asked NYPD officers in need of a bathroom break to respect the wishes of students by steering clear of most restrooms on campus, the SBA hinted darkly about the threat of active shooters and terrorists. “Maybe,” the union tweeted, “it’s time people get what they ask for.” 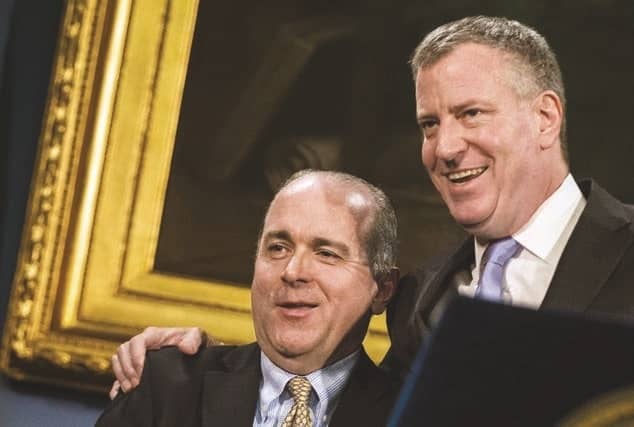 Name-calling and threats aside, much of Mullins’s power comes from his longevity— and his ability to cause trouble for his superiors. “He has been a thorn in the side of four commissioners,” says Bill Bratton, who served as police commissioner under de Blasio and Rudy Giuliani. “He has always been a pain in the ass.” Mullins also enjoys fierce loyalty from the rank and file, who love his zealous, uninhibited defense of cops. As one sergeant described it to me, “Mullins speaks the truth.” By staying on the offensive, this leader of a small, little-known labor union has forged an outsize role in the national debate over the use and overuse of force by law-enforcement officers. Patrick Lynch, who has the hair and temperament of a college-basketball coach, maybe the face of police defiance, but Ed Mullins is its angriest and most unfiltered voice.

“Mullins is a wartime leader,” an anonymous poster wrote recently on Law Enforcement Rant, a popular message board where current and former NYPD officers go to vent, often in explicitly racist terms. “He has a backbone of steel. God bless you, Sarge, I’d follow you anywhere.”

I’M A PATRIOT,” Mullins told me, minutes after his appearance on Piscopo’s show. “I’m basically for people enjoying their lives. I don’t care what the color of their skin is.”

Mullins was sitting behind his desk in the union’s headquarters in Tribeca. Like roughly a quarter of all NYPD officers, he drives into work each day from his home on Long Island. He hadn’t put on his tie yet, and, like the other SBA officials milling around the office, he wasn’t wearing a mask. He was, however, wearing a gun on his belt. The union’s bylaws require its president be a police officer, which means Mullins, though he works full-time as a labor boss, is still a sergeant in the NYPD. In 2018, he was paid $130,542 by the city and $86,818 by the union.

For half a century, police unions were the rare labor organizations that enjoyed the favor of both union-loving Democrats and law-and-order Republicans. Now, as calls mount to “defund the police,” unions like the SBA are facing an unprecedented level of criticism and scrutiny. “More and more of the public is becoming educated about what a destructive role the unions have played,” says Joo-Hyun Kang, director of Communities United for Police Reform. 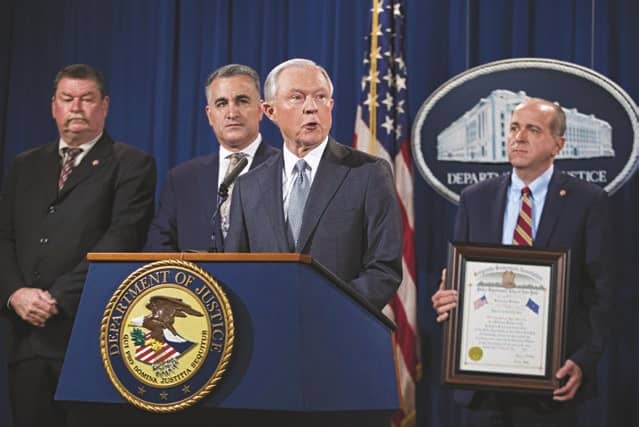 But if Mullins is worried about his union’s future, he doesn’t show it. In-person, he is jarringly friendly and polite, his New York accent softened by his drowsy cadence. “I know that the newspapers try to label me a racist,” he told me. “But it’s totally indefensible. They don’t know me. They don’t know where I come from, my background. They really have no clue what I do in my own life. And it doesn’t bother me at all.”