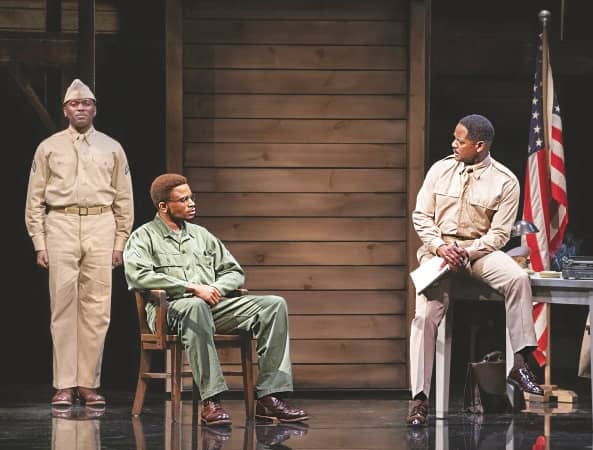 After four decades and one Pulitzer, A Soldier’s Play comes to Broadway.

CHARLES FULLER’S 1981 A Soldier’s Play, an investigative procedural as crisply executed as a military heel-turn, has premiered uptown at last. What took so long? When it first ran, it was one of the great success stories of the Off-Broadway Negro Ensemble Company and a star-making hit for actors like Samuel L. Jackson and Denzel Washington. When Fuller adopted it as a film (renamed A Soldier’s Story), he was nominated for an Oscar. The play itself won a Pulitzer. But Kenny Leon’s production for Roundabout Theatre Company is only now coming to Broadway.

Plays stay in the imagination only if they’re revived or taught. For years, A Soldier’s Play was caught between two stools: too conventional for the formalists (it has the rhythms of a Law & Order episode), too serious about internalized racism for the feel-good entertainment junkies. It’s also almost fetishistically male. The narrator hero is a military lawyer, Captain Davenport (Blair Underwood), who wears mirrored sunglasses and generally acts like a badass, hard-edged supercop. One-third of the available stage time involves Davenport slowly standing up from the edge of a desk and snapping a salute. The second act opens with his buttoning a shirt over a shining chest, a kind of worshipful moment for masculine perfection. I don’t know how audiences handled it in 1981, but when I saw it, a woman in front of me groaned out loud. That’s a hard quality to capture in a classroom.