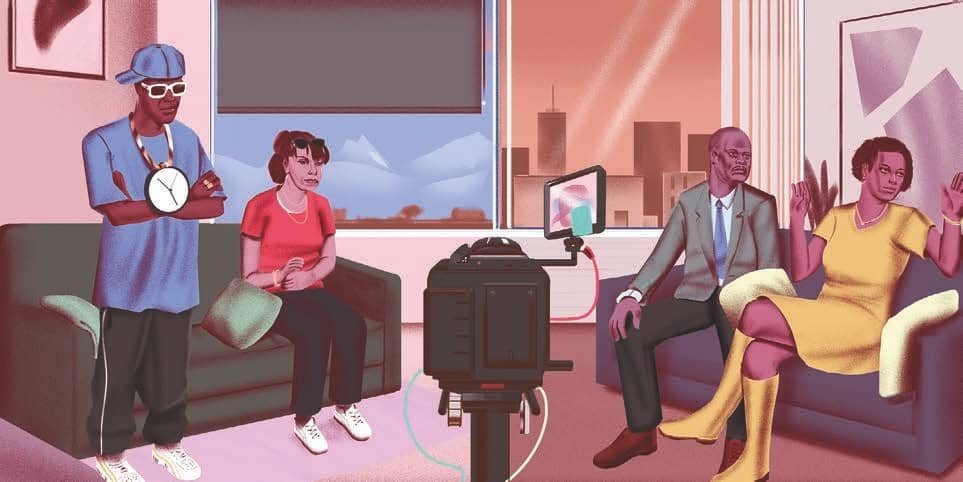 Docuseries are television’s latest prestige offering, but they’re not so different from their trashier predecessors.

THERE’S A SCENE IN HBO’s NXIVM-cult docuseries, The Vow, that turned my initial idle curiosity into absurd, all-consuming obsession. At the end of the first episode, a former cult member named Mark Vicente gets emotional in the middle of a talking-head interview as he describes how NXIVM destroyed the early, tender part of his marriage. “I feel like my life with Bonnie was stolen,” Vicente says. “Bonnie got there first.” He’s referring to her realization that the organization they had devoted their lives to was a cult. Then, without any warning, the show skips back in time to an earlier moment of rupture between the couple, when Bonnie laid out her concerns about NXIVM to Mark. “There’s a lot of things I’m starting to see about the organization,” she tells him, while Mark tries to talk her off the ledge: “C’mon, boo. C’mon, c’mon.” “I think some things are going to crumble,” Bonnie says.

I was so compelled I let my kids’ breakfast oatmeal congeal in the pot behind me while I watched. This, I realized, is the way producers on The Bachelor would have told this story. That sounds gross and bad! A thoughtful docuseries about human vulnerability and the search for meaning being reduced to the mega drama of a reality dating-competition show? That move, though—the talking head and the cut to the scene as it unfurled with no demarcation between them, followed by the punch of an episode ending—that’s a reality-TV classic, a bread-and-butter edit for a Real Housewives meltdown. In its documentary sensibility, The Vow is part of a vital, well-established school of fly-on-the-wall filmmaking. Its creators, Karim Amer and Jehane Noujaim, are award-winning directors. But in its TVness, in its cliffhanger delights, and in its sustained intimacy over time, The Vow is reality TV polished to a prestige shine, and the qualities it shares with the form are key to why it’s so delicious.

The Vow is just the latest to tap into the surge of popularity for the docuseries format, which was spurred by true-crime works like The Jinx and Making a Murderer (as well as the podcast Serial) and the cultural-history series O. J.: Made in America. In recent years, the form has flourished. In crime and thrillers, there’s Wild Wild Country, The Keepers, and Errol Morris’s Wormwood. In food docuseries, on Netflix alone, a proliferation: Chef ’s Table, Ugly Delicious, Salt Fat Acid Heat, Cooked, Street Food. In just 2020: the wildly popular sports series Cheer, the excellent medical docuseries Lenox Hill, the true-crime–cum– biography I’ll Be Gone in the Dark, Chef ’s Table: BBQ, and, inescapably, Tiger King.