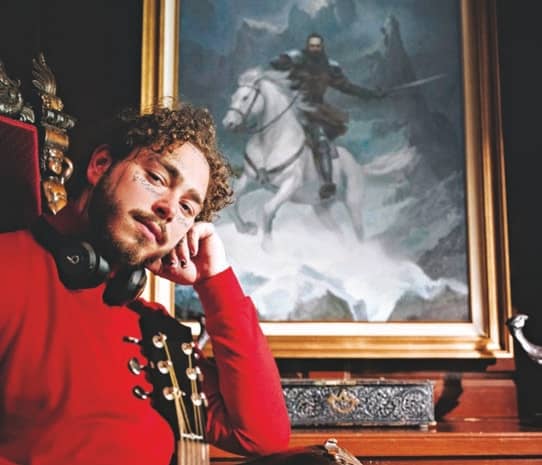 Every post malone album serves at least one 100-proof distillation of the New York–via–Texas star’s work, bolstering his odd standing as a singer-songwriter whose principle building blocks come from trap music but whose tastes suggest that his final destination lies somewhere farther afield. “Broken Whiskey Glass” opens 2016’s Stoney on a hangover and a lyric about the painful day after a reckless night out that’s closer in spirit to country drinking songs like “Sunday Morning Coming Down” than the pill-and-syrup anthems that count as its contemporaries. Last year, Beerbongs & Bentleys’ “Over Now” recruited Mötley Crüe’s Tommy Lee for a trip into the atmospheric sorta-rock typified of late by Imagine Dragons and Rag’n’Bone Man, as Post lashed out at people who doubt him, both in relationships and in the public eye. “Broken Whiskey Glass” and “Over Now” punch through party-rap tropes to peek at the motivations behind the drinking and drug use on the surface; it’s hard to reconcile the cynicism prevalent in Post Malone’s music with the general impression of him as a lighthearted stoner. He’s saying something about fame, but we’re not all listening.