Our Caesar - Can The Country Come Back From Trump? 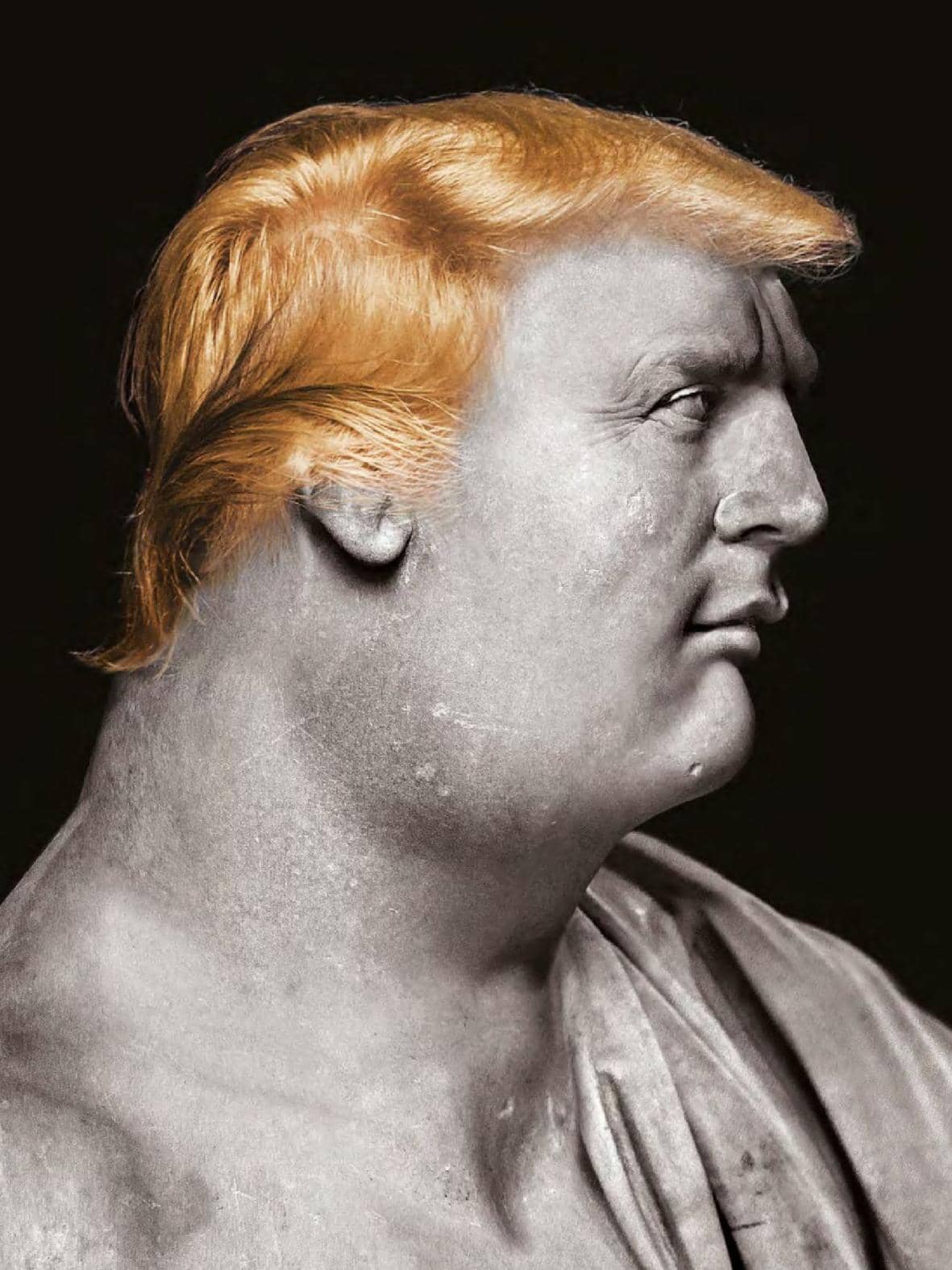 Four years after Donald Trump emerged as the most nakedly authoritarian candidate in American history, it’s tempting to view the threat he once seemed to pose as overblown. Upon his election, some panicked that he would be a proto-dictator, trampling every democratic institution in the fascist manner imported from Mussolini’s Italy and Hitler’s Germany. Others saw merely a malign, illiberal incompetent who would probably amount to nothing too threatening—or believed that America’s democratic institutions and strong Constitution would surely survive Trump’s strongman posturing, however menacing it appeared in the abstract. Many contended that his manifest criminality meant he would be dispatched in short order, with impeachment simply a matter of time.

It was all, unavoidably, unknown and unknowable—and so we cast around for historical analogies to guide us. Was this the 1930s, along the lines of Sinclair Lewis’s It Can’t Happen Here? Or the 19th century in Latin America, with Trump an old-school caudillo? Was he another demagogue like George Wallace or Huey Long—but in the White House?

Well, we now have a solid record of what Trump has said and done. And it fits few modern templates exactly. He is no Pinochet nor Hitler, no Nixon nor Clinton. His emergence as a cultish strongman in a constitutional democracy who believes he has Article 2 sanction to do “whatever I want”—as he boasted, just casually, last month—seems to have few precedents.

But zoom out a little more and one obvious and arguably apposite parallel exists: the Roman Republic, whose fate the Founding Fathers were extremely conscious of when they designed the U.S. Constitution. That tremendously successful republic began, like ours, by throwing off monarchy, and went on to last for the better part of 500 years. It practiced slavery as an integral and fast-growing part of its economy. It became embroiled in bitter and bloody civil wars, even as its territory kept expanding and its population took off. It won its own hot-and-cold war with its original nemesis, Carthage, bringing it into unexpected dominance over the entire Mediterranean as well as the whole Italian peninsula and Spain.

And the unprecedented wealth it acquired by essentially looting or taxing every city and territory it won and occupied soon created not just the first superpower but a superwealthy micro-elite—a one percent of its day—that used its money to control the political process and, over time, more to advance its own interests than the public good. As the republic grew and grew in size and population and wealth, these elites generated intense and increasing resentment and hatred from the lower orders, and two deeply hostile factions eventually emerged, largely on class lines, to be exploited by canny and charismatic opportunists. Well, you get the point.

Of course, in so many ways, ancient Rome is profoundly different from the modern U.S. It had no written constitution; it barely had a functioning state or a unified professional military insulated from politics. Many leaders were absent from Rome for long stretches of time as they waged military campaigns abroad. There was no established international order, no advanced technology, and only the barest of welfare safety nets.

But there is a reason the Founding Fathers thought it was worth deep study. They saw the destabilizing consequences of a slaveholding republic expanding its territory and becoming a vast, regional hegemon. And they were acutely aware of how, in its final century and a half, an astonishing republican success story unraveled into a profoundly polarized polity, increasingly beset by violence, shedding one established republican norm after another, its elites fighting among themselves in a zero-sum struggle for power. And they saw how the weakening of those norms and the inability to compromise and mounting inequalities slowly corroded republican institutions. And saw, too, with the benefit of hindsight, where that ultimately led: to strongman rule, a dictatorship.

So when, one wonders, will our Caesars finally arrive? Or has one already?

DRAWING PARALLELS BETWEEN Rome’s fate and America’s is not new, of course—from Gore Vidal’s trenchant critique of American imperialism in the Cold War, to Patrick Buchanan’s A Republic, Not an Empire in the late ’90s, to Cullen Murphy’s Are We Rome? in the aughts. But the emergence of Trump adds a darker twist to the tale of imperial overreach and republican decline: that the process is accelerating, and we may be nearing a point of no return.

The story of Rome is as unlikely as America’s. Its republic emerged from a period of rule of consecutive kings, elected for life, beginning around 750 BCE, or so later Roman historians claimed. That period lasted a couple of centuries before the last king, a despised figure called Tarquinius Superbus, was overthrown. From then on, from 509 BCE to 49 BCE, the rule of one man was anathema and the title rex a political kiss of death. A Senate and other assemblies replaced the monarch, and power was more widely distributed.

The new offices of state, including the most powerful, the consuls, were all held by at least two people, with strict term limits of one year—and with each officeholder given a mutual veto, to guard against any monarchical pretensions. The power awarded to the consuls and the Senate—representing the landed elite and, increasingly, the business class—was balanced against that of the tribunes (there were, at first, two), representing the masses, who had their own assembly with real clout. A new office of “dictator” was created—a break-glass-in-case-of-emergency assignment to one man to assume total power if civil unrest threatened the republic as a whole. But the dictator had a maximum of six months in office, after which he had to step down.

I’m crudely simplifying a complex and evolving set of arrangements, but the core idea was the dispersal and balancing of power, so that every segment of Roman society, apart from slaves, could have some input, even as the Senate effectively, if not definitively, called the shots. (It was a republic and emphatically not a modern democracy.) What kept this contraption together, without a written constitution, was something the Romans came to call the mos maiorum, the “way of the elders.” Tradition, in other words, or what we would call long-standing democratic norms—adherence to precedent, give-and-take in political negotiations, respect for proper procedures, a willingness to accept half-measures rather than imposing zero-sum solutions, and, above all, loyalty to the republic over one’s own ambition. Whenever someone seemed to push against these norms, they were demonized as a wannabe king.

The erosion of the mos maiorum took a very long time—longer than the entire history of the United States. And it began, in many ways, because of the republic’s success. As Mary Beard’s new classic, SPQR, vividly explores, Rome grew and grew, butting up against and clashing with regional neighbors, waging war, gaining (and sometimes losing) territory in fits and starts. But a political system designed for a relatively small city had to make some serious adjustments as its territory and prosperity and population exploded. The fact that Rome was in a semi-permanent war with its neighbors—a “forever war” if ever there was one—gave military commanders greater and greater clout, and the loot they hauled from Africa to Asia overwhelmingly enriched the elites beyond anything they had previously experienced.

These were decades and centuries of sudden growth in wealth and territory, but also tension. The forever war required small landowners to leave their farms untended for extended periods to fight. Romans saw many of these small estates fall into decay or ruin and begin to be bought up by wealthier landowners and consolidated into vast estates. Over time, as the population boomed and small agriculture waned, food resources became stretched. Before too long, there were too few small landowners to qualify for military service, and widening inequality began to generate increasing resentment among slaves and the poor. And into this fraught moment came the first real populists, the Gracchus brothers, who rose—from within the elites, as Trump and many others have in the millennia since—in the 130s BCE.

The first, Tiberius, elected as tribune of the plebs, proposed a set of land reforms to redistribute wealth. He knew he couldn’t get it past the Senate and so did not even try to, as had been the norm; instead, as Edward J. Watts details in his Mortal Republic, he went straight to the People’s Assembly. Then he tried to get his fellow tribune thrown out of office to avoid his veto, and ran for an unprecedented second term as tribune, at which point several senators, out of procedural tools, organized a small mob, grabbed whatever came to hand, entered the vote-counting arena, and clubbed Tiberius and 300 of his supporters to death.

This kind of violence seems unthinkable in America today, though it was not so unusual in the decades before the Civil War, when senators were repeatedly at each other’s literal throats on the Senate floor. But look past the violence and the situation seems a bit more familiar: deepening polarization, mutual mistrust, abandonment of norms, and trashing of precedents. Soon, it was possible to speak, very roughly, of two Romes: the rich Establishment and the rising masses, the optimates and the populares, waging a zero-sum war through Roman political institutions. In Cicero’s words: “The death of Tiberius Gracchus and even before that, the whole rationale behind his tribunate divided a united people into two distinct groups.” The Latin word for groups is partes.

Tiberius’s cause was taken up by his younger brother, Gaius, who ran for the tribunate, won, and proposed even more distribution of land, new colonies for landless citizens, a major investment in roads and infrastructure, the removal of some senators from juries, and a subsidized grain dole for any Roman in need. It was something for everyone but the elites—and hugely resonant among the populares. This time, the Senate responded more deftly by getting a rival and loyal tribune to outbid and undercut Gaius. In a contentious public assembly on the matter, scuffles broke out, a supporter of the optimates was stabbed with a writing stylus, and a riot was avoided only because of a sudden rainstorm. But the day after, the Senate, deeply rattled, gave authority to the consul to do, as Mike Duncan puts it in The Storm Before the Storm, his gripping account of these years, “whatever he thought necessary to preserve the state.” A bloodbath ensued, in which Gaius was slaughtered along with 3,000 of his followers, their corpses thrown into the Tiber.

In The Storm Before the Storm, Duncan quotes the great Roman historian Sallust, who, looking back, pulled a “both sides” argument— “The nobles began to abuse their position and the people their liberty.” The Greek historian Velleius Paterculus more astutely noted that “precedents do not stop where they begin, but, however narrow the path upon which they enter, they create for themselves a highway whereon they may wander with the utmost latitude.” A cycle of polarization had begun.

AS THE TURN OF THE FIRST century BCE approached and wars proliferated, with Roman control expanding west and east and south across the Mediterranean, the elites became ever wealthier and the cycle deepened.

Precedents fell: A brilliant military leader, Marius, emerged from outside the elite as consul, and his war victories and populist appeal were potent enough for him to hold an unprecedented seven consulships in a row, earning him the title “the third founder of Rome.” Like the Gracchi, his personal brand grew even as republican norms of self- effacement and public service attenuated. In a telling portent of the celebrity politics ahead, for the first time, a Roman coin carried the portrait of a living politician and commander-in-chief: Marius and his son in a chariot.