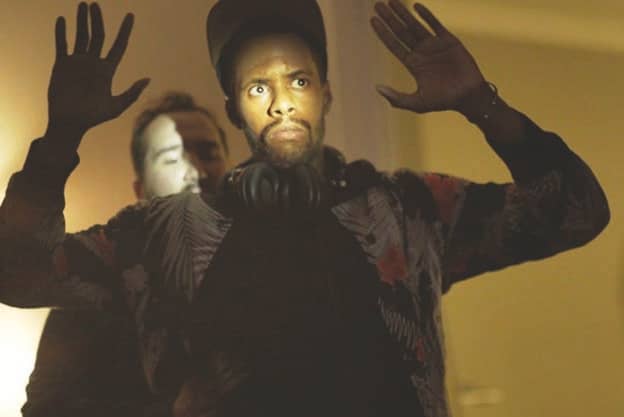 Black Lives Matter protests are moving from the streets to the executive suites. This is the story of trying to make my film hashtag—and why I abandoned it in the end.

I’VE BEEN PERFORMING live comedy since 2010. I’m a comedian, TV and film writer, Sundance Fellow, DJ, Mauritanian, and Muslim. I have a bachelor’s in behavioral neuroscience because I was interested in prejudice, how it manifested physiologically and psychologically in the brain, and keeping my African parents happy. Here’s one of the first jokes I ever wrote:

“I have a Black friend who had sex with a white woman and she started saying ‘yo’ and ‘dope.’ Yes, he sexually transmitted Ebonics to her. At first I was mad! I was going to hop online where, you know, where justice happens. Then, I was like, ‘You know what, what if it happened the other way around? What if I had sex with a white woman and could finally say, ‘Hello, officer’?”

I began to notice that when police brutality wasn’t in the news, that punch line was super hot fire for alabaster audiences. But when a Sandra Bland, Mike Brown, or Walter Scott was in the headlines, for white audiences, it was all “Hey bro, too soon.” We all live on a Race-Time Continuum: Black people perceive racism as barely decreasing over time, where white people dip in and out of traumatic events in the Black community in waves.

Back in 2016, following the deaths of Philando Castile and Alton Sterling in July, I decided I wanted to make a short film about the cyclical loop of racialized violence called hashtag. Along the way, in August, Korryn Gaines also was murdered by police. I set out to show white people the cycle I saw using a Groundhog’s Day format in the last moments of an unnamed Black character’s life. In the climax of hashtag, two police officers who have been tailing the main character (played by me) break into his house and shoot him dead. Then he comes back to life only to be in the same situation, and he has to learn from the past how to survive: Don’t move too fast, comply, answer questions calmly, be tone-policed while you’re scared shitless, rinse, repeat.

I made a trailer and set up a GoFundMe account to crowdfund the short. But parallel to all of this was the 2016 election, which, as we all know, fucked this country up for the next several years. As the soul of the country was being fought for in the voting booths, Castile, Sterling, and Gaines’s deaths faded from public consciousness. National attention refocused on red and blue waves of white feelings, not the impending recipients of the consequences of a Trump presidency: Black people and people of color. So hashtag stalled.