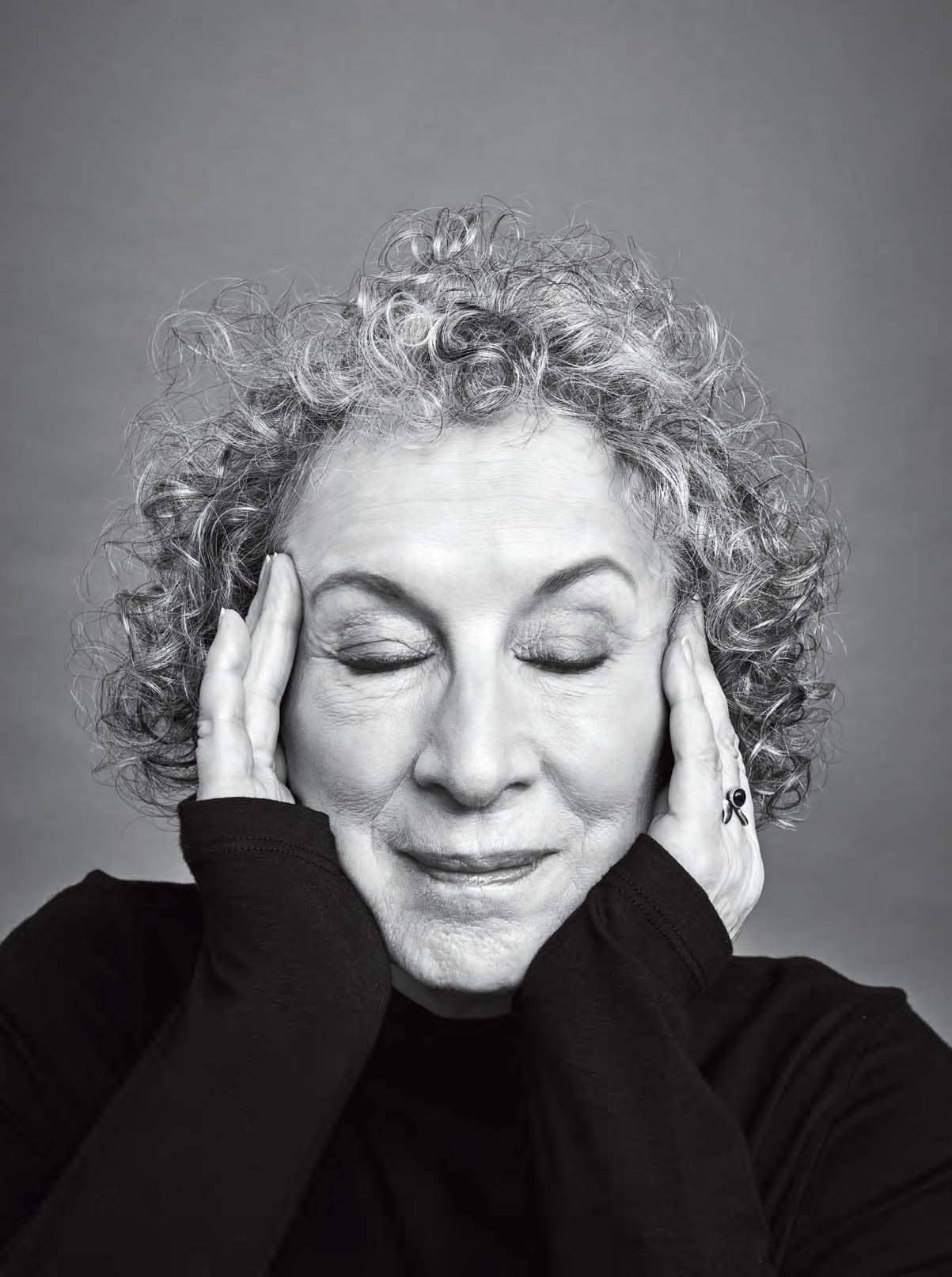 Lady Oracle is both the title of a Margaret Atwood novel (1976, very funny) and the author’s unofficial epithet. Crack open a news source today and you’ll find something that Atwood speculated about a decade or three ago in one of her novels: lab-grown meat, environmental catastrophe, state surveillance, the diminishment of reproductive autonomy, antimicrobial clothes. Atwood isn’t thrilled about her reputation as a cheerful eschatologist and has pointed out that it rests on a misunderstanding of dystopian fiction, which, she argues, isn’t a prediction of the future (dummies), it’s an interpretation of the present. In other words: If you’re not seeing what I’m seeing, you’re not paying attention. Just as she squirms away from the mantle of prophecy, Atwood rejects ideological labels, most institutional affiliations, and the idea that a writer is necessarily a moral agent. Some labels that do safely apply to her include poet, woodswoman (she grew up in rural northern Quebec), troublemaker, palm reader, student of history, inventor (look up LongPen), and—on a frigid Monday morning at a New York hotel with “weird 1970s décor,” in her words—wearer of earrings in the shape of mini-ducks.

What did you make of that?

My readers notice those things before I do. I expect that Kylie Jenner heard from some of them along the lines of “We appreciate the thought, but you kind of missed it.” There were some themed tequilas. People often do this in a very well-meaning way; they’re not trying to be unpleasant. It has been the occasion when I’ve been speaking somewhere and I will be greeted with Handmaid’s Tale cupcakes. Will I turn up my nose at such cupcakes? No, I will not. I will not do that.

Will you eat the cupcake?

That depends on my relationship with sugar at the moment. I have a collection of artifacts like that: I have Lego handmaids and commanders. I’ve got some knitted chickens from a pro-choice outfit in Texas. One’s called the Handmaid's Tale. I have a piece of embroidery done before the embroiderer had read The Testaments. 2 It says f*ck aunt Lydia. 3 As far as I’m concerned, that’s people playing in the sandbox. I’m happy to have people playing in the sandbox, although sometimes they get it a little off, but that is to be expected. There are people right now writing military histories of Gilead, and I look forward to reading them because I’m not going to do that.

The event of this decade that strikes me as most Gileadean is the Jeffrey Epstein 4 case. A powerful man with government connections inveigling women into a ring of sexual slavery. I can picture Commander Epstein in the pages of Handmaid.

Epstein is more of a ’90s story. Cold War ends in ’89, and then we’re told, “End of history, and the world is going to go shopping because global capitalism has triumphed.” I think Epstein is more of a Playboy type of story. Whereas Gilead is much more virtuous, puritanical leaders. They know what’s good for you, but you also have this other thing going on, which generally is the case with those kinds of setups.

I have to imagine that there were at least one or two commanders who didn’t subscribe to the lofty ideals.

Following 9/11, The Handmaid’s Tale began to be more generally accepted as augural and you as clairvoyant. Is that a rewarding kind of recognition?

Not particularly. 9/11, but also the 2008 financial meltdown. When people are scared and they think things are falling apart, they get more conservative, and they’re willing to trade civil liberties for somebody taking control. That’s usually how these people get in. What isn’t rewarding is to have been “right” about that. If I could trade having been right, I would.

Sort of an “I told you so” with a tear running down your face.

I don’t even go “I told you so,” because it’s not prophecy. It’s a what-if story. That’s what all those kinds of books are: Here’s a blueprint of a house. You have to see the blueprint before you move into the house. Is this the house you want to live in? Take a look around. Are there enough bathrooms? Do you like wallpaper? But you can change it. It’s still just a blueprint. There’s a very good book by Madeleine Albright called Fascism: A Warning. For her, “fascism” has a pretty broad definition. What she really means is totalitarianism. But she kind of lays it out on a plate. Here’s the warning signs … and here’s what they all do. The courses of action are detour signs: don’t go here. So what I say to people when they say, wringing their hands, “What can we do?” I say, “How about voting next time?” They guiltily applaud because they didn’t. They were too pure to vote. They didn’t like either of the candidates.