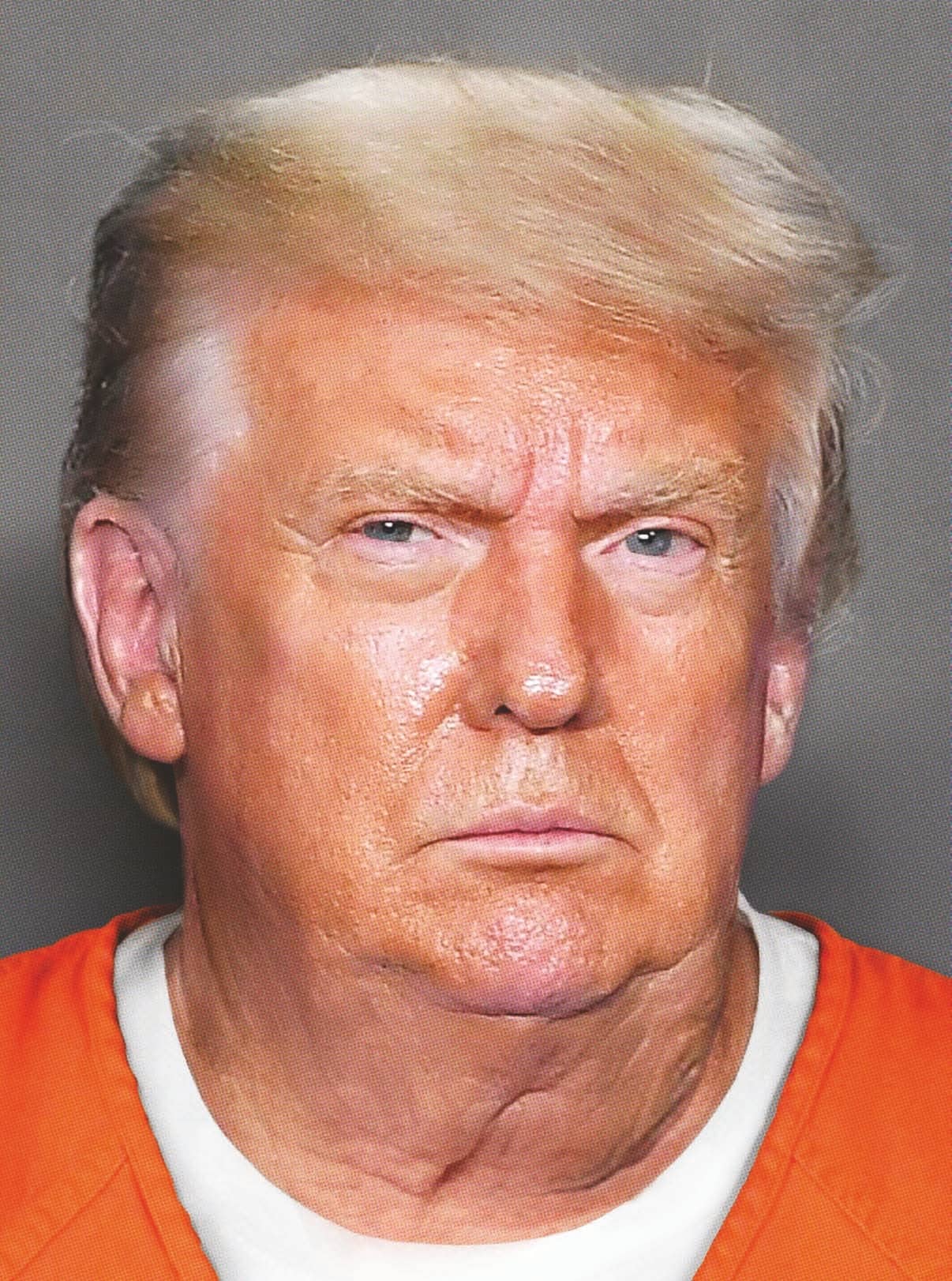 For the Republic to survive Trump’s presidency, he must be tried for his crimes. Even if that sparks a constitutional crisis of its own.

IN THE END, THE MOST SALIENT FACT about Donald Trump may simply be that he is a crook. He has been defying the law since at least the early 1970s, when he battled the Department of Justice over his flagrant refusal to allow Black tenants into his father’s buildings. He has surrounded himself with Mafiosi, money launderers, and assorted lowlifes. His former attorney, national security adviser, and adviser, and two of his campaign managers, have been arrested on or convicted of an array of federal crimes ranging from tax fraud to perjury to threatening witnesses. He employs the lingo of the underworld: People who cooperate with law enforcement are “flippers” and “rats”; investigators pursuing his misconduct are “dirty cops.” To him, the distinction between legal and illegal activity is merely an artificial construct enforced by sanctimonious hypocrites.

And although President Trump’s opponents have been warning Americans what will happen to their 230-year-old constitutional government if our gangster president gets another four years in office, the truth is much of the damage has already been done. An electoral defeat in November is, of course, necessary. But Trump has set off a profound crisis of democratic legitimacy that even a resounding Joe Biden victory may not completely resolve. It may not take a fully developed fascist movement to bring down the Republic. All that may be required is one well-placed criminal.

The prospect of an electorally defeated Trump, though glorious, would immediately set off a conflict between two fundamental democratic values: the rule of law and mutual toleration. The rule of law is a banal yet utterly foundational concept that the law is a set of rights and obligations, established in advance, that apply equally to everybody. It is an ideal rather than a lived reality. Black America, to take one obvious example, has never experienced equal treatment from institutions like the police and the courts. But this serves only to illustrate its essential value. The civil-rights movement has consisted in large part of fighting to extend the protection of the rule of law to Black people.

The experience of Black racial oppression shows that the absence of the rule of law is a pervasive, terrifying insecurity. A society without the rule of law is one in which the strong prey upon the weak. The small-scale version is a town where you need the local warlord or mafia boss to solve any problem or dispute; the nation-state version is Vladimir Putin’s Russia, where the mafia is the government and bribery is endemic.

Mutual toleration means that political opponents must accept the legitimacy and legality of their opponents. If elected leaders can send their opponents to prison and otherwise discredit them, then leaders are afraid to relinquish power lest they be imprisoned themselves. The criminalization of politics is a kind of toxin that breaks down the cooperation required to sustain a democracy. This, along with the misogyny, was what made Trump’s embrace of “Lock her up!” so terrifying in 2016. He was already using the threat of imprisoning opponents as a political-campaign tool.

If the government is run by lawbreakers, though, the state faces a dilemma: Either the principle of equal treatment under the law or the tradition of a peaceful transition of power will be sacrificed. It’s hard to imagine any outcome under which the rule of law survives Trump unscathed.

One of the most corrosive effects of Trumpism upon the political culture has been to detach the law from any behavioral definition and to attach it to political identity. As Trump likes to say, “The other side is where there are crimes.” He has trained his supporters to understand this statement as a syllogism: If Trump’s opponents are doing something, it’s a crime; if Trump and his allies are doing it, it isn’t. The chants, which applied enough pressure to force James Comey to announce a reinvestigation of Hillary Clinton in October 2016, simply to protect the FBI from being delegitimized by Republicans after an expected Clinton victory, showed how the field had been sown for Trump even before he took office.

It is because Trump views the law as a morally empty category, a weapon for the powerful to use against their enemies, that he has spent his presidency calling for the prosecution and/or imprisonment of a constantly growing list of adversaries: Joe Biden and Barack Obama (for “spying” and “treason”), House Intelligence Committee Chairman Adam Schiff (for paraphrasing Trump’s Ukraine phone call in a speech), John Kerry (for allegedly violating the Logan Act), John Bolton (for writing a tell-all book), Joe Scarborough (for the death of a former staffer), Nancy Pelosi (for tearing up his State of the Union Address), and social-media firms (for having too many liberals). Trump has alleged a variety of crimes against at least four former FBI officials and three Obama-era national-security officials.

Trump has eagerly seized upon the sporadic riots and looting that followed George Floyd’s murder, but no actual violence is required for him to equate his opposition in general with illegal subversion of the state. “You don’t hand matches to an arsonist, and you don’t give power to an angry, left-wing mob,” he said in 2018. “And that’s what the Democrats are becoming.” Just as the term fake news used to describe deliberately false stories written by pseudo-journalists but was repurposed by Trump as an insult for very real reporting about his administration, crimes has ceased to denote violations of written law and become instead a catchall description for any anti-Trump activity.

Even though it is staring us in the face every day—or perhaps for that reason—we have failed to grasp how profoundly Trump has undermined the rule of law and how irreversible the damage may be. His contempt for the law is not merely incidental. He never put himself forward as a straight arrow. As a first-time major-party candidate, he depicted his history of dealing with politicians as a sequence of successful bribes. He spent years railing against the Foreign Corrupt Practices Act, a law banning bribes of foreign officials, and tried to weaken its enforcement as president, reportedly complaining, “It’s just so unfair that American companies aren’t allowed to pay bribes to get business overseas.” When he sought to collect a portion of the fee for brokering the sale of TikTok, Trump cited the long-standing practice of tenants paying off landlords to get rent-controlled apartments: “It’s a little bit like the landlord-tenant. Without a lease, the tenant has nothing. So they pay what’s called key money, or they pay something.” His vision of the good society is one in which powerful businessmen grease palms to get things done.

Two years ago, the New York Times, using documents supplied by his niece, Mary Trump, proved that the president had engaged in widespread fraud involving a fake company and falsifying financial information to steal millions of dollars. Also that year, the federal government said he had ordered a felony by directing hush money to his former mistresses during his campaign. His business paid millions for defrauding enrollees in a fake university. And he admitted using the Trump Foundation, supposedly a charity, to funnel money to his campaign and business.

That Trump made it to 2017 without being personally convicted of a crime is itself a testament to the ineffectiveness of white-collar-criminal-law enforcement. That Trump has not been charged since taking office is owed to the privileges of being president of the United States. Because the Justice Department has a policy against charging the president with crimes, it did not indict him for the same crime Cohen went to jail for—even though Trump had ordered Cohen to commit it. The same protection held back Robert Mueller from officially describing the many actions Trump had taken to obstruct the FBI’s investigation as “obstruction of justice.” And his standing as president has allowed him to keep his tax returns out of the hands of New York prosecutors.

But at some point, the impunity will end. The law is coming.

At the moment, Trump is reportedly the subject of three investigations. Manhattan district attorney Cyrus Vance Jr., New York State attorney general Letitia James, and Southern District of New York acting U.S. Attorney Audrey Strauss are all probing reported crimes by the Trump administration, ranging from tax fraud to embezzling funds at his suspiciously expensive inauguration, a large proportion of which was spent at his own properties. (Strauss took over after William Barr clumsily attempted to remove her boss, who had clashed with Barr over his investigations into Trump’s misconduct, but is reputed to be independent.)

At some point, the impunity will end. The law is coming.

Even beyond these ongoing probes, the potential for criminal liability is vast. Trump was impeached for leveraging support from Ukraine for an announcement of an investigation of Joe Biden. But the plot reportedly involved Rudy Giuliani and his clients hitting up Ukrainians for business deals, even as Giuliani was representing Trump’s agenda—which is to say, they were apparently seeking a personal payoff in addition to a political one. The Washington Post has pried loose from the Secret Service just a portion of the records of its spending at Trump properties, giving evidence of, at minimum, severe conflicts of interest.

Trump has fired and intimidated the inspectors general who monitor the executive branch for misconduct and has virtually halted all cooperation with congressional oversight. It stands to reason that turning over more rocks will reveal even more crimes. Upholding the rule of law is going to lead straight to the kind of grisly spectacle Americans associate with banana republics: the former president leaving office and going on trial.

“Usually, these kleptocracies are the ones that hang on to power most bitterly,” says Daniel Ziblatt, a professor of government at Harvard and the co-author of How Democracies Die. Trump is particularly dependent on his incumbency. His various legal appeals to keep his financial information from prosecutors have relied on his status as president, and he has used campaign funds to finance his legal defenses. Most important, he has bluntly wielded his power either to pardon his allies or to get the Justice Department to withdraw its charges as a signal of the benefit of remaining loyal.

The political climate will not easily permit a peaceful, straightforward prosecution. The maniacal Republican response to the past two Democratic administrations shows that the prospect of any real Republican cooperation is a fantasy. The fever is not going to break. So what is a post-Trump administration to do?