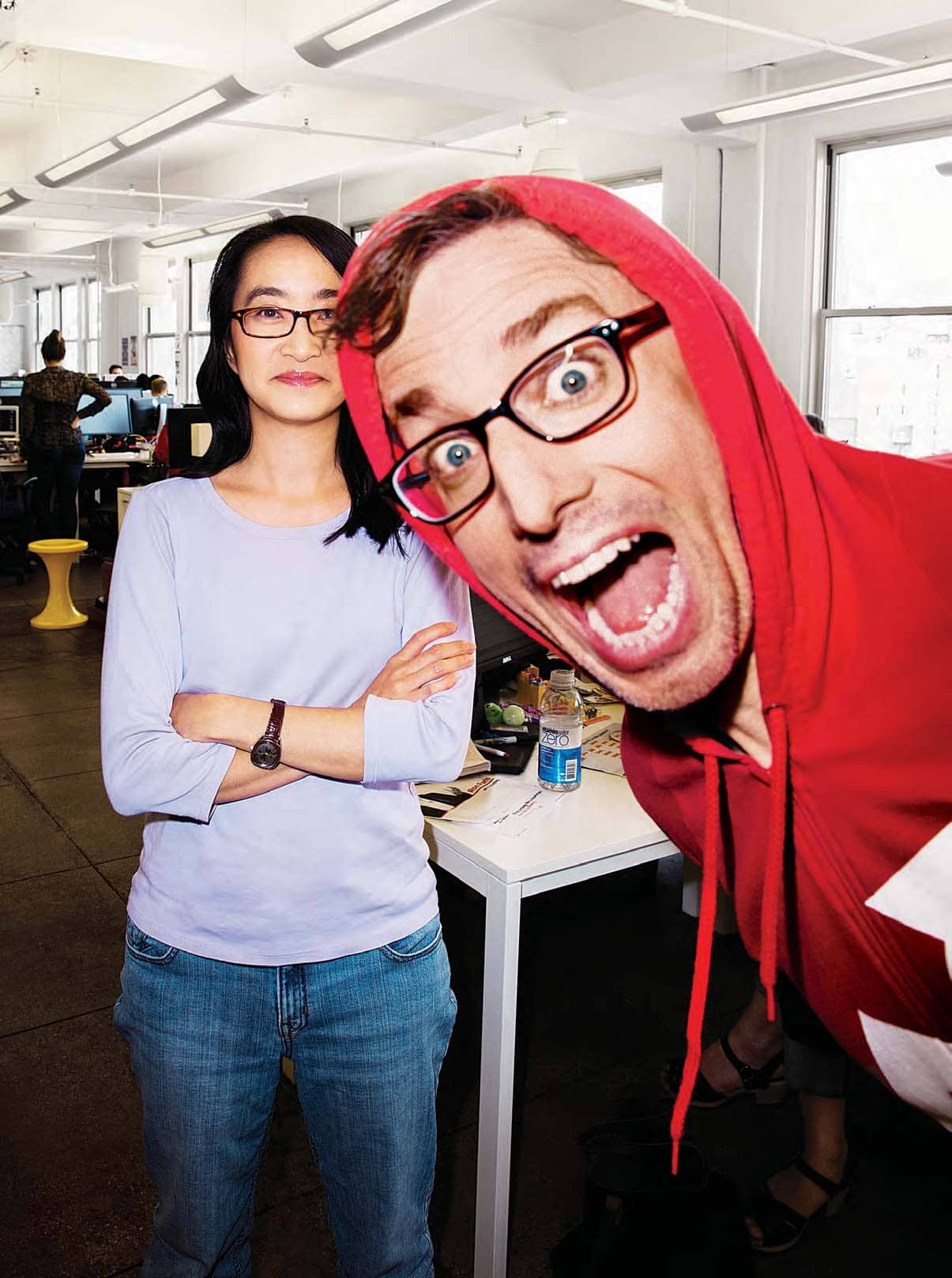 BuzzFeed made the world a meme.

“I heard WeGrow, the preschool, is being shut down,” Jonah Peretti says, sitting in a conference room in BuzzFeed’s New York offices. “How do you explain that to your 4-year-old?” He affects a gently parental tone: “‘There’s this guy Adam Neumann, and he’s very charismatic …’”

Like Neumann, Peretti, the founder of BuzzFeed, took money from the Japanese investment giant Soft- Bank—not the company’s Saudi-backed Vision Fund, he’s careful to clarify—early in his start-up’s life. Unlike WeWork, though, BuzzFeed has managed to keep its head above water for 13 years in an industry with much worse prospects than those of real estate. Since its founding in 2006 and especially since the creation of its news division in 2012, BuzzFeed has led the transformation of a media industry threatened by tech mega-platforms, private-equity vultures, fickle readers, and declining ad sales. It has pioneered new formats and business models, all while breaking major national stories like the infamous Steele dossier. (Even the New York Times has taken notice: Its 2014 “Innovation Report” looked to BuzzFeed as a model of web-publishing excellence. Dean Baquet, the Times’ executive editor, has remarked on its substantial journalistic impact.) But it’ll probably always be known for the memes. “The audience still isn’t bored of quizzes,” Peretti says.

When did you first see “the dress”? 1

I was out in a restaurant, and I was trying to be polite and not look at my phone and hanging out with my friends. And my phone was vibrating, and people were like, “Oh my God.” The restaurant I was in, literally all the waiters were looking at it. People were passing it around.

How long did that last?

The next morning, we just ran into a stranger. They were like, “Oh, that was so yesterday.” But the dress was a kind of perfect thing to catch fire at that moment. The internet was less polarized and politicized, and it had shifted to mobile fully so people were looking at mobile devices. With the dress, if you saw it on your phone and you were with people, you could hold the phone up and say, “What color is this?” Plus, in the early days of BuzzFeed, our traffic would die in the evening because people would watch television or go out with their friends. Now, with mobile, we see prime time for our content as the same as prime time for television. People are sharing and looking at content later.

Have the conditions changed such that something like the dress couldn’t happen again?

I think it’s harder. One reason is I think it made Facebook a little uncomfortable. The algorithm was like, “This is the piece of content everyone in the world should see.” I think that scared Facebook a little bit, that there could be a publisher that promotes a piece of content that then its algorithm feels like it needs to show to everyone in the world. Today, there’s a fear of viral content— you see this in China to an even greater extent. The Chinese government is very afraid of things that go viral because it’s something that they can’t control. And I think even in the U.S. now, there’s more of a moment of trying to control the internet. Ironically, that has led to much more microtargeting, where instead of having one thing that everyone in the world sees, we have personalized content for each individual, and keep people more in their lanes and in their bubbles, and not have as much entertainment that cuts across the entire social network or the entire web. In the long run, I think that’s led to things like more separatist movements around the world, more polarization.

How has media coverage of politics changed since 2008, when you made your mark as one of the founders of the Huffington Post?

At Huffington Post, it was less about scoops and journalism. We were more of an aggregator, and we noticed at the time that Digg was a big source of traffic. During the primaries, when Obama and Hillary Clinton were competing, one of the things that was kind of shocking to me was how the Digg community was having this huge impact. When there was a story that was pro-Obama, it would quickly get voted at the top of Digg, because Digg’s community liked Obama. And when there was a story that was pro-Hillary or that talked about Hillary in a positive light, it would get down-voted and buried and never make it to the front of Digg. Some media outlets realized that and we're starting to write content for Digg—“Oh, Obama was amazing,” and then, boom, 40,000 views to your posts. That, to me, felt like an early-warning sign of how media was changing, that a community and an algorithm combined to make it so that Hillary couldn’t win the primary and Obama could. I think that dynamic was partly why Obama was able to win and then ultimately become president.