It's Greta's World - But It's Still Burning 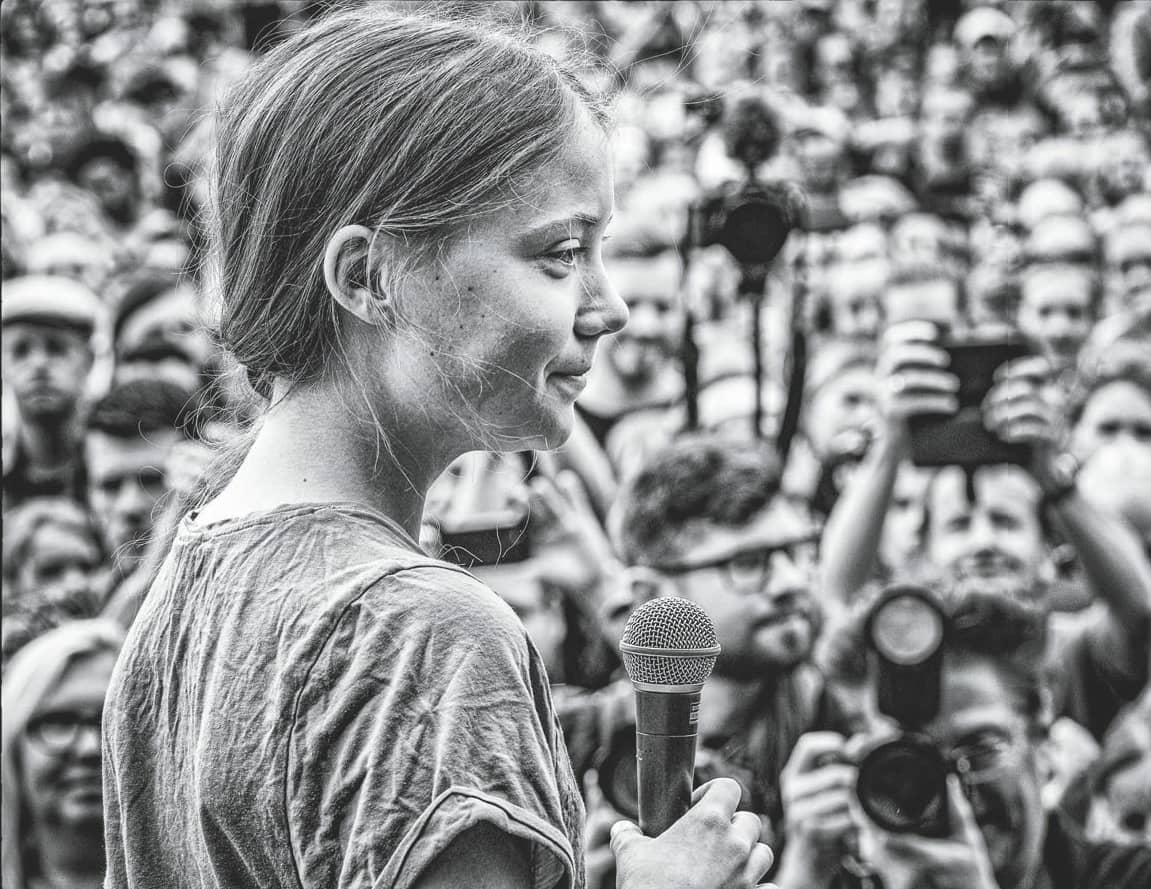 The extraordinary rise of a 16-year old, and her Hail Mary climate movement.

WHEN GRETA THUNBERG STEPPED ONBOARD THE MALIZIA II—a 60-foot racing yacht owned by the royal family of Monaco—it had been less than a year since she first walked out of school as an unknown, awkward, nearly friendless 15-year-old making a lonely protest outside the Swedish Parliament against her country’s absolute indifference to the climate crisis, which she saw in uncannily black-and-white terms. She painted her now-iconic sign in those colors, which she carried across the Atlantic on the two-week carbon-free journey she documented periodically on social media. Black capital letters on white: skolstrejk för klimatet (or “School Strike for Climate”).

By the time she stepped off the yacht in New York on August 28, two weeks after she’d set sail from Plymouth, England, wobbly-legged from the weeks at sea as she walked to address a crowd of many hundreds, she had become something even more unusual than an adolescent protester or even a generational icon. She was the Joan of Arc of climate change, commanding a global army of teenage activists numbering in the millions and waging a rhetorical war against her elders through the unapologetic use of generational shame. 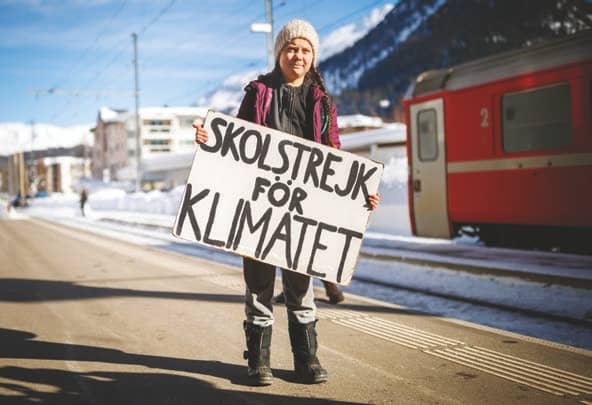 The comparison might seem hyperbolic and may come to look even more strained than that, depending on what the future brings for Greta and for climate action. But for the moment, there is simply no other appropriate analogy from political history to draw on in describing just how much she has achieved at such a young age and in so little time. (Even Malala

Yousafzai, now a student at Oxford, was celebrated more in newsmagazines and on conference stages than in the streets.) In a way that is perhaps possible only in the social-media age, Greta has become almost a synecdoche for the global climate movement: its mascot, its theorist, its revolutionary, and a representative “victim” of generational malice. A well-off white girl, she has even been called out by fellow activists for embodying the movement’s blind spots and shortcomings—though she has been conscientious, in ascending the world stage, to praise the work of all the other teens striking from school now each Friday.

Within four months of beginning her strike, Greta had spoken at the U.N.’s climate-change conference in Katowice, Poland, excoriating the crowd for its nihilistic self-interest:

You only speak of green eternal economic growth because you are too scared of being unpopular. You only talk about moving forward with the same bad ideas that got us into this mess, even when the only sensible thing to do is pull the emergency brake. You are not mature enough to tell it like it is. Even that burden you leave to us children. But I don’t care about being popular. I care about climate justice and the living planet. Our civilization is being sacrificed for the opportunity of a very small number of people to continue making enormous amounts of money.

The language was hot, relatively speaking, but Greta has Asperger’s, and her delivery was cool, flat, almost blank in its affect—somehow flatter even when performed aloud before an audience than when read on the page.

The year 2078, I will celebrate my 75th birthday. If I have children, maybe they will spend that day with me. Maybe they will ask me about you. Maybe they will ask why you didn’t do anything while there still was time to act. You say you love your children above all else, and yet you are stealing their future in front of their very eyes.

In March, an estimated 1.4 million schoolchildren did just that, following Greta’s lead, walking out of classrooms and marching in cities and towns around the world: 300,000 students in Germany, 200,000 in Italy, 150,000 in Quebec. There were strikes in Delhi, Seoul, and Cape Town; London and San Francisco and Washington, D.C.; Melbourne and Brussels, Lisbon and Taipei, and Quezon City in the Philippines, and Kenya and Namibia and Ghana; Edinburgh and Dublin and Sydney and Prague; Paris and Reykjavík and Tokyo. Greta stayed home, leading the strike in Stockholm. She had only just turned 16.

But the strikes themselves are only part of what Greta has achieved. In February, the president of the European Commission committed to spending fully a quarter of the E.U. budget on climate mitigation over seven years, following a meeting with her. And shortly after she visited the British Parliament, its Conservative majority voted to declare a climate emergency, then promised it would zero out on its carbon emissions by 2050 (and this amid the long, consuming drama of Brexit). 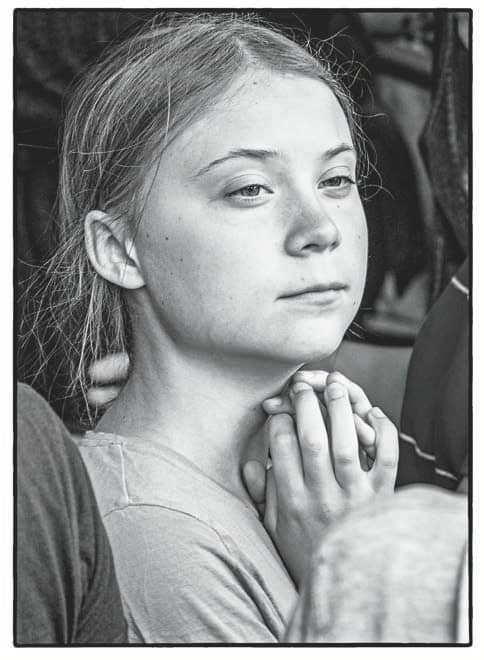 These were just pledges and may soon prove illusory, like every other pledge that has ever been made to fight climate change. But all are far more ambitious than would have seemed even conceivable a year ago. After all, when Greta began her school strike, late in August 2018, the U.N.’s Intergovernmental Panel on Climate Change had not yet released its “doomsday” SR15 report, which would arrive that October festooned with alarm bells and produce a sea change in public concern; the British protest movement Extinction Rebellion had not yet launched, which it would in November, blockading five bridges across the Thames and effectively stopping traffic in parts of London; hardly any American had heard of the Sunrise movement, which would make itself known when it occupied Dianne Feinstein’s Senate office in February 2019 and later forced two single-issue climate town halls onto the Democratic primary calendar; Alexandria Ocasio-Cortez had not yet been elected to Congress or introduced the crusade toward a Green New Deal. It has been a dizzying year for climate mobilization, in other words, and improbably but inarguably, Greta Thunberg has become its face.

THE ANNOUNCEMENT OF the boat trip itself occasioned a huge flurry of media attention on both sides of the Atlantic. In the photos she shared on Twitter and Instagram along the way, Greta looked not entirely comfortable at sea. In New York, where she disembarked from the boat at Brookfield Place’s glitzy North Cove Marina, she took the stage wearing blister revealing Crocs and a two-piece, water-resistant matte-black sailing outfit, printed on the back like an athletic jersey with her name (greta), as though anyone onboard or off would need help identifying her. On the front, a nameplate read g. thunberg, as it would on a military uniform. The crowd that welcomed her was made up of television and print media, activists pumping in the air signs like there is no planet b, and proud parents and teenage climate strikers she’d inspired, singing in rounds, to the tune of “Frère Jacques,” “Welcome, Greta, welcome, Greta / To New York.”

Greta hung back nervously as she was introduced by two local climate strikers: Alexandria Villaseñor, a 14-year-old who moved to New York from California last fall for a single school year while her mother pursued a master’s degree at Columbia and quickly started striking weekly in front of the U.N., inspired by Greta’s December call to action, and Xiye Bastida-Patrick, a 17-year-old from Mexico who moved to the U.S. because of her parents’ work on climate change and whose phone bore the sticker greta has a posse. Onstage, both towered over Greta, each more charismatic and typically adolescent in their affect than the headliner— a little more demonstrative, burning with considerably more performative righteousness as they addressed the crowd. “All of this is very overwhelming,” Greta said when she finally took the microphone. Losing her train of thought, she apologized: “My brain isn’t working correctly.”

Greta has delivered 12 speeches in her short but very public life, now packaged together in a Penguin paperback called No One Is Too Small to Make a Difference. But they have all been relatively quick, her interviews often briefer, and while she is regularly enveloped by supporters during climate strikes, she seems generally uncomfortable in crowds. “Greta’s in the middle there, looking miserable,” a reporter whispered to me, a few days later, when she joined Villaseñor’s weekly climate strike at the U.N.

Her natural medium—as it is for many celebrities roughly of her generation—is the controlled stage of social media. There, she has called her atypicality a “superpower” and has been quite open and unguarded about the details: As a young child, she says, she was diagnosed not only with Asperger’s but obsessive-compulsive disorder and what’s called “selective mutism.” Beginning at age 11, seized by a deep depression about the fate of the world, she stopped talking and eating. That has led, she says, to the stunted growth that today gives her the appearance of a preteen, a wise-beyond-her years golden child.

This atypicality has not proved, as you might have expected, a challenge in her public life. In fact, the plot points of Greta’s rise could have been lifted from Joseph Campbell: an Everygirl turned reluctant crusader, a dark night of the soul, a forbidding and intrepid journey from the imperial periphery to the very center of global power. The saga was irresistible. And as was the case for the Parkland students who originally inspired her strike with their protests against gun violence in the U.S., Greta serves as a wish-fulfilment fantasy for members of an older generation, the one she so pointedly and repeatedly calls out, who seem desperate to believe in a next-generation savior—and who seemed gratified to be flagellated a little bit for their selfishness and shortsightedness.