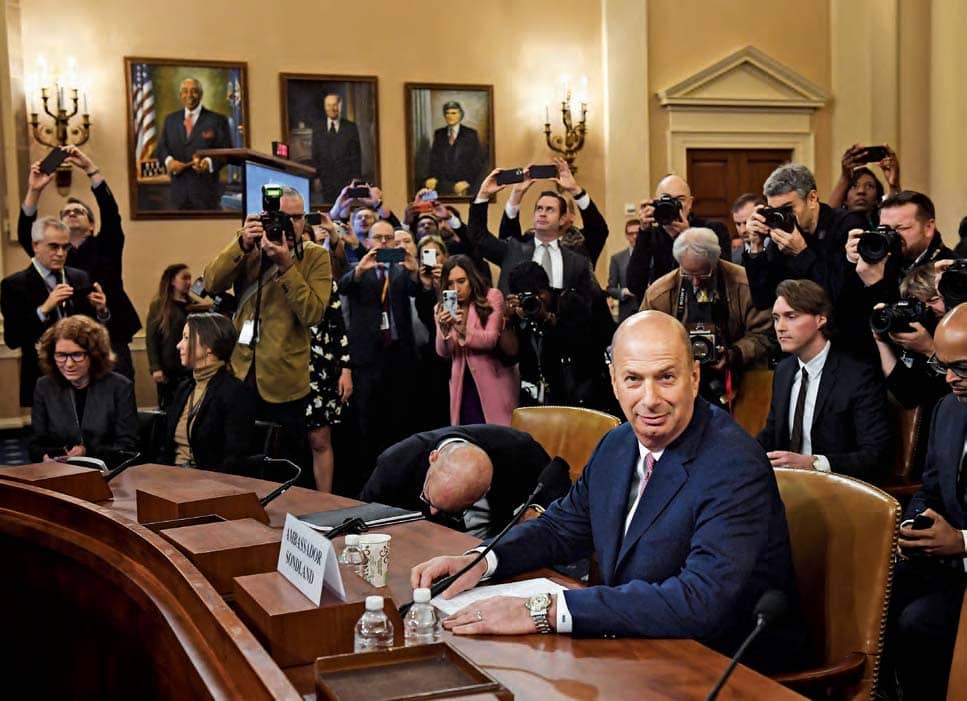 Gordon Sondland is an equal-opportunity flunky.

When Gordon Sondland testified at the House impeachment hearings on November 20, having “refreshed” his memory and recalled several incriminating facts that had escaped him the first time around, the ambassador was at pains to explain that he had never supported the scheme in which he had participated.

“We all understood that if we refused to work with Mr. Giuliani, we would lose an important opportunity to cement relations between the United States and Ukraine. So we followed the president’s orders,” he said. “At all times, I was acting in good faith … We had no desire to set any conditions on the Ukrainians. Indeed, my own personal view—which I shared repeatedly with others—was that the White House [meeting] and security assistance should have proceeded without preconditions of any kind. We were working to overcome the problems, given the facts as they existed.”

Sondland’s definition of “acting on good faith” meant following orders, even orders he found morally troubling. Here, he was articulating an ethos that has played an outsize role in the Trump era: that of the functionary who approves of neither Trump’s goals nor his methods but accommodates them in the name of staving off chaos. This type’s sole objective is to “land the plane,” to use a metaphor employed by former deputy attorney general Rod Rosenstein, perhaps the purest emblem of the bureaucratic tribe. (Pleading with Trump last year to let him oversee the Mueller investigation to its end, Rosenstein promised, “I give the investigation credibility. I can land the plane.”)

Plane landers tend to have conventionally conservative beliefs. Sondland is typical. Initially, he supported presumptive front-runner Jeb Bush in the primary, and, during the general election when Trump appeared doomed, he registered his opposition to Trump’s attack on the Gold Star parents Khizr and Ghazala Khan by refusing to take part in a fund-raiser. Trump’s victory seemed to alleviate Sondland’s ethical objections, though. He donated $1 million to Trump’s inaugural committee and in return secured an ambassadorship to the E.U. While Ukraine lay outside his formal portfolio, his pliability made him an ideal vessel for Trump.