Fears Of A Clown 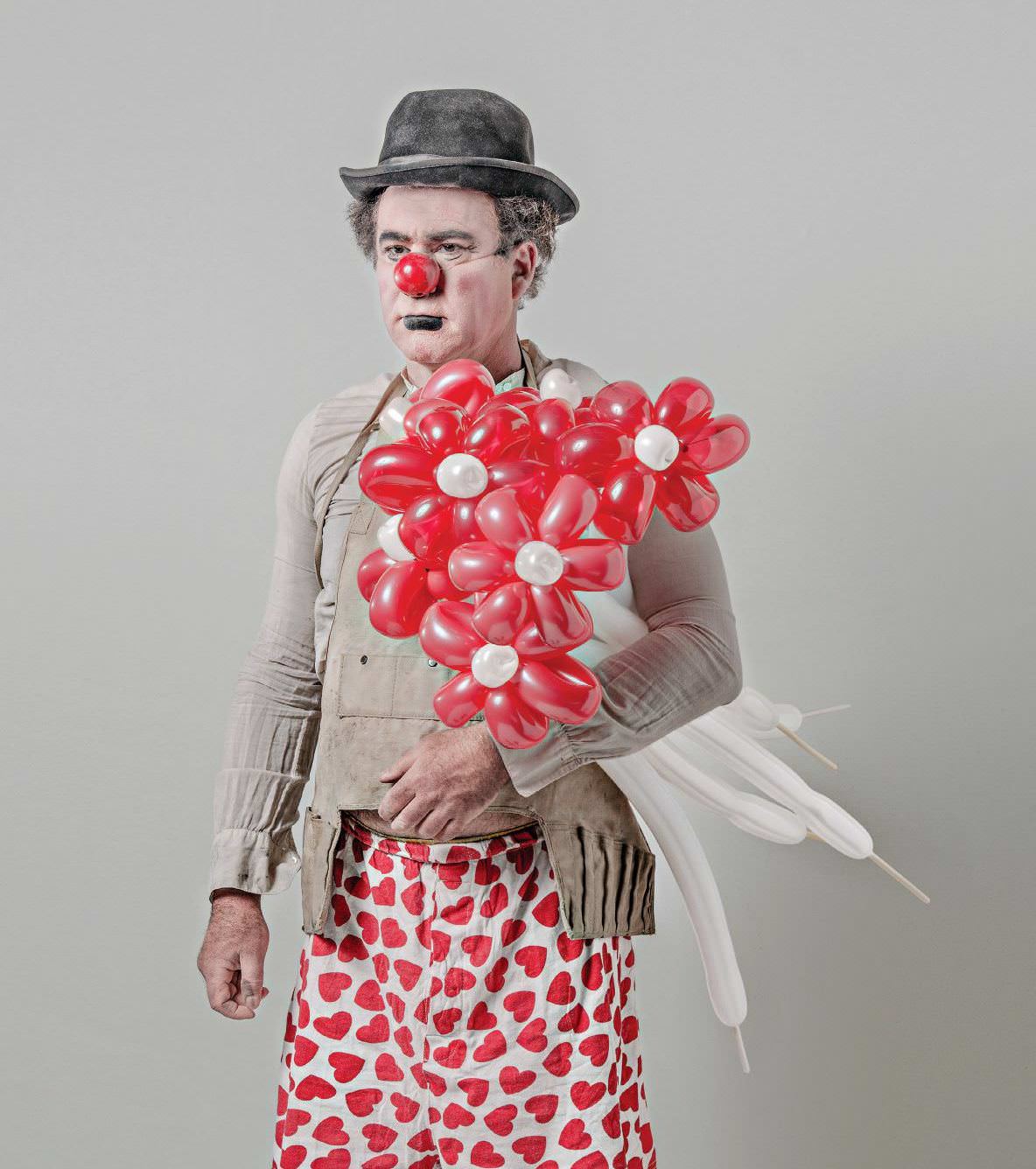 No one is better at making children laugh than Boswick the clown. He doesn't understand why adults are so scared of him. 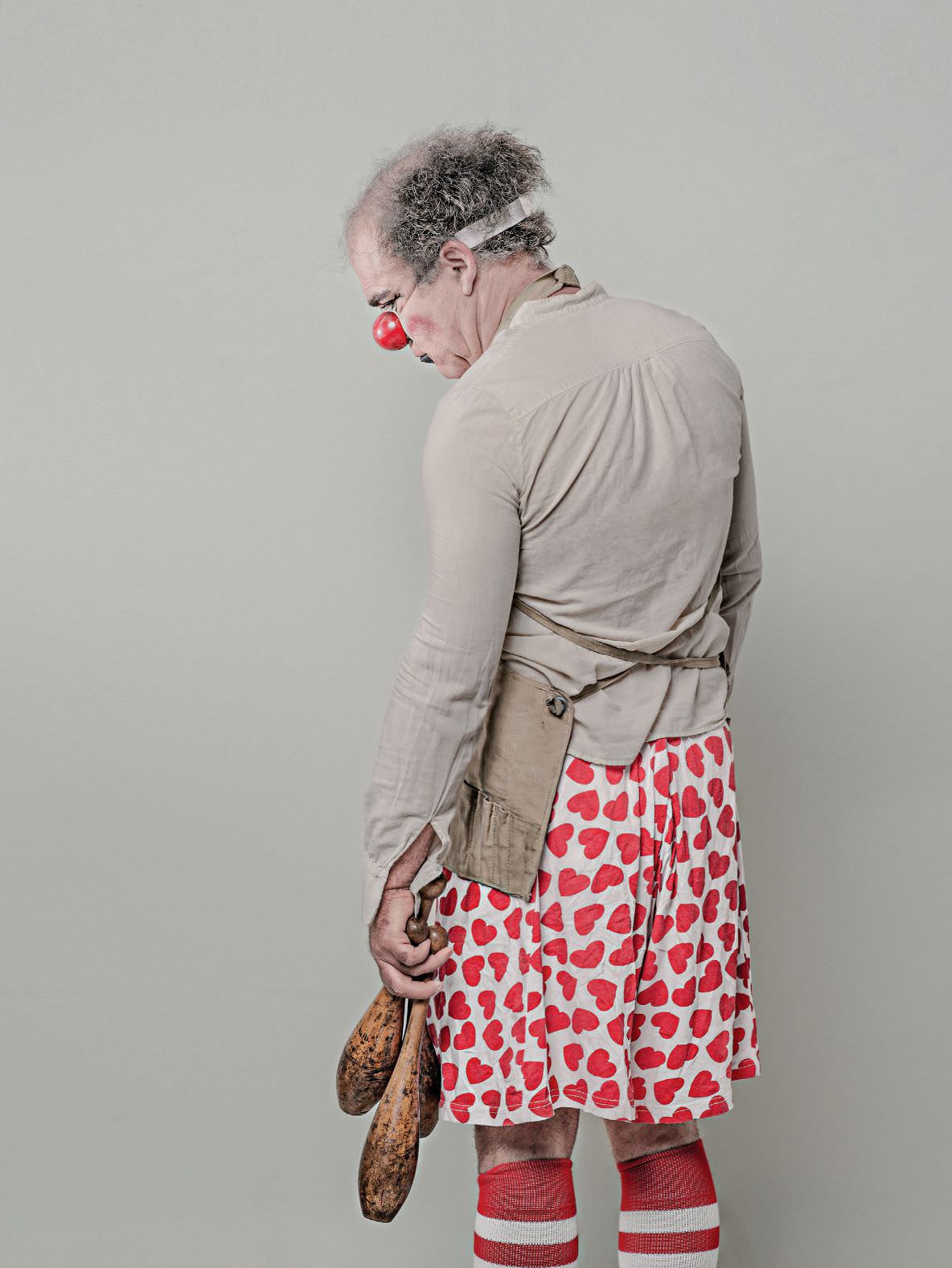 Among the indignities the clown routinely endures, the theft of his Ralph Wiggum antenna topper barely registered. Until a few weeks earlier, a foam miniature of the imbecilic Simpsons character, mid-nose-pick, had crowned the antenna of the clown’s Toyota Yaris. Then some joker had taken it, and now the car, though small and red and still hinting at foolishness, was missing the finial touch that nudged it into clown-car territory.

Not that there was any mistaking its owner’s occupation, as he stood behind the Yaris in a parking lot in Vallejo, north of San Francisco, on a mild evening not long ago. He wore a black top hat encircled by a purple ribbon, and a spritz of graying hair frizzed from under the brim. His nose was a red sphere, his face had an ocher tint, his cheeks were rouged, his eyelashes mascaraed, his lower lip underscored with black greasepaint. The sleeves of a polka-dot shirt ballooned out of a mauve vest, and suspenders kept a pair of baggy turquoise pants from puddling around the clown’s enormous, bulbously toed shoes, which had been cobbled from alternating patches of black and white leather. If you looked closely, as he popped the hatch to retrieve a bubble-gum-pink suitcase filled with props, you could see that his right index finger was torqued leftward from tying tens of thousands of balloon animals.

It is an occupational injury but a wound of honor, too. Anyone can throw on makeup and bill himself as a clown, but few are willing to go through what it takes to truly become one and bear the costs of that commitment. These include the kinds of reactions he has to deal with, like right then in the parking lot.

Two couples in their 20s were walking past, giggling, and one of the men was speaking.

The man gestured toward the woman he had his arm around and said, “She’d like a hug.”

The woman shrieked, recoiling, as her boyfriend tried pulling her toward the clown. “

‘Oh, I hate clowns,’ ” the clown said in a falsetto pantomime, waving his hands above his head in mock panic. “ ‘Ahhhhr, they’re scary! Ahhhhr!’ … How do you think I feel when I look in the mirror?”

The couples laughed, and the clown did, too, but he didn’t really think it was funny. The whole scary-clown thing had gotten out of hand. Clowns now live in a world where everyone seems to hate them, or profess to do so. One of the remarks the clown hears most often, while driving, is someone in another car yelling—the words are always the same—“Fuckin’ clown!” It surprises and dismays him every time.

one day earlier, Boswick, as the clown is known, stood in his office a floor below his apartment in the Inner Sunset neighborhood, on the south side of Golden Gate Park. He wore jeans and running shoes and an unbuttoned plaid shirt over a black T-shirt. Small patches of floor were visible amid a clutter of costumes and props and other clown detritus, which included an orange TV set; a pink chest of drawers; jester shoes with bells; a shelf full of Mad-magazine books; letters from publishers rejecting Boswick’s proposed Kid’s Guide to Snotty Comebacks; three whoopee cushions (he was running low); a photo of Boswick with an elephant at the Circus Circus casino in Las Vegas; a unicycle he’d forgotten how to ride; an old pair of clown shoes made by someone no longer alive; and a fish-shaped bag full of balloons in 17 colors, including lilac and periwinkle. “I get really anal,” Boswick said. “I want to have a lot of colors.”

There is still nothing Boswick would rather be doing, 27 years after he became a professional clown. Back then, clowning had seemed just the thing for a child of divorce who remembered “watching my parents argue when I was 4 and getting their attention by doing something weird and funny,” who had gymnastic ability and thought it was a hoot to deliver a well-executed pratfall, who liked to juggle and had awoken one morning in college with the name Boswick on his tongue and finger-painted it across his dorm-room wall. Later, when he was accepted at both the Dell’Arte physical-theater school and the Ringling Bros. and Barnum & Bailey Clown College, he chose Ringling largely because of the joy he felt when he opened its acceptance letter and confetti spilled out. In those days, clowns, far from being the butt of jokes, were still touchstones of American childhood. Adults cherished youthful memories of Red Skelton and Bozo. Clowns featured prominently in the launch of a new circus, Cirque du Soleil. The craft of clowning could be deemed worthy of a MacArthur grant.

Boswick approached what he did with an artist’s sincerity. During a six-month tour of Japan with Ringling’s The Living Unicorn show (featuring a hybrid Angora goat named Lancelot who had a solitary horn projecting from his head), he’d thrived on the energy of the big top. If Boswick experienced any negativity, it came from colleagues. Once, as he was practicing juggling while standing on a friend’s shoulders, another clown had walked past and said, “Save it for the ring.” “There was a very jaded quality, like, ‘I’m going home to get drunk,’ ” he said. “That struck me. I don’t get being jaded.”

But within a few years, Boswick saw something begin to change in the way the public thought about clowns. Some of the blame went to John Wayne Gacy, the prolific serial killer who had moonlighted as a clown named Pogo and later sold clown paintings from his cell on death row. Stephen King’s novel It, featuring the demonic Pennywise, lodged the idea of the evil clown more firmly in pop culture. The internet rendered it contagious. BuzzFeed regularly posts items like “Insane Clowns Are Haunting Southern California” and “21 Vintage Clown Photos That Will Make Your Skin Crawl.” The possessed clown doll that had a cameo in the original Poltergeist was front and center on the posters for the film’s reboot this month, and in September, Ten Speed Press will publish When Clowns Attack: A Guide to the Scariest People on Earth. 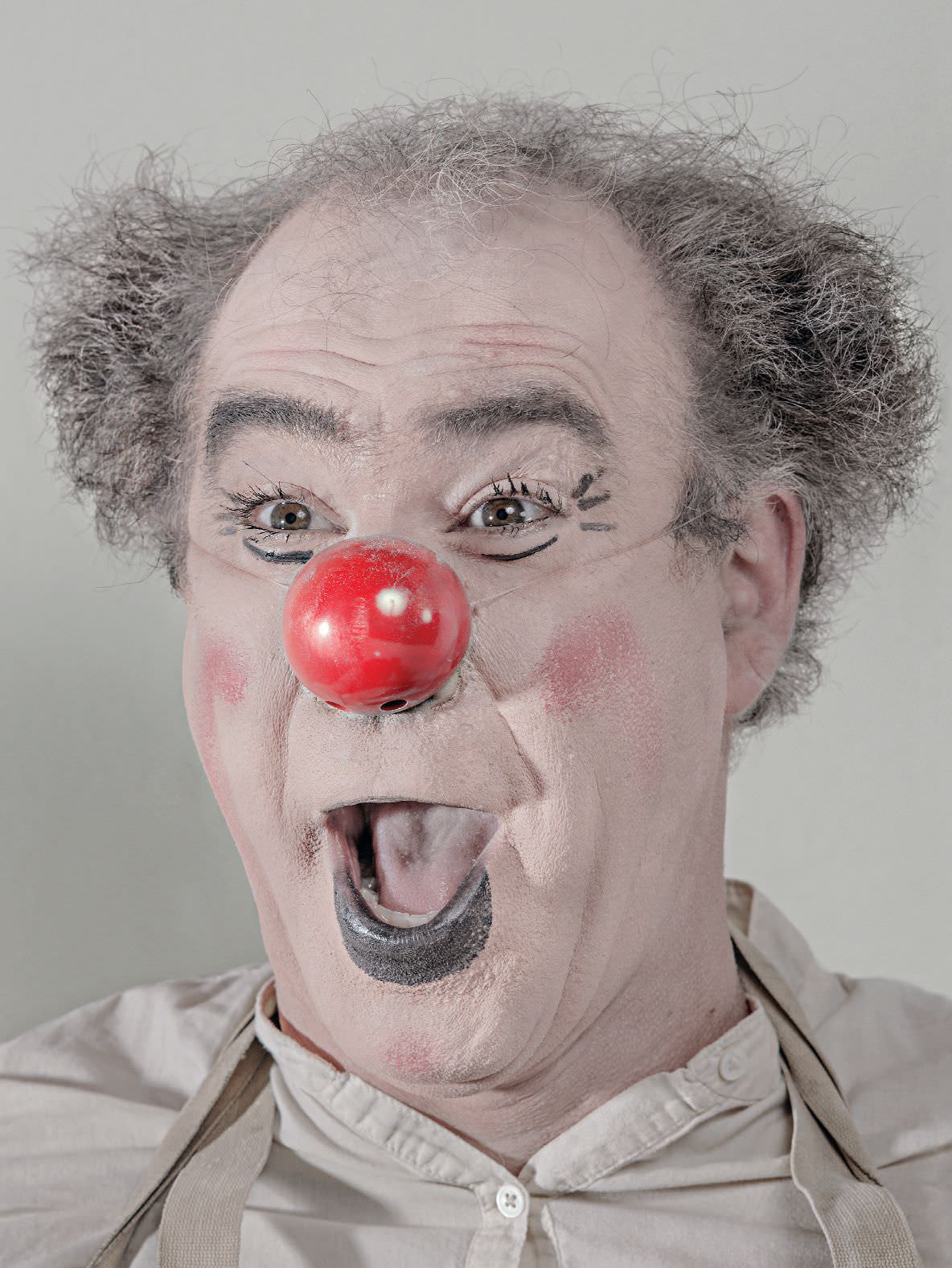 It’s true that a clown’s exaggerated face, both lifelike and not, is uncanny—one could argue it’s inherently disturbing. There’s also a cultural wariness, given the past decades’ illumination of pedophilia, of men in masks touching other people’s children. And professional clowns believe that the proliferation of untrained ones hasn’t helped. “As with any art form, there’s a lot of lousy clowns and mimes out there,” says Steve Smith, a former dean of the Ringling Bros. Clown College who is now creative director of the Circus Center in San Francisco. The same whiteface that may look great from the nosebleed seats at Madison Square Garden can produce sensory overload in a small gathering of children. “There are these huge organizations that turn out a lot of people with good intentions but who have no barriers and will scare the hell out of you,” Smith says. “If you’re facing a 3-year-old, don’t hover over them, get down on your knees. If they scream, go away.”

Though Boswick and other clowns allow that some children are genuinely afraid of them, in their experience most are not. Instead, they see clown fear among adults as a lazy pose, a jokey affectation that has become easy to adopt as clowns fade into irrelevancy and the number of people who’ve seen one in real life dwindles. “It’s a designer phobia, really pretentious,” says Sparky, a clown who lives a block away from Boswick. “I can tell a person who has a clownaphobia right away if they have it; 99.9 percent are phony. I’ve met maybe two people who have it. If they have it, they apologize profusely. The other ones go, ‘Oh, clowns are scary, that’s spooky.’ ” Boswick’s good friend Funnybone, who has worked in South America and Asia, says, “You go to another country, that concept of being afraid of clowns is nowhere. When I worked in Japan, I wore full clown makeup. It really is just something that’s happened here.”

Boswick isn’t hung up on the innocence of clowns. While some of his peers have gone as far as to protest unflattering portrayals—most recently, the amateur group Clowns of America International denounced American Horror Story: Freak Show’s Twisty, a disfigured and brain-injured kidnapper and murderer—Boswick is a fan of It and impersonated Twisty for an AHS-themed Halloween haunted house for a South Bay tech company. “I love scary clowns, and I think it’s all part of the big universe of what I do,” Boswick told me. He himself invented a character for a nightclub gig, Nasty Ass the Clown, who walks around chomping on a Tiparillo cigar, tying balloon animals out of condoms, growling, “Hey, nice tits!,” and telling off-color clown jokes.

Still, the denigration of clowns has had real-world consequences, and Boswick, like other children’s entertainers, has been forced to adapt. In the early ’90s, after seven years as a traditional whiteface clown, he switched, as nearly all clowns outside the circus now have, to less obtrusive makeup with a flesh-tone base. For his many appearances at libraries, Boswick has made putting on his makeup part of the show. For birthday parties, he now, like Funnybone, explicitly markets himself as wearing “kid-friendly makeup.” And among the list of “hints” he sends schools in advance is: “If there is a child that is afraid of clowns, let them watch Boswick from a distance. I promise, they will join the other children.” As parents booking children’s parties increasingly request clowns without makeup or, worse, magicians, Boswick has lately been trying on a new makeup-less character with a sort of 1870s-steamboat gambler look, and he’s been boning up on his sleight-of-hand skills.