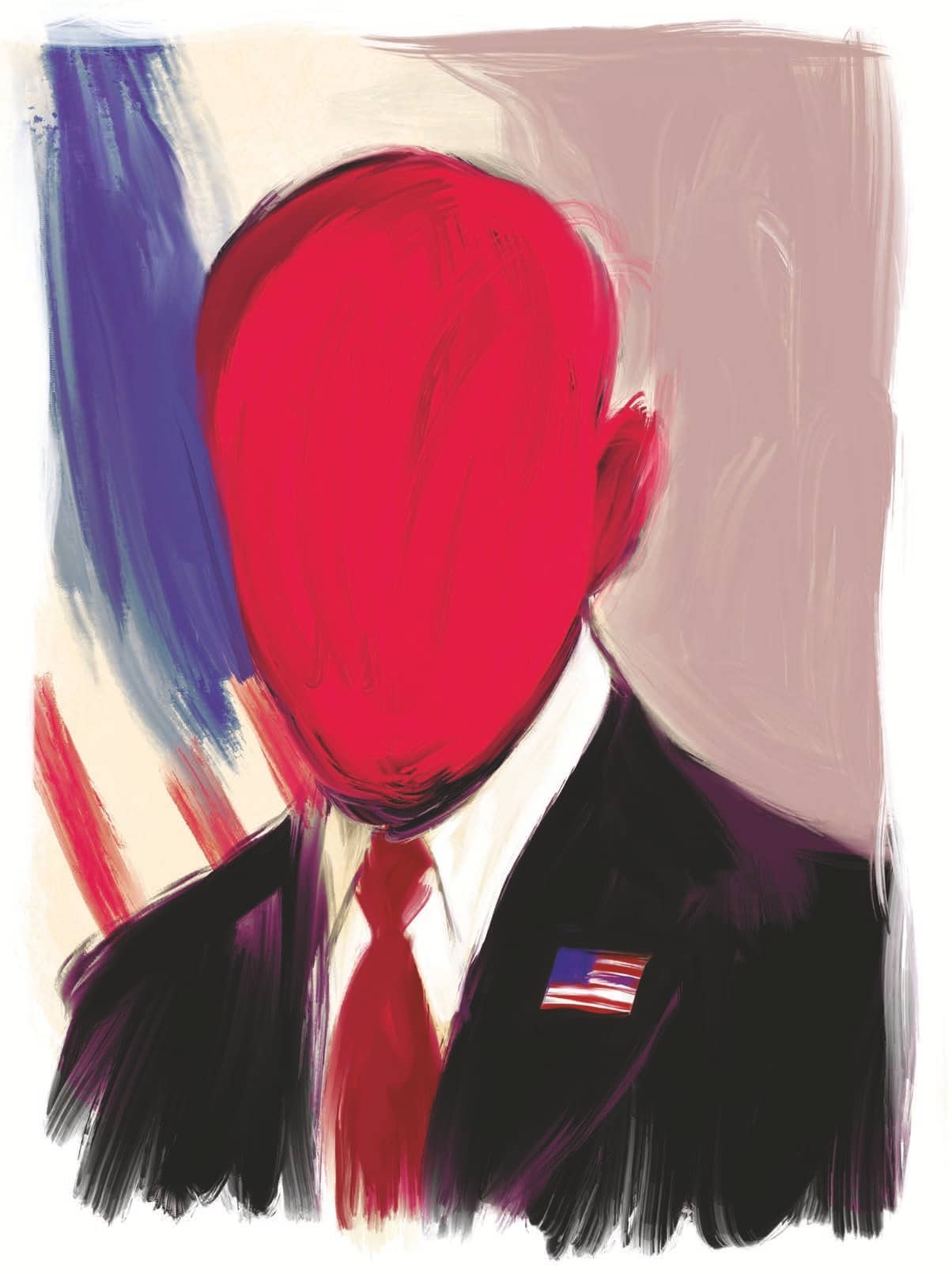 The torture self justification of one very powerful Trump loathing anonymous republican.

ONE AFTERNOON this year, a Washington Republican wove through packs of tourists on the Mall and considered, as he often did, the collapse of America. How would all of this appear from a distance? He looked at the monuments, lucent in the sun, and pictured them disfigured by centuries of neglect and carnage. “Do you ever think about how, 2,000 years from now, people are going to do what we’re doing right now how they do it in the Forum in Rome?” he said. “Unless it’s destroyed, the ruins of the Jefferson Memorial and the Lincoln Memorial”—he gestured over there and over there, where the future ruins would be crawling with Jetsons— “they’ll have their headsets, which will probably be a chip in their brain.”

While growing up in a coastal suburb, he first visited Washington on a class trip. “I don’t think it was very inspiring,” he said. “I’m a pretty cynical person.” He was not raised in a political family. (“I’m like Athena, sprung from the head of Zeus,” he joked.) But he loved history, and he decided he wanted to arrive here someday, work for someone powerful, contributing to what will become history tomorrow. “Did I become a Republican in high school because I agreed with them? Was it because I was a contrarian, or did I think it was cool?” he said. “Who knows. It’s academic at this point, anyway.” He registered as a Republican, and as soon as he could, he took on jobs with mainstream conservatives, which felt, at the time, a world away from the fringe movements and personalities of the day, though he did observe them with interest.

He was of the Establishment but never deluded about the righteousness of his chosen side. George W. Bush, for instance, couldn’t earn his support because of “how badly he had fucked up” the Iraq War. “I still don’t think Republicans have been held to account completely for that,” he said. The election of the country’s first Black president gave life to right-wing extremism, and over eight years, polarization and negative partisanship—or hatred of the other side—accelerated as it hadn’t since the Gingrich revolution. By the end of the Obama administration, the party sounded more like Glenn Beck than Barry Goldwater, and although mainstream conservatives liked to pretend that the “crazies” said little about them, there was no denying that a fear of such people motivated much decision-making in Washington. This transformation all but invited what happened next.

Yet, eyes open, the Republican hadn’t anticipated a moral inconvenience like Donald Trump. “We were still fundamentally sane until Trump became the nominee,” he said of his party. Like just about everybody else, he didn’t believe Trump’s campaign was serious at first and didn’t believe he would win the Republican nomination. “I was one of those idiots. I remember telling family members there was zero percent chance,” he said. “When he became the nominee, I almost quit.” But he didn’t. Instead, when the test came, he found it was possible—easy, even—to put up with what he didn’t agree with and didn’t want to be associated with in order to climb and survive in Washington.

He figured the era of Trump’s dominance of his party would be over in November 2016 when Hillary Clinton won the election, as most polling and most so-called experts suggested she would. That wasn’t so far away, and he was “too pragmatic” to leave a big job that he had worked hard to get, and that he liked having, over something that was only temporary. “You could just tough it out for a few months,” he said, recalling his thinking then. “I thought he would lose! I mean, everyone thought he would lose. The idea that he won is still shocking. This is a man who is so completely alien to what this country—the best principles of what this country is about. When I think about the fact that a hundred years from now, people will look back and say, ‘How the fuck did they think this was normal?,’ it makes me sad for the country. He’s a permanent scar on the face of our country.”

When people look back and say that, the “they” to whom they’ll be referring will include this Republican and others like him. Even as he likes to see himself as a passive player, unable to do much beyond enable the president, he knows that much is true. He understands that being carried along in the stream of narrow self-interest is what brought Trump to the presidency in the first place and has kept him there for almost four years. Officially, there’s little daylight between the party and the president, and this Republican works for one of the most powerful people in the country, which means, looked at in one way, that he’s working for Trump, too. “If you ask the average well-informed observer,” he said, “I think they would say most every Republican is working for him.”

This Republican works for one of the most powerful people in the country. Read that sentence again. Does it mean anything to you? When you think about it, it could mean almost anything, couldn’t it? He might work in the White House. He might be the vice-president. Or he might just work for the vice-president. He might be a member of the president’s Cabinet. Or he might work for a member of the president’s Cabinet. He might work on the president’s reelection campaign or for the Republican National Committee. He might be in congressional leadership or a member of the leadership’s staff. The chairman of a powerful congressional committee or the chair’s chief. The director of the deep state or the director’s intelligence agent. Someone you’d recognize or someone you’ve never heard of.