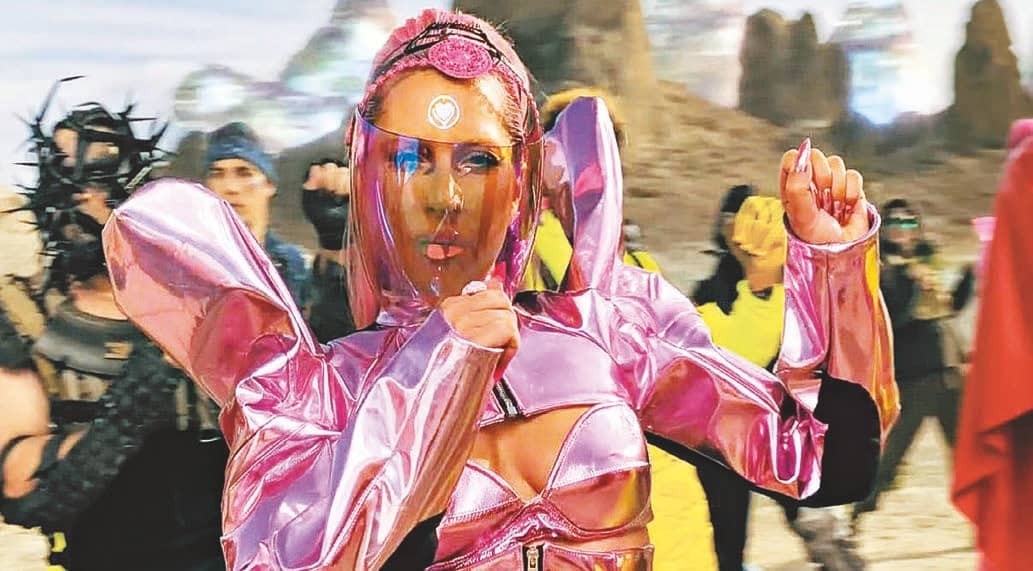 Craig Jenkins on Chromatica … Jen Chaney on Space Force … Alison Willmore on The Vast of Night.

Lady Gaga brings us back to the dance floor on Chromatica.

EARTH IS A DRAG. Humanity teeters on the brink of enlightenment, but money and power engender division, and selfishness and passivity are the feet of clay hindering advancement. Art provides escape. There’s a reason tough guys kicking villain ass do well at the box office in every decade, why songs about trying to make it to a better place have flourished over the years. Utopia is a through-line adjoining gospel, disco, rock, pop, rap, and country music, genres that have often been at odds. The common thread between the Staple Singers’ “I’ll Take You There,” Diana Ross & the Supremes’ “Someday We’ll Be Together,” John Lennon’s “Imagine,” 2Pac’s “Changes,” and the Carter Family’s “When the World’s on Fire” is the sense that there has got to be a better way, if not in life, then in the afterlife. Unrest is a constant, though it ebbs and flows like water. When the tide is high, the value of music is to remind us of what ties us together.

It is fortuitous for Chromatica, Lady Gaga’s disco lovefest dressed in intergalactic peace-punk clothes, to have crash-landed where it did, on the cusp of (socially distanced) Pride Month, smack in the middle of a worldwide outcry for equality. It’s on the nose for her politics and her music, as the author of the perennial Pride anthem “Born This Way,” the Trayvon Martin tribute “Angel Down,” and the assault victims’ solidarity song “Til It Happens to You.” Gaga’s art makes the personal political and the political personal. Given the halftime gig at Super Bowl 2017, she delivered a stage show featuring men in pinkish-purple capes and cut “God Bless America” with a sliver of “This Land Is Your Land,” the sort of socialist Woody Guthrie song written as a pointed rebuke, smuggling implied queerness and tacit liberalism into the nation’s preeminent jingoistic normie spectacle. Three years later, Chromatica offers a flight to a whole different planet.

Well, the videos at least suggest that. The real retreat Chromatica envisions is a gay club. Alongside regular collaborators like BloodPop, Madeon, and Benjamin Rice, Gaga has crafted a loving ode to classic house music, from the booming, chopped-up vocals in the chorus of opener “Alice,” which wink at vocal house standards like Aly-Us’s “Follow Me,” to closer “Babylon,” whose fake sax sounds and runway instructions seem built to be played at a ballroom competition. Chromatica is the hard reset The Fame/The Fame Monster fans have been waiting for. Gaga’s reined in the musical-theater and cabaret aspirations explored in her Cheek to Cheek and A Star Is Born eras; the cross-genre, multimedia ambitions of Artpop; the loving Shania Twain fan service of Joanne; and the hard-rock veneer of Born This Way. The back-to-basics, four-on-the-floor dance-pop exercises undergirding those albums’ adventures in marrying her music to other genres is the main current now. If you wished on A Star to serve more “Hair Body Face,” if you thought Joanne needed more “Perfect Illusion,” if you expected more “Applause” and less Volantis out of Artpop, this is your moment.

Chromatica’s streamlined approach makes for one of the leanest, shortest full-length albums in Gaga’s catalogue, and what’s true of the beats is true of the lyrics. She’s a straight shooter; every line aims for the jugular. Some are maybe not very subtle, like readings from a Lady Gaga lyric generator. It’s not necessarily a crime to sound too acutely like yourself. No one else on the modern pop spectrum could or would try to get away with some of these lines: “My name isn’t Alice, but I’ll keep looking for Wonderland”; “I’m still something if I don’t got a man.” She’s sharing wisdom gleaned in soulsearching therapy and trying to make it universal. Sometimes that leads to euphoric expressions of self-sufficiency like “Free Woman.” Sometimes you get pat, pleasant songs like “Plastic Doll” (which, in the grand scheme of lyrical metaphors likening people to marionettes, doesn’t quite fill out its felt shoes the way, say, Elvis Costello’s “Shabby Doll” or Hole’s “Doll Parts” does), and sometimes you get a “911,” an honest word about seeking comfort in medication and, if you listen selectively, a hall-of-fame popper anthem.