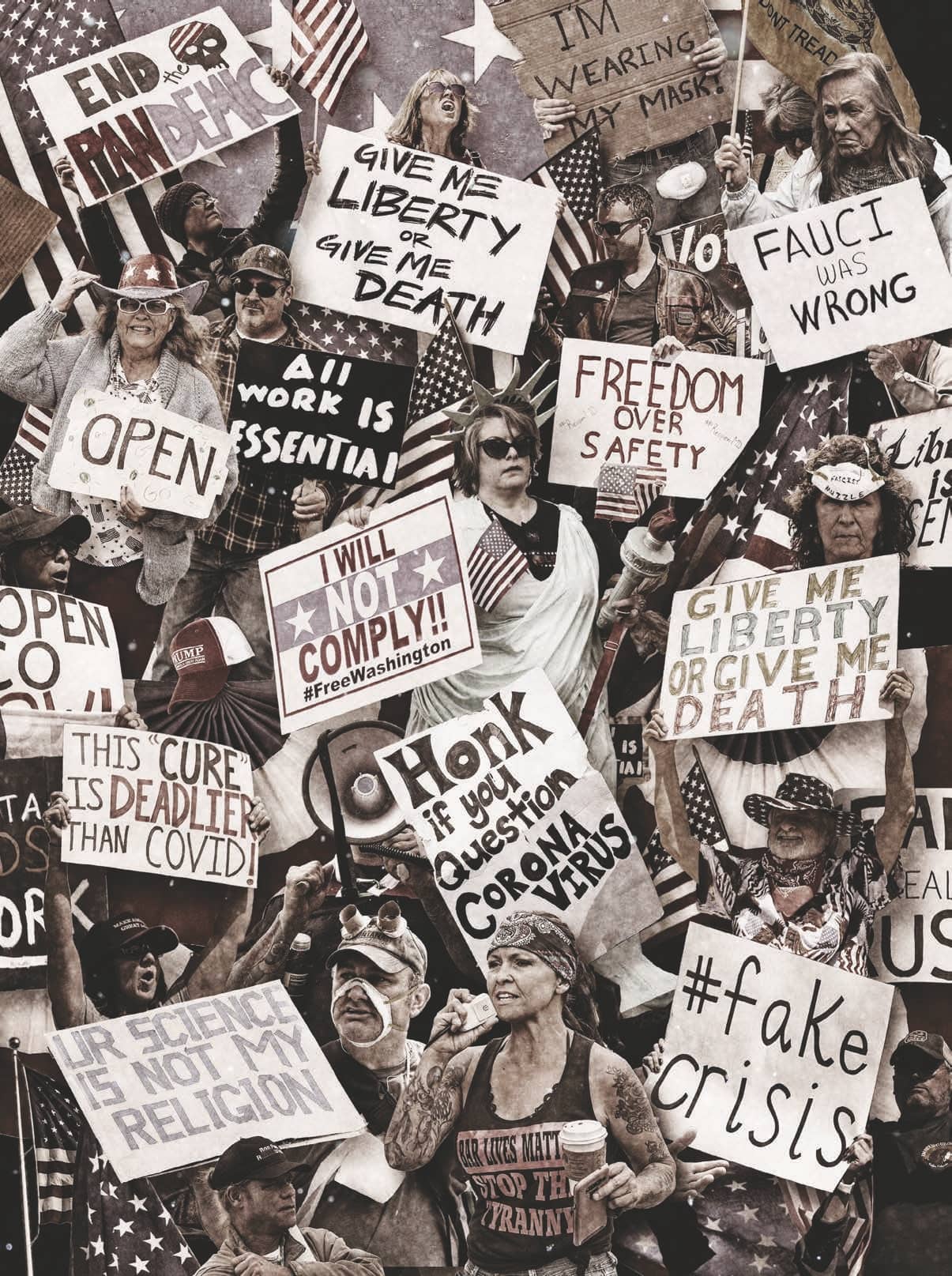 Why has the Republican response to the pandemic been so mind-bogglingly disastrous?

LAST OCTOBER, the Nuclear Threat Initiative and the Johns Hopkins Center for Health Security compiled a ranking system to assess the preparedness of 195 countries for the next global pandemic. Twenty-one-panel experts across the globe graded each country in 34 categories composed of 140 sub-indices. At the top of the rankings, peering down at 194 countries supposedly less equipped to withstand a pandemic, stood the United States of America.

It has since become horrifyingly clear that the experts missed something. The supposed world leader is in fact a viral petri dish of uncontained infection. By June, after most of the world had beaten back the coronavirus pandemic, the U.S., with 4 percent of the world’s population, accounted for 25 percent of its cases. Florida alone was seeing more new infections a week than China, Japan, Korea, Vietnam, Thailand, Malaysia, Indonesia, the Philippines, Australia, and the European Union combined.

During its long period of decline, the Ottoman Empire was called “the Sick Man of Europe.” The United States is now the sick man of the world, pitied by the same countries that once envied its pandemic preparedness—and, as recently as the 2014 Ebola outbreak, relied on its expertise to organize the global response.

Our former peer nations are now operating in a political context Americans would find unfathomable. Every other wealthy nation in the world has successfully beaten back the disease, at least significantly, and at least for now. New Zealand’s health minister was forced to resign after allowing two people who had tested positive for covid-19 to attend a funeral. The Italian Parliament heckled Prime Minister Giuseppe Conte when he briefly attempted to remove his mask to deliver a speech. In May—around the time Trump cheered demonstrators into the streets to protest stay-at-home orders— Boris Johnson’s top adviser set off a massive national scandal, complete with multiple calls for his resignation because he’d been caught driving to visit his parents during lockdown. If a Trump official had done the same, would any newspaper even have bothered to publish the story?

It is difficult for us Americans to imagine living in a country where violations so trivial (by our standards) provoke such an uproar. And if you’re tempted to see for yourself what it looks like, too bad—the E.U. has banned U.S. travelers for health reasons.

The distrust and open dismissal of expertise and authority may seem uniquely contemporary—a phenomenon of the Trump era, or the rise of online misinformation. But the president and his party are the products of a decades-long war against the functioning of good government, a collapse of trust in experts and empiricism, and the spread of a kind of magical thinking that flourishes in a hothouse atmosphere that can seal out reality. While it’s not exactly shocking to see a Republican administration be destroyed by incompetent management—it happened to the last one, after all—the willfulness of it is still mindboggling and has led to the unnecessary sickness and death of hundreds of thousands of people and the torpedoing of the reelection prospects of the president himself. Like Stalin’s purge of 30,000 Red Army members right before World War II, the central government has perversely chosen to disable the very asset that was intended to carry it through the crisis. Only this failure of leadership and management took place in a supposedly advanced democracy whose leadership succumbed to a debilitating and ultimately deadly ideological pathology.

HOW DID THIS HAPPEN? In 1973, Republicans trusted science more than religion, while Democrats trusted religion more than science. The reverse now holds true. In the meantime, working-class whites left the Democratic Party, which has increasingly taken on the outlook of the professional class with its trust in institutions and empiricism. The influx of working-class whites (especially religiously observant ones) has pushed Republicans toward increasingly paranoid varieties of populism.

This is the conventional history of rightwing populism—that it was a postwar backlash against the New Deal and the Republican Party’s inability or unwillingness to roll it back. The movement believed the government had been subverted, perhaps consciously, by conspirators seeking to impose some form of socialism, communism, or world government. Its “paranoid style,” so described by historian Richard Hofstadter, became warped with anti-intellectualism, reflecting a “conflict between businessmen of certain types and the New Deal bureaucracy, which has spilled over into a resentment of intellectuals and experts.” Its followers seemed prone to “a disorder in relation to authority, characterized by an inability to find other modes for human relationship than those of more or less complete domination or submission.” Perhaps this sounds like someone you’ve heard of.

But for all the virulence of conservative paranoia in American life, without the sanction of a major party exploiting and profiting from paranoia, and thereby encouraging its growth, the worldview remained relatively fringe. Some of the far right’s more colorful adherents, especially the 100,000 reactionaries who joined the John Birch Society, suspected the (then-novel, now uncontroversial) practice of adding small amounts of fluoride to water supplies to improve dental health was, in fact, a communist plot intended to weaken the populace. Still, the far right lacked power. Republican leaders held Joe McCarthy at arm’s length; Goldwater captured the nomination but went down in a landslide defeat. In the era of Sputnik, science was hardly a countercultural institution. “In the early Cold War period, science was associated with the military,” says sociologist Timothy O’Brien who, along with Shiri Noy, has studied the transformation. “When people thought about scientists, they thought about the Manhattan Project.” The scientist was calculating, cold, heartless, an authority figure against whom the caring, feeling liberal might rebel. Radicals in the ’60s often directed their protests against the scientists or laboratories that worked with the Pentagon.

But this began to change in the 1960s, along with everything else in American political and cultural life. New issues arose that tended to pit scientists against conservatives. Goldwater’s insouciant attitude toward the prospect of nuclear war with the Soviets provoked scientists to explain the impossibility of surviving atomic fallout and the formation of Scientists and Engineers for Johnson-Humphrey. New research by Rachel Carson about pollution and by Ralph Nader on the dangers of cars and other consumer products made science the linchpin of a vast new regulatory state. Business owners quickly grasped that stopping the advance of big government meant blunting the cultural and political authority of scientists. Expertise came to look like tyranny—or at least it was sold that way.

One tobacco company conceded privately in 1969 that it could not directly challenge the evidence of tobacco’s dangers but could make people wonder how solid the evidence really was. “Doubt,” the memo explained, “is our product.” In 1977, the conservative intellectual Irving Kristol urged business leaders to steer their donations away from public-interest causes and toward the burgeoning network of pro-business foundations. “Corporate philanthropy,” he wrote, “should not be, cannot be, disinterested.” The conservative think-tank scene exploded with reports questioning whether pollution, smoking, driving, and other profitable aspects of American capitalism were really as dangerous as the scientists said.

The Republican Party’s turn against science was slow and jagged, as most part identify changes tend to be. The Environmental Protection Agency had been created under Richard Nixon, and its former administrator, Russell Train, once recalled President Gerald Ford promising to support whatever auto-emissions guidelines his staff deemed necessary. “I want you to be totally comfortable in the fact that no effort whatsoever will be made to try to change your position in any way,” said Ford—a pledge that would be unimaginable for a contemporary Republican president to make. Not until Ronald Reagan did Republican presidents begin letting business interests overrule experts, as when his EPA used a “hit list” of scientists flagged by industry as hostile. And even Reagan toggled between giving business a free hand and listening to his advisers (as he did when he signed a landmark 1987 agreement to phase out substances that were depleting the ozone layer and a plan the next year to curtail acid rain).

The party’s rightward tilt accelerated in the 1990s. “With the collapse of the Soviet Union, Cold Warriors looked for another great threat,” wrote science historians Naomi Oreskes and Erik Conway. “They found it in environmentalism,” viewing climate change as a pretext to impose government control over the whole economy. Since the 1990s was also the decade in which scientific consensus solidified that greenhouse-gas emissions were permanently increasing temperatures, the political stakes of environmentalism soared.

The number of books criticizing environmentalism increased fivefold over the previous decade, and more than 90 percent cited evidence produced by right-wing foundations. Many of these tracts coursed with the same lurid paranoia as their McCarthy-era counterparts. This was when the conspiracy theory that is currently conventional wisdom on the right—that scientists across the globe conspired to exaggerate or falsify global warming data in order to increase their own power—first took root.

This is not just a story about elites. About a decade after business leaders launched their attack on science from above, a new front opened from below: Starting in the late 1970s, the religious right mobilized heavily as a lobbying force in American politics. Religious conservatives pressured the party to adopt a series of positions, including creationism, that put the party in conflict with scientists. The George W. Bush-era was punctuated by clashes between scientists and social conservatives, who resisted approval of an HPV vaccine to protect against sexually transmitted diseases, any sex education other than abstinence counseling, and federally funded research on stem cells. These came atop the now-customary complaints that the administration was turning environmental regulation over to energy lobbyists and ignoring warnings from scientists. Among the more distressing, and perhaps consequential, aspects of conservatives’ growing skepticism of science as a liberal universe was that, in a certain sense, it was—and becoming more so.