AOC – One Year In 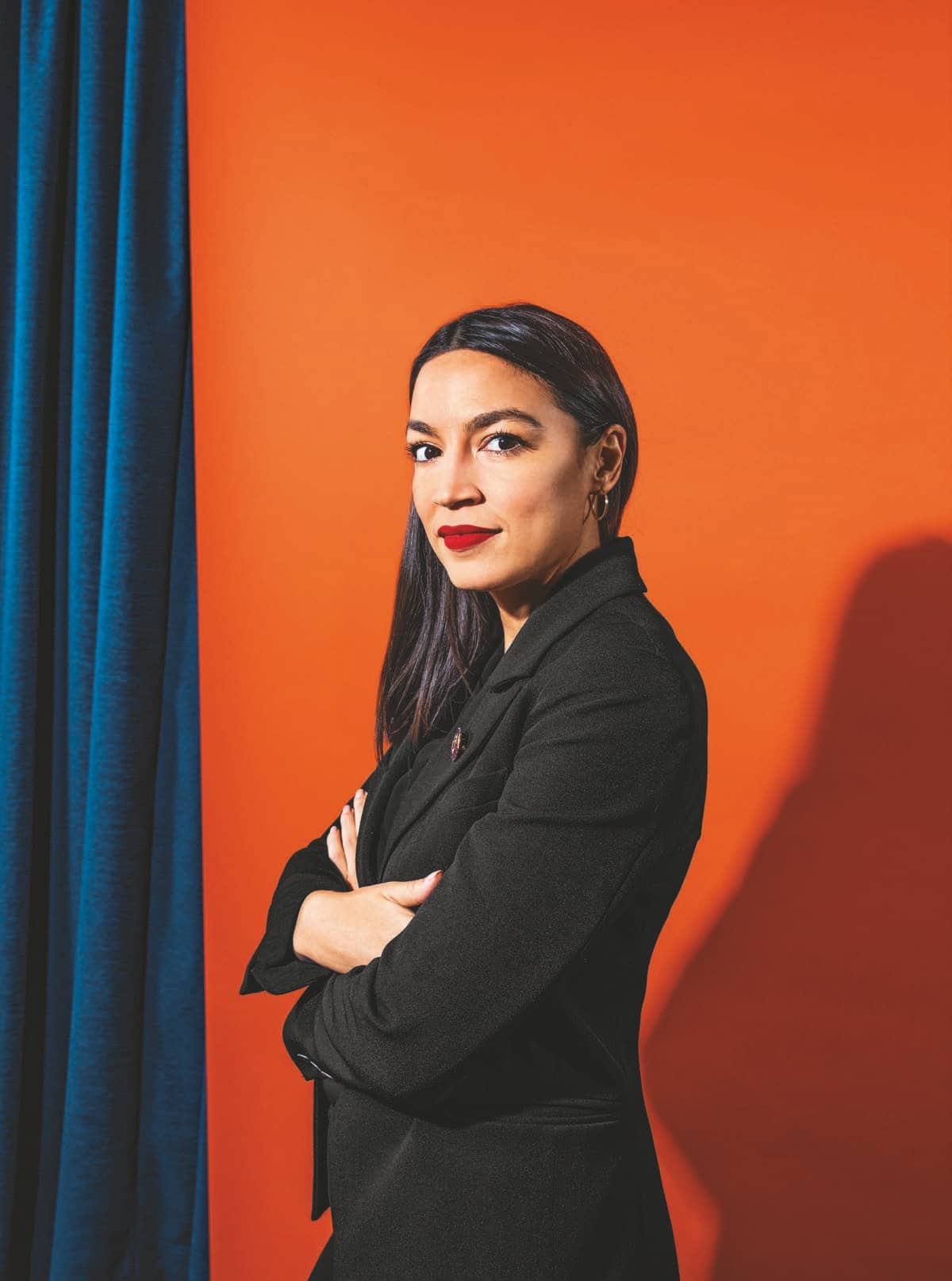 She reshaped her party’s legislative agenda, resuscitated Bernie Sanders’s presidential campaign, and hardly has a friend in Washington.
By David Freedlander, Photograpsh by David Williams

The corridors of Capitol Hill are marbled monotony, with Oxford heels clacking around corners indistinguisable from one another, white walls, oaken doors, and a steady rhythm of rectangular congressional nameplates.

Except for one. At the very end of a hallway in Cannon Office Building is an explosion of affirmation cribbed onto thousands of Post-it notes, a neon-green-and-pastel-pink flower bursting outward. Go there at the right time, Hill aides say, and you can see groups of people, usually women, often young, weeping at the sight of it.

“I love you from Maine! Keep on with your fierce, informed queen of a self!,” wrote Mikala from Bangor on a pink Post-it. “AOC! Seeing you is seeing me! I live in Michigan, but you are my representative. Adelante!,” says one on white signed (with a heart) from Kristen on August 1. “Dear AOC. Continue to scare old white men,” adds another.

They go on and on and on, these paeans to Alexandria Ocasio-Cortez, the 30-year-old freshman member of Congress from Queens and the Bronx, who, in the year since she was sworn in as the youngest woman elected to the House of Representatives in the body’s 230-year history, has emerged as perhaps the most significant political figure in the Democratic Party in the age of Trump. She was recently ranked the fourth-most-tweeted-about politician in the world, beating out every Democrat running for president. It’s not that there is already a children’s book about her, The ABCs of AOC. It’s that there is already a comic-book series about her, a young-adult biography of her, a wall calendar of her, a book of her quotes, a collection of essays about her, and even, this holiday season, a Christmas sweater with her face on it.

Ocasio-Cortez’s staff didn’t know what to do with the Post-its when they first started appearing after she was inaugurated in January 2019. It seemed possible they broke a House rule—and if not an official violation, it was a practice that, at the least, would mark her as different from the rest of the incoming class. Staff took the first batch and framed them in her office, but the notes kept coming. If anyone writes something negative or nasty, one of the myriad devotees who make the pilgrimage takes the errant note down before it can spoil the mood.

“It’s weird,” Ocasio-Cortez said when we spoke inside the Capitol Building one afternoon in mid-December as impeachment hearings consumed Washington.

“Because I know I am also one of the most hated people in America.”

As the rest of the world has changed, Congress remains a place of traditions. Even the chaos merchants—the Ted Cruzes and Rand Pauls and tricornered tea-party Republican congressmen—still end up playing by the rules as laid out by the leadership. Ocasio-Cortez, at least so far, has not. She is at once a movement politician and a cultural phenomenon, someone equally at home on CSPAN and Desus & Mero. She isn’t especially interested in compromising with those who don’t share her values, and isn’t afraid to be the lone “no” vote, as she was last January, when she was the only Democrat to vote against funding the government because it meant continuing to fund ice. Twelve months later, it is clear she isn’t trying very hard to amass power in Congress. Her heroes are Bernie Sanders, who withstood party pressure decade after decade in the Senate, and Howard Thurman, a mentor of Martin Luther King Jr.’s who believed in merging the spiritual and political. 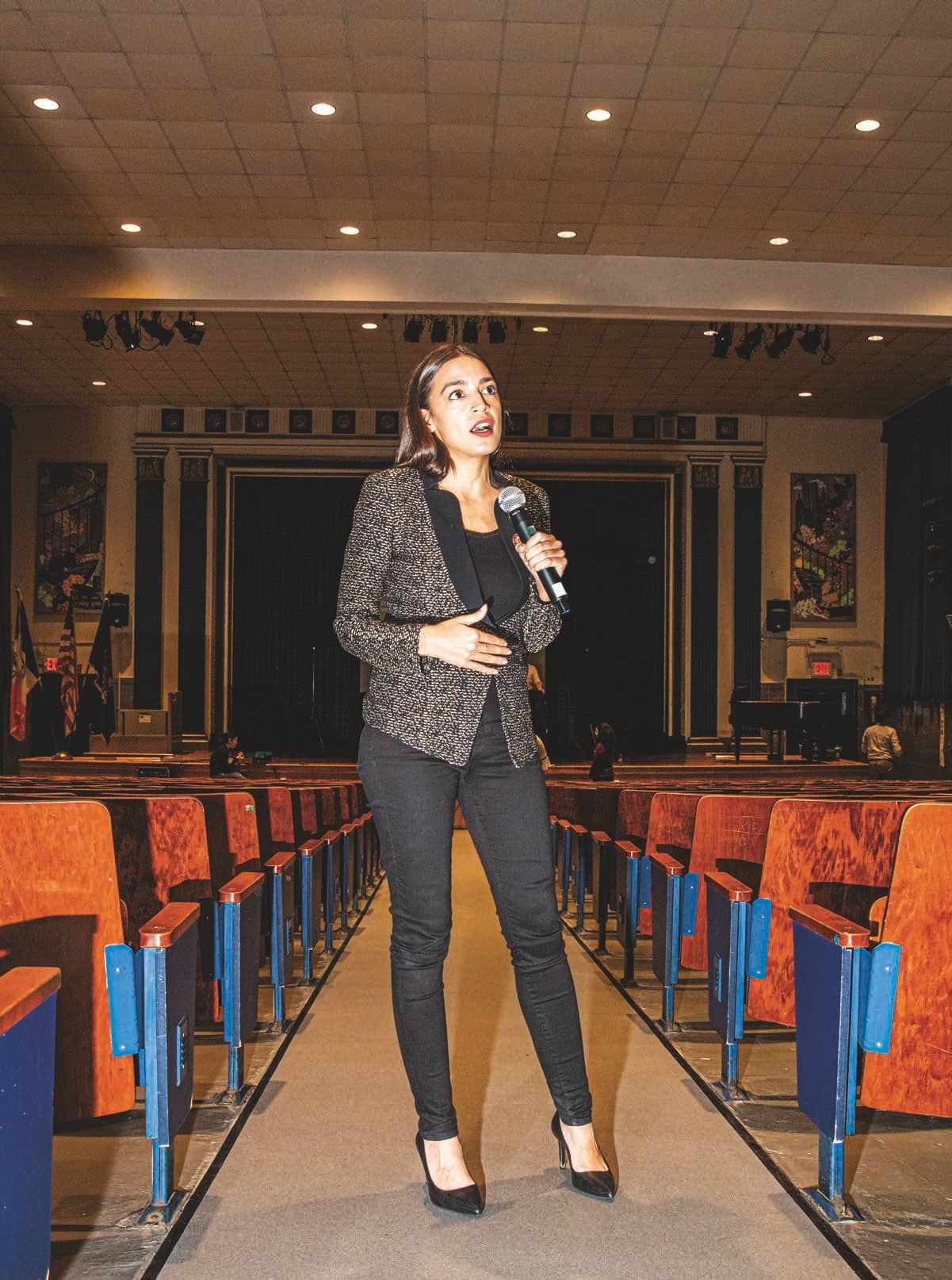 “People come here, and they have served in state legislatures or they may have been executives for health-insurance or fossil-fuel companies or lobbyist groups or pacs, and they’re part of this whole club,” she said. She was dressed in all black—blazer, blouse, pants, and boots, looking more like someone about to cruise out of the last shot of a movie on a motorcycle than someone skipping out on a House Financial Services Committee meeting. “What is it like to show up to Congress with a beginner’s mind? You just fundamentally do things differently.”

The Democratic congressional majority, she told me, is too acquiescent to the demands of its members in so-called red-to-blue districts—those moderates who flipped Republican seats and gave Pelosi the gavel. “For so long, when I first got in, people were like, ‘Oh, are you going to basically be a tea party of the left?’ And what people don’t realize is that there is a tea party of the left, but it’s on the right edges, the most conservative parts of the Democratic Party. So the Democratic Party has a role to play in this problem, and it’s like we’re not allowed to talk about it. We’re not allowed to talk about anything wrong the Democratic Party does,” she said. “I think I have created more room for dissent, and we’re learning to stretch our wings a little bit on the left.”

Ocasio-Cortez isn’t the first politician to become a cultural sensation, but she may be the first to do so at the very beginning of her career, when she is occupying the lowest rung of political power. Her main project going forward maybe this: harnessing her immense star power and the legion of young lefties who see her as their avatar, not just to push the Democratic Party away from an obsession with its most moderate members but also to make the stuff of government, like congressional committee hearings and neighborhood town halls, into must-see TV. She said the Congressional Progressive Caucus should start kicking people out if they stray too far from the party line. Other caucuses within the Democratic Party in Congress require applications, Ocasio-Cortez pointed out. But “they let anybody who the cat dragged in call themselves a progressive. There’s no standard,” she said.

The same goes for the party as a whole: “Democrats can be too big of a tent.”

It is comments like that that kept Ocasio-Cortez and the rest of the Democratic Party from reaching any kind of meaningful détente. I asked her what she thought her role would be as a member of Congress during, for instance, a Joe Biden presidency. “Oh God,” she said with a groan. “In any other country, Joe Biden and I would not be in the same party, but in America, we are.”

FOUR DAYS BEFORE Ocasio-Cortez won her primary in one of the biggest congressional upsets in at least a generation, I stood with her on a street corner in Queens, across from a bodega, underneath the 7 train, and not far from the housing project where she had been canvassing. Long-shot candidates for Congress tend to sound the same. They have a compelling bio, can lay out a theory of why they should win and how the entrenched incumbent has been absent or ignored community voices or kowtowed to the powers in Washington, but they often crumple under sustained questioning and have fantastic views of how politics works.

Ocasio-Cortez was different. She was a bartender who had come up through a network of post-2016 millennial activist groups and been recruited to run by the progressive pac Brand New Congress 18 months earlier. As she went door-to-door, talking to voters, her answers came in mic-drop paragraphs. She saw politics as a rigged system that preserved the careers of those in power at the expense of the poor and working class. Her face that June was ubiquitous in the neighborhood, the result of her army of volunteers blitzing the district with palm cards and posters. Her time in the service industry seemed to make her an unusually empathetic listener. For the most part, here was someone who looked liked her district’s voters, who spoke their language, who had come to ask for their support.

What Makes a Viral AOC Moment? 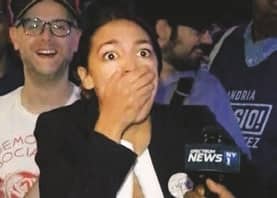 The image of a stunned Ocasio-Cortez at her victory party came to simbolize the blue wave.