A Word on Seinfeld 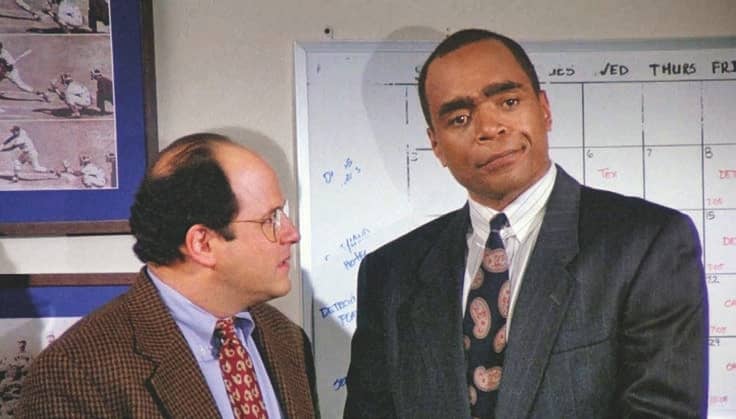 The things you notice when you rewatch, rather than cancel, old sitcoms.

White sitcoms have of late united, disavowing the misbegotten race play of television’s recent past. Contrary to prior negligence, shows such as Scrubs and 30 Rock have pulled episodes featuring blackface from streaming platforms as a way of making amends. Even episodes like It’s Always Sunny in Philadelphia’s “Dee Reynolds: Shaping America’s Youth,” which cracks wise about the absurdities of racial performance, got the ax. I was something akin to relieved upon my Seinfeld rewatch to find Michael Richards’s scorched visage, grinning like Sambo, still intact on the episode “The Wife.”

Exorcisms are boring these days—that is, exorcisms of a PR sort, which give the impression that race arrives only when we perceive it and evaporates with every redacted slur. After all, the American sitcom, like so many national institutions, has an earned reputation for segregation. There are the vaunted Black classics and then there are the shows that are containers for white stories, which present an urbanscape—usually New York City— whose multiculturalism goes unseen.

But Black people have never been nonexistent, or invisible, in the white sitcom. They have been invisible only in the way that Black people who service the margins of white world-making must be. In a genre whose conventions (and hilarity) thrive on white ridiculousness, Black people, relegated to the smallest of parts, exist to rein in the free play of whites, reminding viewers how safely deviant the main cast can be. No show exhibits this effect as quietly as the one that crested in lockstep with the ’90s culture wars, the quintessential sitcom and, in one woman’s opinion, the greatest—Seinfeld.

I speak of certain characters often deprived of a name: The Florist (Lionel Mark Smith in “The Gum”); the Agency Rep (Victoria Dillard, “The Old Man”); the Orderly, who bars George from his fiancée’s cousin’s delivery room (Charles Emmett, “The Seven”). There are the two Walters— Walter (Wayne Wilderson) and Other Walter (Mark Daniel Cade)—who saddle Elaine with too much cake (“The Frogger”); the co-producer of Scarsdale Surprise (Tucker Smallwood), who arrives with a threat to take Kramer’s Tony away (“The Summer of George”); all the people George stalks, desperate for a friend to call “Black” (“The Diplomat’s Club”), some of them with names, such as Joe (Robert Hooks) and Remy (Diana Theodore), a father and daughter who’ve already made the mistake of letting this nebbish into their lives and onto their now-juice-stained couch (“The Couch”).