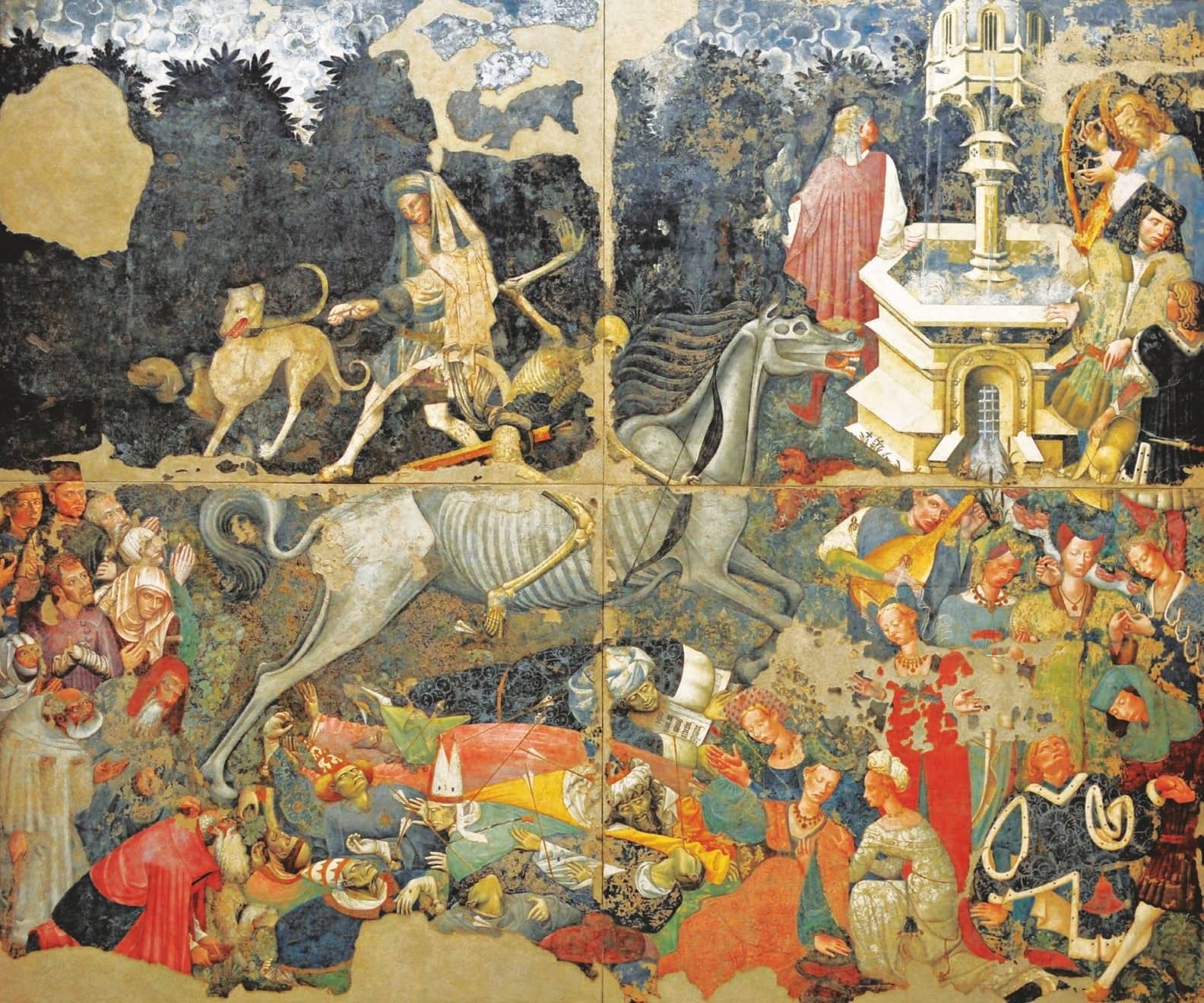 The meaning of this one is in our hands.

IT’S STRANGE THAT we now see America threatened by a plague. Because without plague, America, as we know it, wouldn’t exist.

It may have been the most devastating epidemic in the history of humankind—surpassing in its mortality rates any before or since, including the Black Death in the Europe of the mid-14th century. Smallpox arrived in America with the first Europeans and went on, with several other imported diseases, to wipe out up to 90 percent of the Native population in a relatively short amount of time—millions and maybe tens of millions died.

They were horrible, harrowing deaths. The virus Variola major incubated for two weeks, followed by an intense few days of fever, before the pustules emerged: first in the mouth, throat, and nasal passages, then all over the body, including around the eyes, where they often caused blindness. A human being would struggle for perhaps ten days, covered in these sores, erupting in bloody and pus-filled bumps—and then, with luck, the illness subsided. The sores healed; the pockmarks, highly visible on the face, remained. The residue from these sores was also terribly infectious and lingered on surfaces or cloth for years—but scholars now consider the vast majority of deaths, just like those from covid-19, to have been from human-to-human transmission.

Much of the terror of this experience is lost to us moderns because a great deal of the death and suffering occurred before Europeans were even able to witness and record it (though, of course, the trauma for the Indigenous reverberated for centuries). But we do know why the toll was so high. Those Native Americans had been the first to discover this continent and, with it, their own sort of American Dream—thousands of years before Europeans imagined theirs. They had first arrived, probably over the Bering Land Bridge connecting Alaska and Russia, around 15,000 years ago, give or take a few millennia, and they found a whole new world, with no humans at all, packed with huge beasts relatively easy to kill with spears, vast prairies, and natural resources that allowed a vibrant hunter-gatherer population to grow as they conquered a virgin continent. It’s not hard to imagine how miraculous this must have felt in the collective memory of these peoples: a long human journey through the bleakest of landscapes into a land of astonishing fecundity—and no human competition.

But because they were often hunter-gatherers, with only a partial reliance on agriculture, they appear to have had little knowledge or experience of plague and no contact with any of the epidemics that had, by then, ravaged Europeans and Eurasians for a few millennia. They domesticated fewer animals and had developed some immunities to many bugs they encountered in their environment.

In this respect, they were blissfully typical of most humans in prehistory. Our species seems never to have experienced epidemic diseases for the vast majority of our time on earth, encountering them only when we settled down, formed stable, concentrated communities, and started farming and domesticating animals for food. Plagues were usually a function of diseases that jumped from precisely those animals in close proximity and spread through concentrations of the human population in settlements, villages, towns, and cities as civilization began. Humans lived in more intimate relations with animals; their settlements compounded filth, infected water, fleas, and excrement human and animal. We were unknowingly creating a petri dish and calling it home.

We are wrong, therefore, to think of plague entirely as a threat to civilization. Plague is an effect of civilization. The waves of sickness through human history in the past 5,000 years (and not before) attest to this, and the outbreaks often became more devastating the bigger the settlements and the greater the agriculture and the more evolved the trade and travel. What made the American plague of the 16th century so brutal was that it met a virgin population with no immunity whatever. The nightmare that humans had been dealing with and adapting to in Europe and Asia for millennia came suddenly to this continent all at once, and the population had no defense at all. The New World became a stage on which all the accumulated viral horrors of the Old World converged.

That’s why we live in a genocidal graveyard. We always have. But if plague was created by mass urban living, and spread through trade and travel, and made much more likely with every new foray into virgin territory, then this story is far from over because those stories, of course, are far from over as well. As the human population reaches an unprecedented peak, as cities grow, as climate change accelerates environmental disruption, and as globalization connects every human with every other one, we have, in fact, created a near-perfect environment for a novel pathogen-level breakout. covid-19 is just a reminder of that ineluctable fact and that worse outbreaks are almost certain to come. Compared with past epidemics, this one is, mercifully, relatively mild in its viral impact, even though its cultural and political effects may well be huge. Compared with future ones, against which we may also have no immunity at all, it could serve as a harbinger: We could be the next generation to discover a promised land, only to have it taken brutally and terrifyingly away.

PLAGUES HAVE OFTEN been catalyzing events, entering human history like asteroids hitting a planet. They kill shocking numbers of people and leave many more rudderless, coping with massive loss, incalculable grief, and, often, social collapse. They reorder the natural world, at least for a time, as human cities and towns recede and animal life reemerges and microbes evolve and regroup. They suspend a society in midair and traumatize it, taking it out of its regular patterns and intimating new possible futures. In some cases, a society redefines itself. In others, trauma seems the only consequence.

Imagine, for a moment, what confronted the understandably complacent Romans of the second century CE. Out of the blue, their unparalleled civilization was beset by a disease that they had never known before and that began killing people in staggering numbers. For much of Roman history, they had lived in a near-ideal climate: warm, wet, and relatively stable. Trade was growing, wealth was accumulating, and globalization—via trade across the Indian Ocean and new roads connecting all parts of the empire—was reaching a peak. But in 43 BCE, the first climate shock came, as a volcanic eruption from as far away as Alaska prompted a sudden cold spell, and then, during the second and third centuries, a far more variable and colder climate set in, prompting distant animal species, with their own viruses, to move territory, creating new pathways for pathogens to break out of their familiar habitats.

The disease burden among Romans was already high and getting higher, as Kyle Harper has explored in his groundbreaking book The Fate of Rome. Bigger settlements and cities, combined with appalling hygiene (open-cesspool toilets were usually located within the house) and close proximity with domesticated animals, created a network of danger zones. Malaria was a constant, diarrhea ubiquitous; tuberculosis became more common; leprosy arrived and stayed. Some viruses—like Tatera poxvirus and a few of its relatives —were carried by only a single species, such as camels or naked-soled gerbils, but they could jump species in certain circumstances, from animals to humans if any were nearby, and then from human to human.

When the inevitable epidemic arrived, in what was likely a form of smallpox, it was one of the deadliest enemies the Romans had ever faced. Its symptoms were, in Harper’s words, “fever, a black pustular rash, conjunctival irritation, ulceration deep in the windpipe, and black or bloody stools.” The asymptomatic period was about ten days, easily allowing those infected to travel with no one knowing, and death often came within a week or two. By 172 CE, what is now known as the Antonine plague had devastated the Roman military and killed somewhere around one out of every ten people in the Roman Empire. It came and went for at least the better part of a decade, culling the population mercilessly.

Rome staggered on at first, rebuilding and repopulating, and seemed to recover. But as the climate churned, another pathogen wrought havoc, a virus Harper suggests may have been related to Ebola, which caused bloody eyes, a bloody esophagus, and bloody diarrhea. This one hit a society already weakened, and this time, Rome struggled to survive. Mercifully, there was an epidemiological reprieve in the following centuries, allowing some population recovery. But then an extraordinary series of volcanic eruptions in the year 536 shifted the odds again. The volcanic activity was greater than at any point in the past 3,000 years, spewing a massive amount of debris into the atmosphere, clouding the sun for over a year, destroying crops from China to Ireland, and, once again, producing shifts in microbial and animal behavior. Procopius, a Byzantine historian, noted, “For the sun gave forth its light without brightness, like the moon, during this whole year.”

It was likely this sudden weather shift that rebooted human epidemics in the sixth century. Harper notes that volcanic, climate, and weather events affect a whole variety of species. Among them, crucially, are rodents, who may respond by moving out of their accustomed habitat to find warmer or wetter territory, and who naturally carry with them their own viruses and bacteria. A current scholarly hypothesis is that it was probably Chinese marmots, carrying a bacterium called Yersinia pestis, that, in these cold years, moved territory and transferred this pathogen to other rodent populations they interacted with, likely by sharing fleas. Among these new carriers were the enterprising and highly mobile black rats, often called ship rats because of their propensity to follow grain and food across the oceans. Scientists have also discovered a mutation in Y. pestis in just a single protein-coding gene that emerged, they believe, right before the Roman outbreak in the rat population, making the rodent disease suddenly more transmissible via fleas. 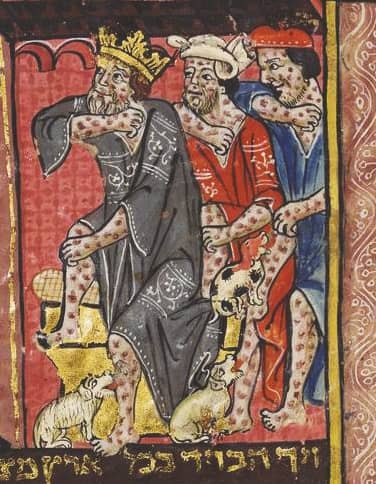 And soon enough, those black rats arrived in the Roman port of Alexandria. They carried with them their own parasite, a flea that lived on the rats’ blood and could survive up to six weeks without a host—making it capable of enduring long sea voyages. And as the bacteria spread among the rats, and their population began to collapse, the fleas, desperate for food, sought alternatives. Living very close to the rats, humans were an easy target. Before too long, the bacterium was everywhere, because, once in human blood, it could also be spread via droplets in human breath. For several days after infection, you were asymptomatic, then grotesque black buboes appeared on your body—swollen lymph nodes near where the fleas had bitten. Death often came several days later.

John of Ephesus noted that as people “were looking at each other and talking, they began to totter and fell either in the streets or at home, in harbors, on ships, in churches, and everywhere.” As he traveled in what is now Turkey, he was surrounded by death: “Day by day, we too—like everybody—knocked at the gate to the tomb … We saw desolate and groaning villages and corpses spread out on the earth, with no one to take up [and bury] them.” The population of Constantinople was probably reduced by between 50 and 60 percent. The first onslaught happened so quickly the streets became blocked by corpses, the dead “trodden upon by feet and trampled like spoiled grapes … the corpse which was trampled, sank and was immersed in the pus of those below it,” as John put it.