Now that I had a proven design for the paddles, I wanted to construct my own paddle ship to fully test and evolve my prototypes. I had decided to model one of the European inland lake paddle steamers and after trawling the internet for a suitable project, I settled on the Patria, one of two paddlers serving the tourist cruise trade on Lake Como; the other being the Concordia. Although there are quite a few paddle steamers on the waters of the European lakes, the Patria proved to be the one which turned up the greatest number of visual references to work from.

The Patria and Concordia both entered service on Lake Como in the mid-1920’s and have enjoyed a chequered history of service, lay-up and refit ever since. 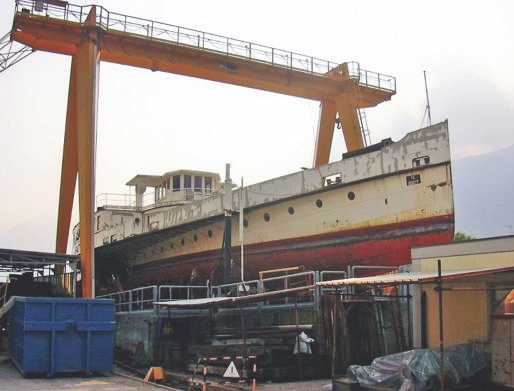 The Patria, originally launched as the Savioia in 1926, was in service until a refit in the 1970’s followed by a continuing busy career until she was withdrawn from service in 1990. Enthusiasts pushed for her conservation and restoration until, in 2004, she was officially handed over to the ownership of the local ‘Provincia di Como’ for a nominal one Euro. The ship was drydocked on the shores of Lake Como at Dervio for inspection and initial hull restoration and a new management company, ‘AVE Navigazione’ was formed to oversee the work and guide the ship back into service (Photo 1 & 2). Several more years of hard slog and fund raising followed, including a grant of 1,300,000 Euros. By May of 2013 the Patria had been re-boilered and passed her first steam powered sailing tests.

In July 2013 Patria sailed to the town of Como for the first time in 23 years where the formal speeches and celebrations took place to welcome her back into service (Photo 3). Since then sailings have been limited. Patria is currently moored outside the Villa Olmo and is open to the public and often used for events

(Photo 4). In March 2018 the Italian press reported that the ship was to be transformed into a luxury ‘Dolce & Gabbana’ store for the duration of a fashion event at the neighbouring villa in return for a 10,000 Euro donation. Substantially more funding is still needed to fully equip and crew the Patria. The Concordia is currently the only paddler in regular service on Lake Como. 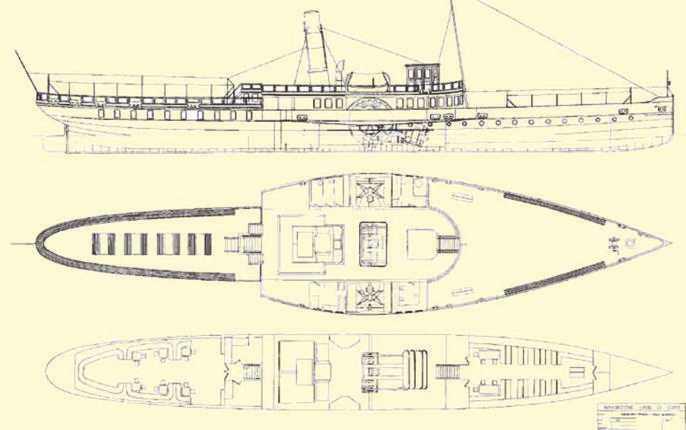 The internet has become the greatest and most immediate source of imagery and information for model making. I managed to find a lot of photos of the Patria from virtually every angle, giving detailed and abundant building references, but it proved difficult to source a plan which was reasonably accurate. The closest plan image I found was of the Lake Como Paddle steamer Milano (Photo 5). Strangely, it was converted in 1926 from a paddle steamer to screw propulsion. The paddle boxes were retained, and I understand the ship still operates on Lake Como. It is identical in hull design and paddle box and superstructure layout to the Patria.

I downloaded and opened the plan of Milano in the Inkscape drawing program, scaling it to 1/48, which gave a length OA of around 1120mm. Although the image was of quite low resolution and pixelated when magnified to 1/48, it was clear enough to give a good guide to draw over the outlines of frames and keel components ready to cut in mainly 1.5 and 4mm ply. I completed a full set of working plans showing as much detail as I could glean from the images I had downloaded. I produced a second set of drawings in Inkscape which could be used to cut the various model components on the laser cutter; frames, keel and decking.