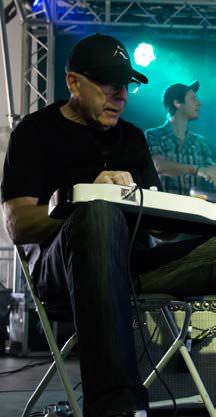 Ramblin' Man fair is one event on the lengthy festival calendar that you do not want to miss - or at least that's the impression that I received after a weekend spent bellowing out some of my all time Country favourites alongside other epic Country fans.

Running from July 28 - 30 (Friday to Sunday) the event marked a celebration of Country and rock and roll and consisted of four stages: the Planet Rock Main Stage, Grooverider Stage, The Rising Stage and last but certainly not least, the Outlaw Country Stage sponsored by

Perhaps it was the whisky, beer and elderflower gin set up close to the tent housing the Outlaw Country Stage, but it certainly did feel that the spectators to the marquee made up the very best of audience members. For instance, first up, Caitlin Koch, and the audience members were swaying along, letting out their enthusiasm in spite of the dismal rain pouring down outside. The highlight of Koch's set was undoubtedly 'Run To The River' from the breakthrough EP 'I Am Caitlin' and constitutes the artist's own favourite track, too. Caitlin herself praised the audience backstage after the show, calling out fans for their dedication and calling her performance, "So much fun! It's such an honour and a blessing to be here..." During the soundcheck, festival goers had been gathered outside in anticipation for the show to start and for a moment, Caitlin had thought she would face a lonesome performance but by the time the singer's sultry tones rang out, the space was packed to the brim!