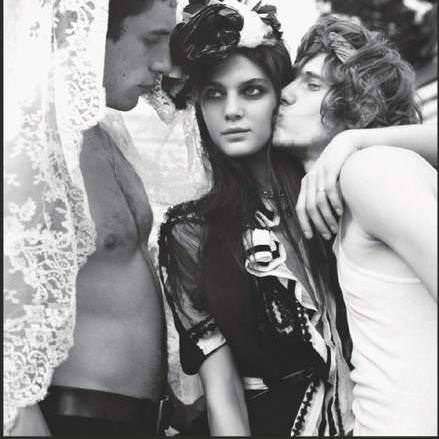 Committing to more than one person (male, female or both), refusing to be defined by gender Dolly Alderton explores the new dynamics of love and sex.

We all know how a love story is meant to go.

Boy meets girl, girl and boy date. Girl and boy move into house, they buy a Le Creuset casserole dish. Boy proposes, girl puts it on Instagram (‘he liked it so he put a ring on it’), boy and girl get married and hang bunting in a marquee. Girl gets pregnant and announces it on Facebook. Girl has baby. Boy and girl buy bigger car, boy and girl have another baby, boy and girl live happily ever after. Bit bored? Worried you’ll never want to follow that particular formula? Me, too. So what about the women who are breaking out of the template and rejecting traditional rules of love – be that monogamy or gender preference or indeed gender identification? After all, while boy meets girl may be the oldest love story, it certainly isn’t shatter-proof. On the whole, US studies have shown that a staggering 50-60 per cent of men and 45-55 per cent of women cheat within a marriage*. For centuries we’ve been told we are creatures of monogamous habit, but the facts disagree. Perhaps it’s time to amend the rules to align with the reality of being human.

Polyamory, put simply, is the practice of having more than one partner at the same time. But hold your presumptions of car keys in a fruit bowl. When I speak to women for whom polyamory is a committed and important part of their lives, I realise it’s far more complex than just having lots of sex. Hannah, a 26-year-old PhD student, has been in various polyamorous relationships for five years. It began when she dated a man who was seeing other people; from there, she started a relationship with another couple.

‘We weren’t all having sex together,’ she explains. ‘I individually dated two people who happened to also be a couple. So we were in a triangle, but it wasn’t a threesome.’ She was then in a relationship with a man for nearly three years, during which they saw other people, both male and female. Now, she’s in a relationship with a woman. ‘For me it’s about deepening my emotional repertoire. What I fnd exciting about polyamory is that I can walk into a room of strangers and any one of them might be someone I could fall in love with… There’s an abundance of love in my life and that’s wonderful.’