How To Be Lonely (and own it) 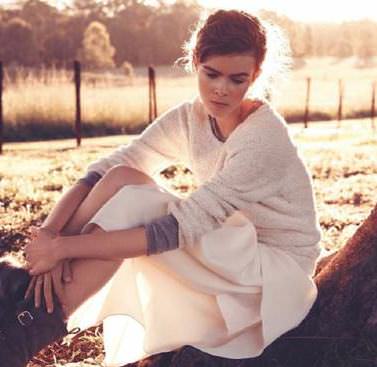 Its official. Britain is the loneliness capital of Europe - and its young women who are feeling it the most. Anna Moore reports on how the ache of isolation can hit at any time, however busy and social you are.

HOLLY’S LIFE IS FULL-ON. WITH A CORDON BLEU diploma under her belt, she has embraced a career as a chef, starting out as a prep cook in a busy London restaurant, and she loves it. The pace is crazy and the shifts are long, and when she finally heads home, she has six housemates, all of whom she counts as friends. Her life is right on track. So why, at odd moments, does this 27-year-old feel a fleeting pain in the pit of her stomach?

‘It almost takes me by surprise,’ she says. ‘It could be when I’m alone on my day off, but it’s as likely to happen when we’re all together, watching our Mad Men box set. It always fades eventually, but it’s a horrible emptiness.’

It’s hard to recognise loneliness in a world where we’re constantly connected, but Britain is the loneliness capital of Europe, according to the Office for National Statistics. We are the least likely nation to have strong friendships, know our neighbours or have anyone to turn to in a crisis. Loneliness is not just uncomfortable, it’s also a massive health threat – twice as damaging as obesity, and carrying the impact of 15 cigarettes a day.

We associate this condition with the housebound elderly yet, in fact, the younger you are, the more likely you are to feel lonely – 53 per cent of the 18-34 age group compared to 32 per cent of those over 55, according to the Mental Health Foundation. And though women may seem so much better at friendships and intimacy, we’re actually more likely to feel lonely than men are.

According to psychotherapist John Barton, who treats loneliness and has written about it extensively, loneliness is ‘a helplessness or hopelessness. It could make you feel bereft, drained of energy and unable to go anywhere or speak to anyone; or it could feel like a kind of anxiety, where you just can’t be still, where you’re forced to stay busy. One client told me it felt like a where you’re forced to stay busy. One client “big black cloud” that would engulf her if she slowed down for a minute.’

So, what differentiates this from depression? ‘Well, if depression is a kind of numbing and a shutting down, loneliness is pain,’ says Barton. ‘It’s a message from your psyche saying you need more contact and intimacy. It’s a warning, a call to change things, and it’s designed to hurt. It’s common for the pain of loneliness to lead to depression, or vice versa. But it’s also possible to be lonely but not depressed, or depressed but not lonely.’