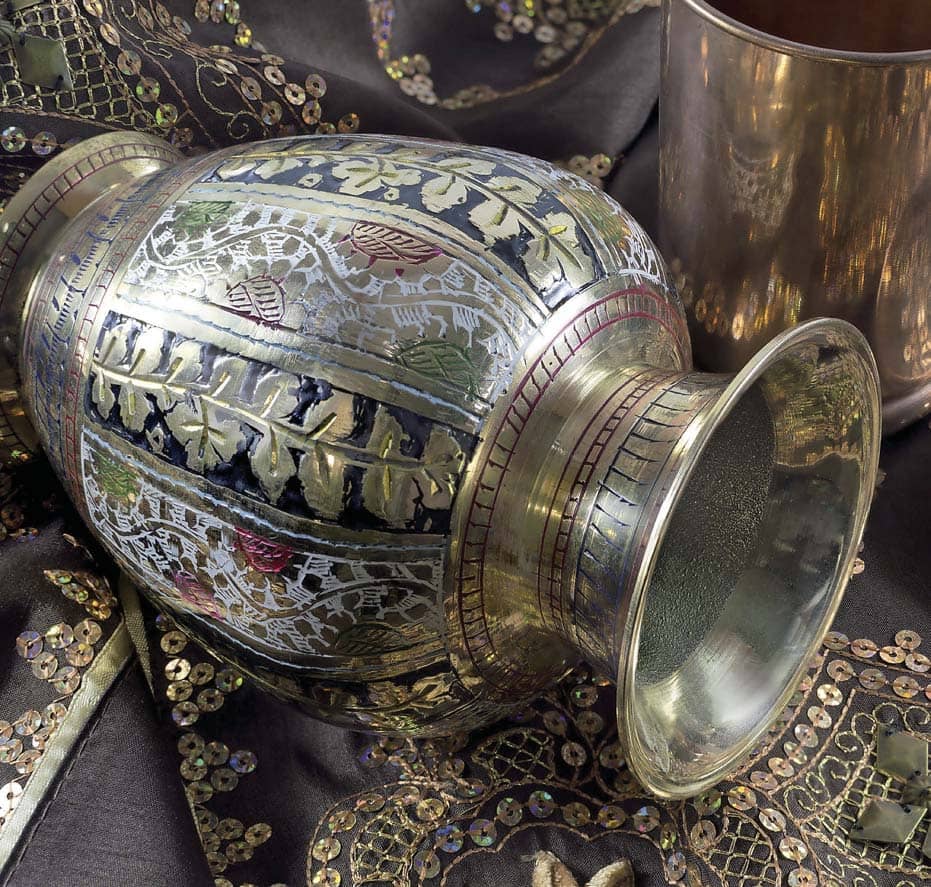 IT WAS A PRETTY VASE – or an ugly vase, depending on your taste for these things. It had fragments of coloured glass stuck to it in a random pattern, and she wondered what had been broken to produce these odd shapes. As Gloria circled the vase, she recognised a willow tree pattern, a gold rim, a fish’s tail. Where had these pieces come from – a discarded plate, a teacup, a bathroom tile perhaps.

The vase had the distinct semblance of a human form – a neck and pinched-in waist, handles for arms, and a perfectly rounded belly. It was like Gloria was working it out, appreciating the skill and assembly, but at the same time, not liking it, really not liking it.

It presented her with a quandary. Should she display the vase based on the skill in its making, or on its visual appeal? To her, the vase didn’t seem to have either of these qualities. However, a third option entered her mind: her friendship for the couple who gave it. She really should display the vase – it was after all a gift, but where on earth could she put it where it wouldn’t be too obvious?

As she was pondering the vase’s future, her husband staggered down the stairs. The clatter of saucepans and the chink of crockery had woken him. Why doesn’t she just leave it, there’s all day to do it! It had been a long evening, the wine had flowed, and his head hurt. Gloria had excelled with the food, as usual. He must remember to say something, compliment her.

Giles poured himself a glass of water and sat at the kitchen table.

Gloria looked round from the sink. “Hello darling, how’s your head?”

Then Giles saw the object of his wife’s concern sitting on a crumpled square of wrapping paper.

“What a hideous vase.”

“It’s from Polly and Sam, I opened it this morning – thought that was safest.”

“Hmmm. I’m sure I’ve seen it somewhere – I know, it was in the raffle at that fete we went to in the village. They must have won it,” he sniffed.

“Well I think it was thoughtful of them, Giles – it’s a house-move type of gift. They must have thought it appropriate and that’s why they’ve given it to us. Actually, I think it might grow on me. If you look closely it’s like you can see a person.”

Gloria recognised this as a lack of any further interest in the vase, and so she took it into the dining room, out of sight. She’d live with it for a bit.

The only trouble was that the more she looked at the vase, the more it seemed to develop human features. The eyes for example. These were formed by two stones, one blue, one green, placed a nose width apart. They followed her around while she was hoovering. Then, one day, a mouth appeared, a mouth formed by a saucer rim. Unfortunately, it had been turned sunny side down, which made her feel miserable. She hid the vase behind a plant, but she knew it was there, which made its presence even more ominous.

MORE STORIES FROM LET'S TALKView All