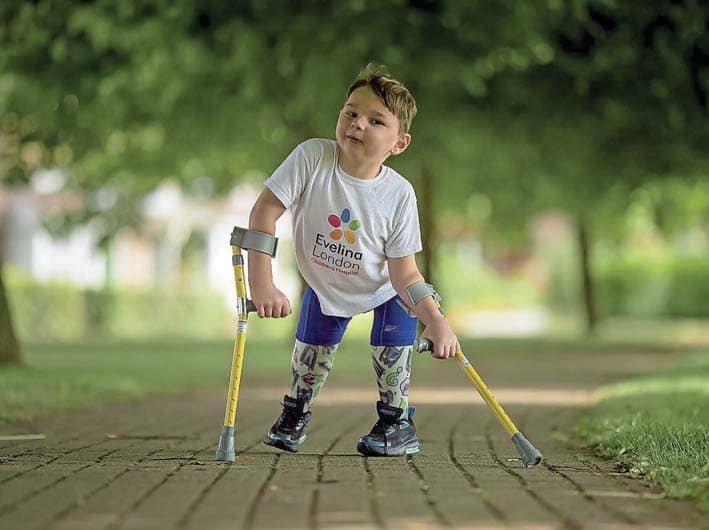 A determined five-year-old from Kent who set out to raise £500 for the hospital that saved his life raised more than £1m in just a month. Tony Hudgell, from West Malling, challenged himself to walk 10km over the course of 30 days on his new prosthetic legs.

Tony had to have both legs amputated in 2017 due to injuries he suffered as a baby, but despite being able to take only a few steps just before starting his fundraising challenge, he not only completed it but exceeded his target by walking more than 12.5km in total – and raising an astonishing £1.272m at the time of writing.

Tony’s parents Paula and Mark Hudgell, who adopted him when he was a baby, were joined at the finish by friends, family and Evelina London staff who look after Tony.

Paula said: “Tony is such a strong and determined boy and we are so proud. We’d like to thank everyone who has been so generous in supporting his fundraising; we couldn’t be happier that the money is going to a place that is so special to our family.”

Tony was inspired to take on the challenge after seeing fellow fundraiser Sir Captain Tom Moore on TV and was thrilled to receive a video message from Captain Tom himself, congratulating him on his achievement.

Caroline Gormley, Associate Director of Fundraising at Evelina London, said: “It was a joy to see Tony take the final steps of his challenge with a cheeky smile on his face.