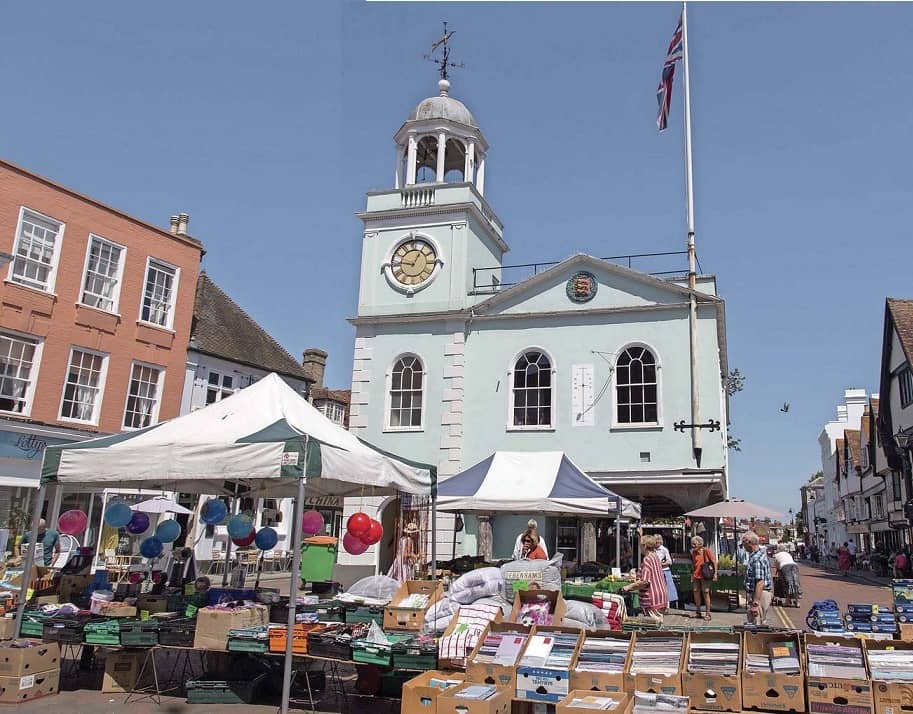 This area was such a favourite of King Stephen that he and his wife Matilda of Boulogne founded a great abbey here in 1148. The small settlement grew into a town and it remained so close to their hearts that both the royal couple and their eldest son Eustace were eventually buried in a vault within the abbey itself. It was destroyed in 1538, during the Dissolution, and their bones were said to have been thrown into the creek.

The heart of town is lined with Tudor and Georgian buildings, around 400 of which are listed, and it has one of the largest conservation areas in the country. Look out for the Guildhall, an Elizabethan building which sits up on stilts in Market Square. Market stalls operated beneath it for hundreds of years. The ruins of the abbey itself are long gone but two barns that were part of Abbey Farm remain – Minor Barn was built around 1425 and the larger Major Barn dates from 1476. Next to the barns is the Abbey Farmhouse, part of which dates from the 14th century.

Kent has plenty of seaside and riverside towns but Faversham is unusually set on a pretty creek. Inland from the Swale – the strip of sea separating Kent from the Isle of Sheppey – there’s a lovely walk from the town along this winding creek through marshes to the sea. On your way you’ll pass Standard Quay and its striking warehouses, now home to many small businesses, and past boat yards and moorings. The creek was once navigable by large ships and barges, which docked in the town to load and unload valuable cargos. These days it’s silted up considerably, allowing only the smaller craft.