It Breaking A Silence 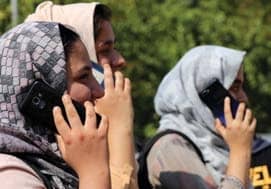 Barely four days ahead of the platinum jubilee of the communication lockdown, when the phones returned to life, not every call was a happy talk

October 14, was an interestingly different day in Kashmir. At noon, when almost four million phones broke their 71-days long silence, people talked to each other in disbelief. An emotionally surcharged man in Kupwara broke down while talking to his daughter, married and settled in Srinagar: “I was worried if at all you had anything to eat!”

But the worst was the Facebook post that a former journalist Irfan Rashid, now coaching in Delhi for IAS, who announced his friend Basra’s death. “Dialled her (Basra’s) number after 70 days with all the energy, strangeness, eagerness, but above all with love. It was 3pm. A different voice answered from the other side. I understood it is her mom. I said salaam to aunty and enquired about Basra,” he wrote. “I assumed phone network is weak that is why aunty didn’t hear what I said. The moment I repeated my sentence, she bursted (sic) into tears, sobbing like a child, crazy like a lunatic, tears flowing with cries. Basra is dead. Today is her 40th day.”

It was such a vital occasion that every media organization of any substance across the globe reported the partial undoing of the communication blockade. The Hindu ran a special story from Kozhikode wherefrom more than 100 Kashmiri students enrolled in Markaz Higher Secondary School talked to their parents for the first time in 72 days. “One of the teachers at the school lent them a phone, and the students took turns to contact their beloved ones back home,” the newspaper reported. “None of them was able to talk to their parents during Eid Ul Azha either. And, they were consoled by their friends at school.”

Since 2004, when Kashmir Chief Minister Mufti Syed and Markaz Chancellor Kanthapuram A P Aboobacker Musaliyar inked an agreement, the number of Kashmiri students is increasing with every passing year.

Kumud Jenamani reported in The Telegraph the telephonic communication of shawl traders in Jamshedpur with their families in Kashmir. “I was anxiously trying to connect with my family in Srinagar from my postpaid Jio service since 1pm, “Abdul Rashid, one of the 150 shawl sellers in the region was quoted saying. “Finally, my cell-phone rang around 1.30pm with my wife at the other end. I was much relieved having talked to her for a few moments.” Rashid operates from Dhatkidih in Bistupur.

“Just before noon on Monday, Athar Rather’s phone rang in New Delhi. On the other end was a voice he hadn’t heard in weeks: his younger sister Rizwana in Kashmir,” The Washington Post reported from Delhi. “The siblings choked back tears, overcome by the simple act of being able to reach each other.”