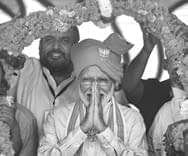 Kashmir may not have any election anytime soon. But BJP made the abrogation of Article 370 and Kashmir such a powerful issue during election campaign in Haryana and Maharashtra that even Congress fell in line

In Haryana and Maharashtra, the two states going to polls on October 21, non-BJP parties are frustrated as BJP elevated Article 370 abrogation as the main poll plank. BJP’s top leadership including Prime Minister Narendra Modi and Home Minister Amit Shah are not talking anything other than this. To price hike, low growth rate and lack of jobs, there is only one response - Article 370.

In Ballabgarh (Harayana), Prime Minister Modi attributed soldier killings to Congress’s love for Article 370. “The brave jawan of Haryana who was protecting innocent citizens of J&K, who fell to bullets of terrorists…,” he said. “When his body came back wrapped in the tricolour, ask those mothers how many sons of the soil lost lives because of your love for Article 370?”

“These people (read Congress) are raising questions over this decision, going abroad and asking for help. I challenge them to go to the people of Haryana and tell them that if you win, you will bring 370 back... Go from village to village in Haryana and explain its benefit to people, to mothers who lost their sons in Kashmir, ask them how many sons have been killed due to your affection for (Article) 370.”