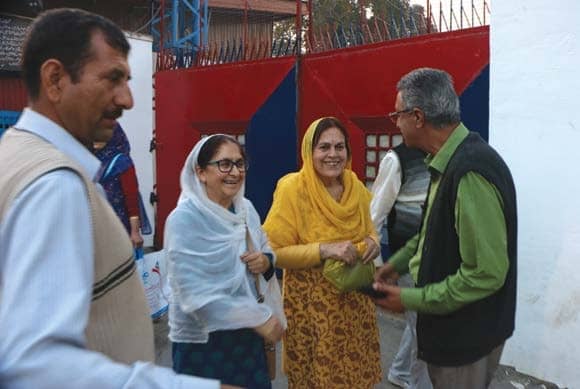 A group of 13 women who planned the first protest against August 5 decisions spent almost 30 hours in jail and were set free after they signed a bond that they will not breach peace again,

These days history is literally in complete reversal. In 1947, probably the first IAF aircraft carrying the soldiers to Srinagar to push back Pakistani intruders flew two Kashmiri women to Delhi. Wearing white shuttlecock Burkha, the two women were said to be Begum Akbar Jehan, the wife of Kashmir’s towering leader, Sheikh Mohammad Abdullah, and their daughter Khalida Shah. They were f lown to Delhi to protect them from any harm in the explosive situation that existed in Kashmir at the time of the accession.

In 2019, when the entire constitutional arrangement that was the outcome of the 1947 process was binned by a new law that the bicameral Parliament passed in the first week of August, the first ever symbolic protest came 73 days after, when a group of 13 women came with placards and wanted to have a “peaceful sit-in” on the Moulana Azad Road. Within minutes, they became the first female detainees of the ongoing crisis. Among others, these included Sheikh Abdullah’s daughter, Dr Suraya Matoo and his granddaughter, Safiya Khan.

Suraya is Dr Farooq’s sister, and Safiya his daughter. He along with his son Omar are already in jail and are being held separately. Unlike Omar, Dr Farooq is formally detained under Jammu and Kashmir Public Safety Act.

Police attempted preventing the women from distributing a brief statement to the media. “We the women of Kashmir disapprove the unilateral decision taken by the government of India to revoke Article 370, 35A and downgrade and split the state of Jammu and Kashmir,” the statement said. They demanded restoration of “civil liberties and fundamental rights” of the citizens, and slammed a section of the media for “their false/misleading coverage” of Kashmir.

They were bundled into two armoured police vehicles by a posse of female CRPF personnel and rushed to the police station Kothibagh. There, they were told they stand arrested for violating Section 144 CrPC, barring assembly of more than four persons. They were booked under Section 107 CrPC for “breaching the peace”.