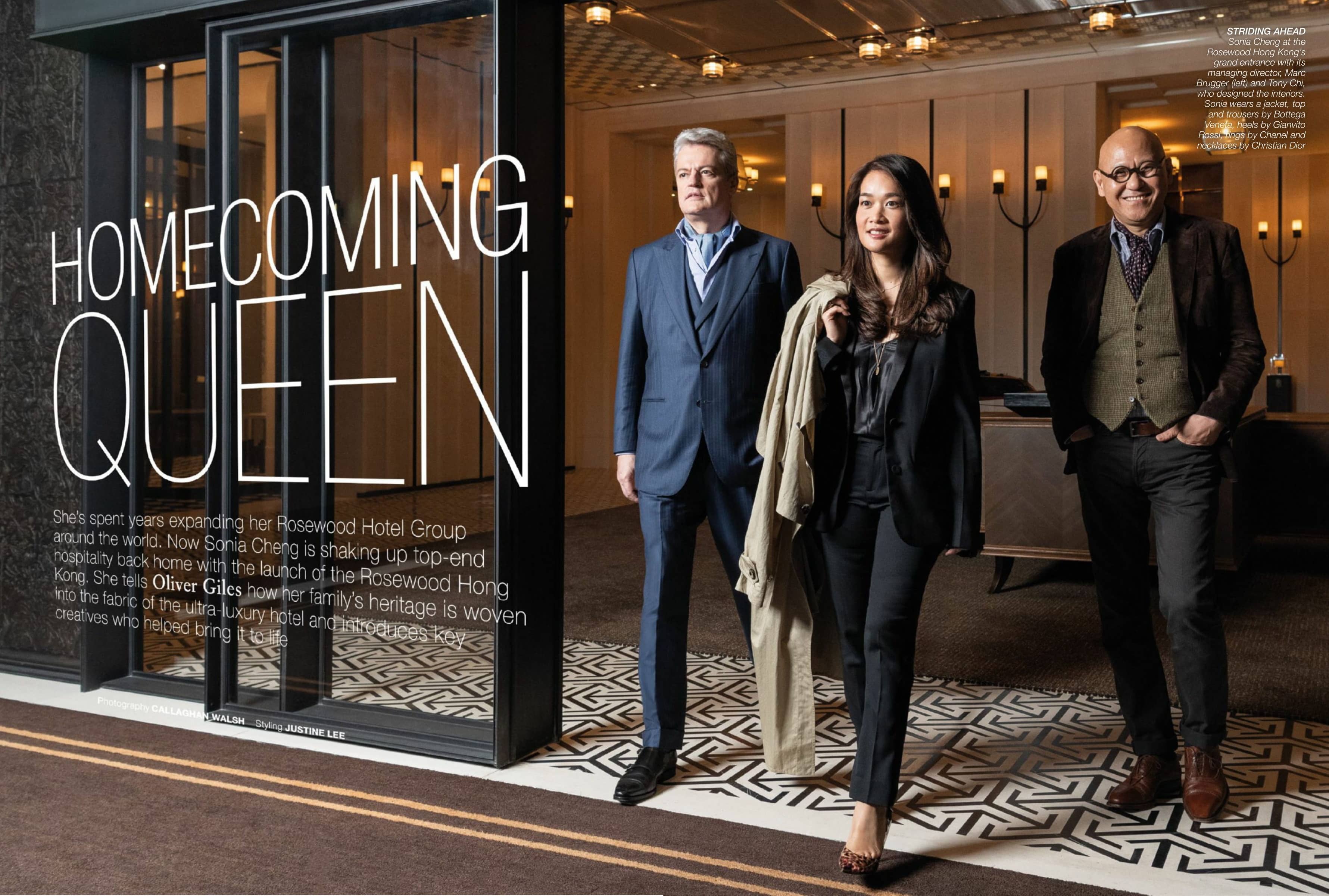 She's spent years expanding her Rosewood Hotel Group around the world. Now Soria Cherg is shaking up top-end hospitality back home with the launch of the Rosewood Hong Kong. She tens Oliver Giles how her family's heritage is woven into the fabric of the ultra luxury hotel and introduces key creatives who helped bring it yo life.

Everything you see in the new Rosewood Hong Kong has a tale to tell. The entrance of the grand ballroom is framed by intricate leather panels crafted by Atelier Mériguet-Carrère, a Parisian design studio that worked on the restoration of the Hall of Mirrors at Versailles. The walls of guest rooms are wrapped in wool woven by Loro Piana in rural Italy. More than 150 chandeliers, lamps and lanterns were designed for the property by a team in New York. Perhaps the most interesting story, though, is not about luxurious fittings from far-flung corners of the world but about a local family that made its home in Tsim Sha Tsui.

“I grew up on this site,” reveals Sonia Cheng, CEO of the Rosewood Hotel Group, as she looks out over Victoria Harbour from one of the hotel’s suites. “My father and grandfather created the New World Centre here back in the 1980s. There was a shopping mall, a hotel, offices and apartments. We lived in one of the apartments. My father and grandfather were really forward-thinking because Tsim Sha Tsui was not as developed back then but they really turned it into a destination for Hong Kong residents. Lots of Hongkongers have precious memories of the New World Centre. And I share those memories. I remember the arcade in the New World Centre; I remember eating in the coffee shop; I learned to ride a bike along the harbourfront just outside.”

Sonia’s father, Henry Cheng, has similarly fond memories. “New World Centre was the dream of my father, and my dream,” recalls Henry, chairman and executive director of New World Development. “I remember when it opened, the whole area panicked because it was the first time a large-scale shopping mall was completed in Hong Kong and it was the only one in Southeast Asia I think. It was stunning, and we were very successful at building a landmark there, but after 30 years everything is outdated, so we wanted to redo it.”

Henry envisioned turning the site into a world-class art and design district, but he knew it had to be anchored by something special. “We wanted to build something outstanding,” he says. “And after I purchased Rosewood in 2011 I knew I wanted to build a Rosewood in Hong Kong and for it to become the flagship property. We want to promote Rosewood through this flagship to become number one, the best hotel brand in the world.”

Now, eight years after setting that goal, Rosewood Hong Kong is a reality. The hotel occupies 43 floors of an imposing 65-storey tower designed by New York-based architectural firm Kohn Pedersen Fox, which also oversaw the rejuvenation of the whole district, christened by the Chengs as Victoria Dockside. Inside the tower, renowned American interior designer Tony Chi worked his magic. “This is a very meaningful project for me and my family, but we have a very talented team,” says Sonia. “This hotel is a collaborative effort.” 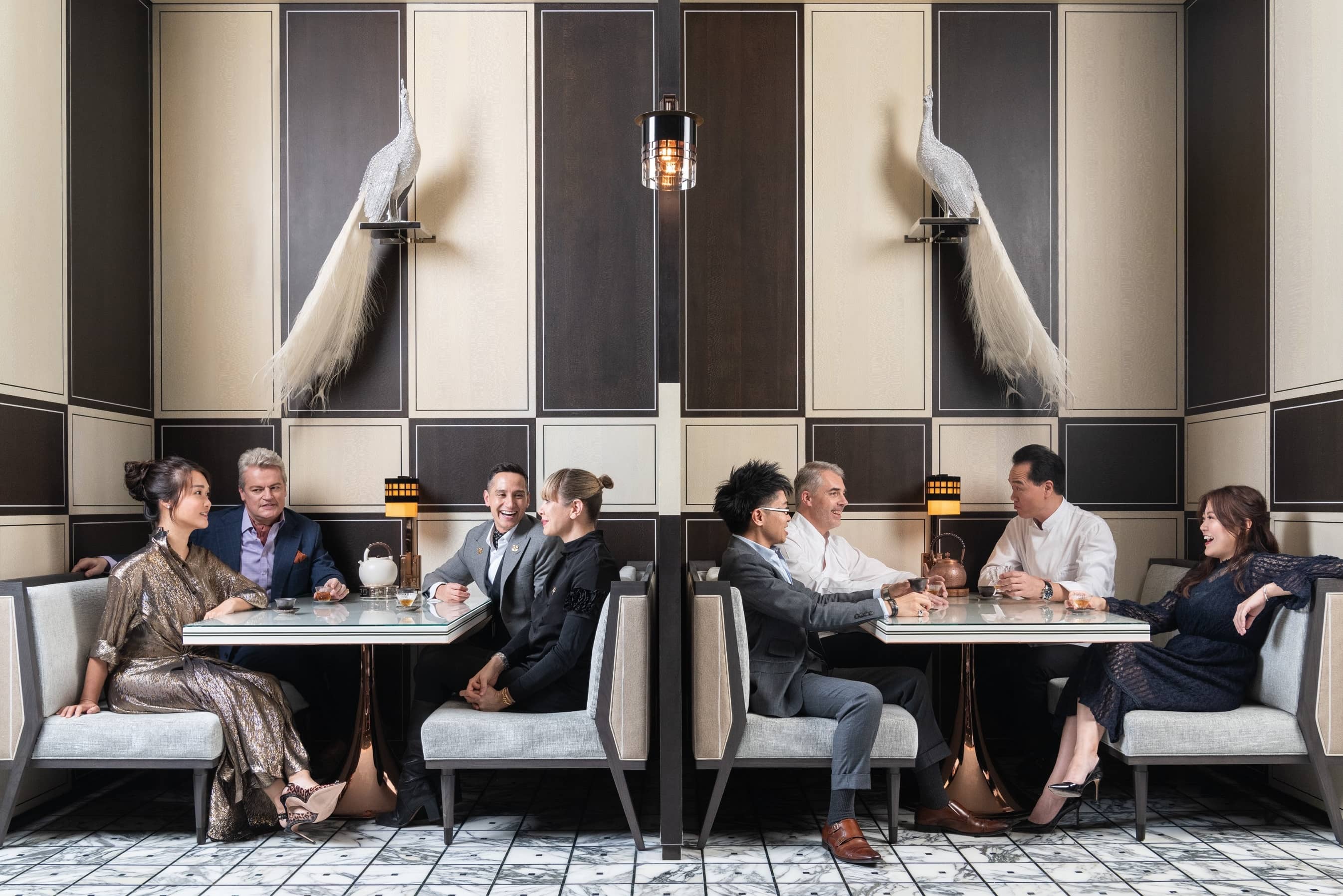 New York-based Tony was a natural choice for the interiors. Sonia and Henry had him design the Rosewood London— which effortlessly blends British heritage, contemporary design and a collection of quirky curios—and he’s currently renovating

The Carlyle, a Rosewood hotel, in New York. But long before they ever collaborated on professional projects, Henry commissioned Tony to oversee a much more personal space: his home. “I’ve probably known Tony for more than 20 years, since he designed the family home,” recalls Sonia. “He’s a dear friend of the family.”