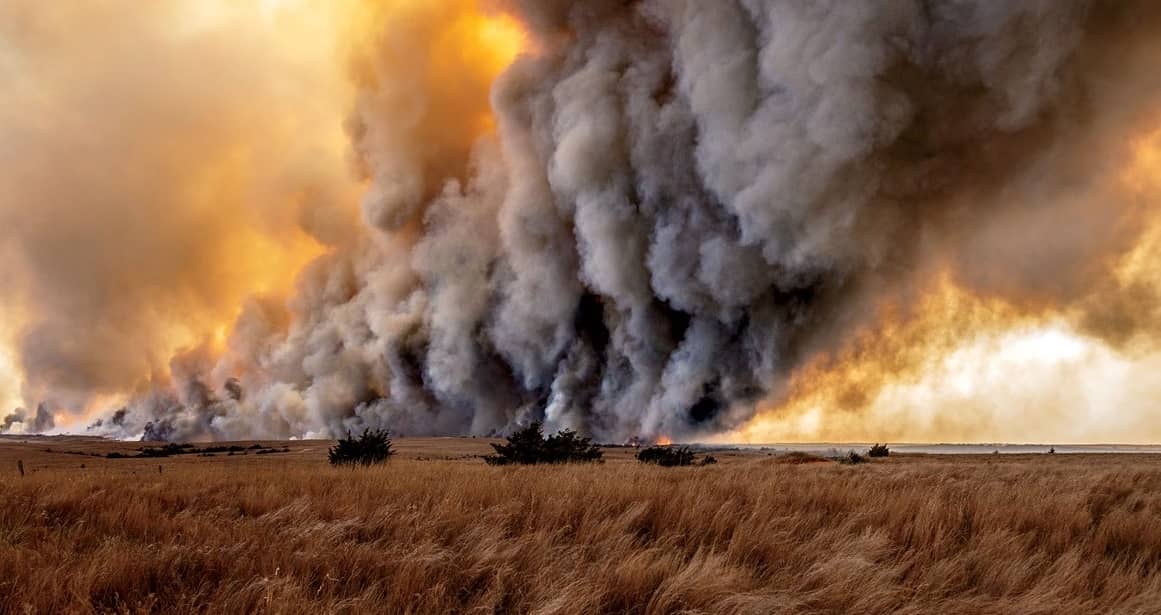 ON THE PLAINS OF NORTH-west Oklahoma, you can see for miles: nothing but prairie grass, clumps of cedar trees and rugged red-rock canyons. But even with my binoculars, I could barely make out the helicopters, one after the other, dumping water on a wildfire at the horizon. I wasn’t concerned by the small plume of smoke snaking skyward. It had to be at least 50 miles away, across the South Canadian River even.

That afternoon, my uncle Larry and cousin Tony and I had driven to this 4,000-acre ranch for a planned three days of turkey hunting. Larry had brought three horses for us to use, moseying about the ranch like real cowpokes. At age 57, I was semiretired from a career in retail management. It felt great to get away for some male bonding.

I snapped a few pictures of the bushy cedars, the canyon rims—nothing but blue skies above—and texted them to my wife, Ande, two hours away. “Nothing to worry about,” I typed. “Having a great time.” She’d seen the fire on the news and called a few minutes earlier to warn me, but we’d lost the cell connection. I didn’t want her fretting. I knew she’d be praying regardless. All that talking-to-God stuff came harder for me. It was hard to imagine him actually listening to anything I’d have to say.

The wind had picked up, blowing hard from the southwest. We left the horses in the stable by the ranch house and climbed into a Gator utility vehicle, Larry driving, to scout for places to draw out the gobblers the next day. We headed north on a small gravel road that hugged the ranch perimeter. We stopped here and there to look for signs of turkeys.

We drove for about a mile before Larry turned to head back south, toward the ranch house. As we did, my eyes went wide. A wall of flames was racing toward us, maybe three quarters of a mile away. “Get us out of here!” I screamed. Larry whipped around, bouncing hard over the gravel road. How had the fire jumped the river? To cover that kind of ground so fast would have taken tornado-like speed. The flames would be on us in no time.

“What about the horses?”

“What about our trucks?”

“How can we save ourselves?”

We weren’t expecting answers. We were just trying to keep from totally losing it. I looked back. Amazingly, we were gaining on the fire.

Until we ran out of road.

A heavy-duty barbed-wire fence blocked the way. There was no way to get the Gator past it. Larry, Tony and I jumped off and scrambled to the other side. But it hardly mattered. On foot, we were goners. I called Ande.