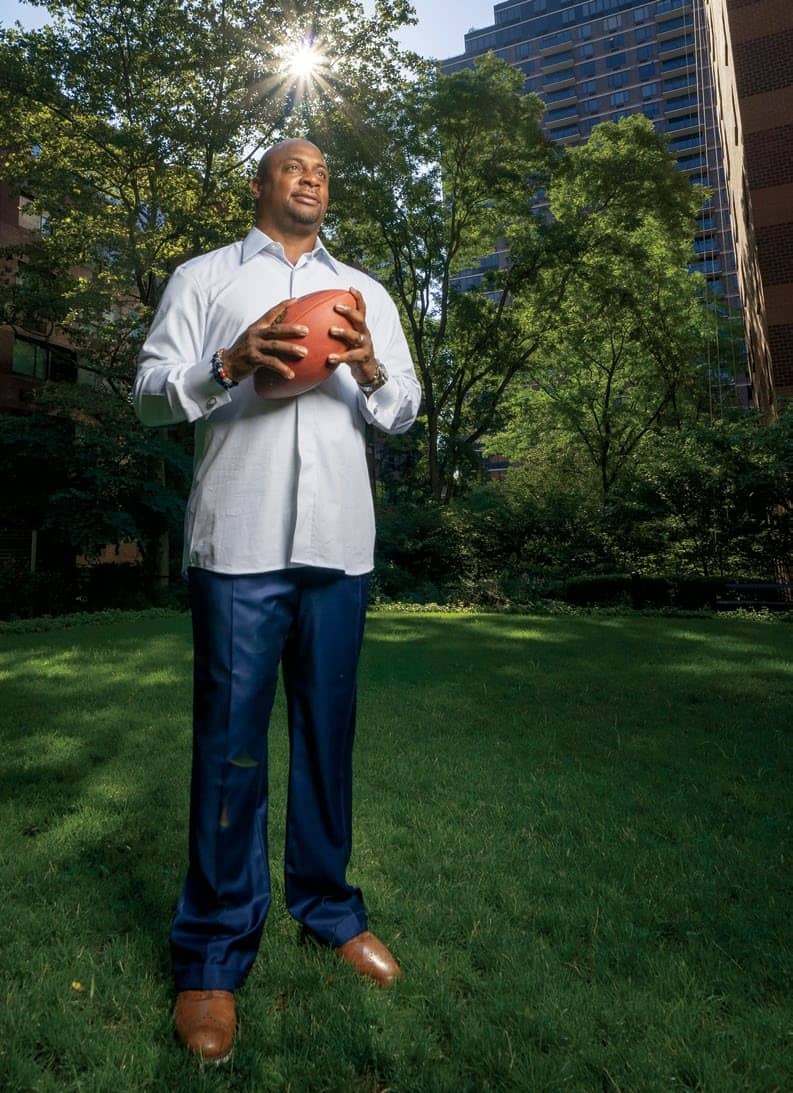 He survived 15 seasons playing pro football. Yet nothing compared to the violence in his home growing up. As an NFL executive, husband and father, he’s committed to…

THE SOUND IS SEARED INTO my memory. Heavy footsteps. Pounding. Screaming. A storm of violence on the other side of my bedroom wall. More heavy footsteps and a slammed door. Eerie silence.

I was just seven years old when my mom’s boyfriend, the father of my younger brother, terrorized our family. He was a jealous, controlling man with a volcanic temper. If another man as much as looked at Mom on the street, she was in for a beating.

My brother and I cowered, terrified. When the storm had passed, I crept through the apartment, eventually finding my mom sprawled unconscious and bloody. I ran into the hall and knocked on neighbors’ doors. No one dared answer. I had to go to the bar next door to call 911 on a payphone.

I grew up to become a star defensive player and a high-ranking executive for the National Football League. During my 15 seasons in the NFL, I played 207 games, intercepted 47 passes and racked up nearly 900 tackles. Yet nothing in my career as a hard-hitting defensive back compares to the violence experienced by my family growing up.

Which is why my life on and off the field has been devoted to combating domestic abuse and promoting the dignity of women and the responsibility of men to end this scourge. How does someone who makes his living in an inherently violent sport fight violence in the home?

The answer to that question encompasses a lifetime, but it can be boiled down to one word: faith. It was God who steered me away from a path followed by many kids who experience domestic violence—becoming an abuser myself. It was God who enabled football to become a transformative force in my life.

And it was God who led me to Tommi, my wife of 26 years and the mother of our five children. Tommi also experienced abuse growing up, and she taught me how to be a tender husband and father. Together we have made campaigning against domestic violence a family mission. Never doubt God’s power to turn tragedy into hope, love and healing.

My mom, Alma, was a good person with an inner reservoir of strength. But she was young when I was born, just 19 years old. She fell prey to domineering men who used violence to compensate for their own insecurities.

Too young to defend her, I did my best to support her. My brother and I nursed her back to health whenever she returned from the hospital, bandaged and in a cast.

Why didn’t she just leave? It’s the age-old question. The answer is complex, but it’s important to remember that many women see no way out.

Some women depend on their abuser financially. Others have been emotionally warped into believing that the violence is their fault. They trust the abuser’s seemingly sincere apology and hope against hope that there won’t be another beating. They fear that if they leave, the abuser will track them down and kill them.