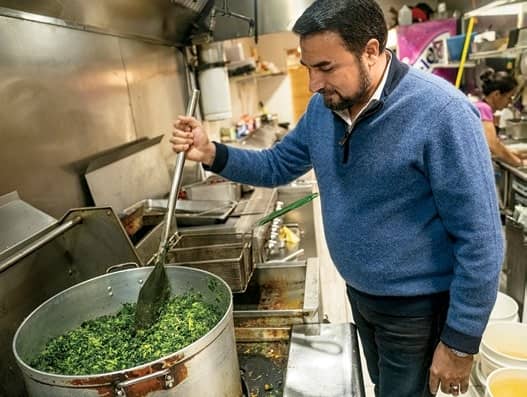 D.C. restaurateur Kazi Mannan practices what he preaches… and it’s changed his life

KAZI MANNAN SITS AT HIS USUAL table in the Sakina Halal Grill, the Pakistani-Indian restaurant he owns in Washington, D.C., a few blocks from the White House. He is just this side of 50, tall and wearing a dark suit. He calls out to a man in a baseball cap headed to the buffet table. “Hey, Derek, how’s it going?”

“The chicken vindaloo is dynamite today,” Derek says. “Going back for some rice pudding. Thanks again, man.”

Kazi smiles and says, “We know all our regulars’ orders by heart.”

Derek is one of a dozen nonpaying customers who’ve come for lunch, most of them homeless. “Family” is how Kazi refers to these customers, who make up about 20 percent of Sakina’s clientele. In the past six years, the restaurant has given away more than 80,000 meals, with many people eating there twice a day. No one is ever turned away for not having money or asked about their circumstances. There’s no judgment, period.

At some tables, those who can’t pay sit side by side with those who can, including White House staffers. Kazi’s philosophy is not just to give away food; learning about one another is equally important. “Food is great magic to bring us together,” he says. His compassion and generosity were inspired by his mother, Sakina, the restaurant’s namesake, who passed away when Kazi was 20. Along with his nine siblings, he was raised Muslim in Pakistan without access to running water or electricity. “Even though we were very poor, my mother gave away so much food to people in our village that I would get angry with her, afraid there wouldn’t be enough for our family. ‘God will make sure there’s plenty left for us too,’ she would say, and she was right. We never went hungry.” 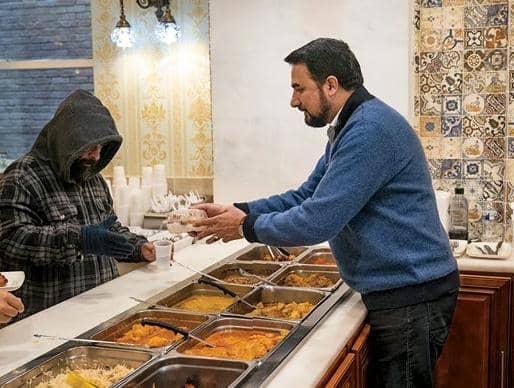