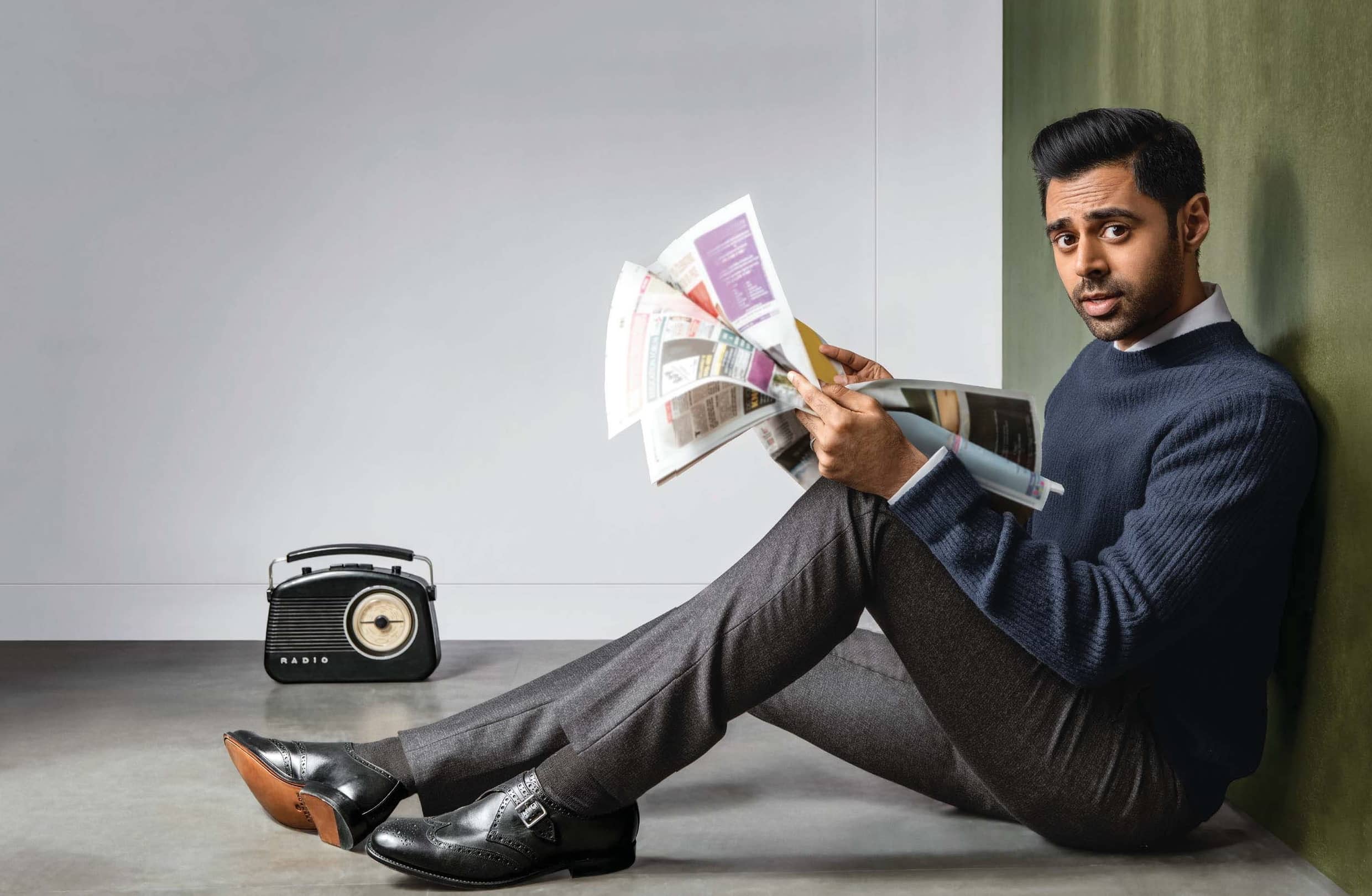 With Patriot Act, Hasan Minhaj jabs pitch-perfect humour at some serious foes – and the crowd roars

Sloane Crosley
HASAN MINHA J DID WELL AT SCHOOL . While this may seem like an arbitrary introduction to the 34-year-old host of Netflix's Patriot Act, one designed to make him cringe – it is – it’s also one of the most salient points about him.

FIRST OF ALL, he brings it up all the time. He brought it up when he was a correspondent for The Daily Show. He brought it up in his Peabody Award-winning stand-up special, Homecoming King (‘not good for an Indian kid!’). He brought it up on the inaugural episode of Patriot Act, a show that received an unprecedented 32-episode order before it aired. He’s in on the self-infantilising nature of the joke, of the ridiculousness of holding on to suburban disappointments, but therein lies the core of Hasan Minhaj. ‘When I was developing Homecoming King, we had some really heated conversations where my cocreator was like, “Dude, come on, your first love didn’t want to go to matric dance with you. Your spine isn’t getting shattered in the back of a police car.” But I pushed back. Why does the collateral damage always have to be death for the story to be valid? Why does our story have to be steeped in poverty or porn for it to matter?’

He continues down a familiar path, widening his eyes, which are already puppy-dog-like, even when he’s not being sarcastic.

‘Oh, my name’s Hasan Minhaj. I grew up in the gullies of Mumbai and never thought I’d make it to America,’ he mocks. ‘Like, we can’t get Lena Dunham freedom? We can’t just say “Dating’s hard”.’

We’re standing in front of a three-metre inflatable red jug (‘This is the OG bidet,’ Minhaj explains. ‘We’ve been on toilet hygiene for a minute.’) that reads “SHIT HAPPENS!” It’s the opening day of artist Maria Qamar’s first solo exhibition in New York. Qamar, a Pakistani-Canadian artist (aka @hatecopy), came to Minhaj’s attention via “brown Twitter”, he says; Mindy Kaling has featured her work on sets as well as on a personal greetings card. Much of Qamar’s work is inspired by Indian soap opera heroines, and the effect is that of a subversive Lichtenstein. It’s easy to see why Minhaj feels a kinship. While you’re busy appreciating how stylish it is, the political soul of it comes straight for you. In one painting, a woman slaps Trump across the face as she shouts “Bidaai!”, which means “Fix yourself!” more or less.

‘What I like most about her work is that it puts brown female leads front and centre. She just goes for it,’ says Minhaj. ‘There’s a lot of brown dudes out there right now – we’re taking up a lot of space.’

He has a point, albeit one that somewhat undermines his previous point. With increased representation comes diverse preoccupations. One thing you can say about, say, Aziz Ansari is, that guy has made a career out of “Dating’s hard”. But the expectations for Minhaj are different. He started as a stand-up, but broke out as a satirist on Jon Stewart’s Daily Show, doing segments on the Muslim ban and equal pay in women’s soccer. To seal the deal, he played the notoriously tough ballroom of the White House Correspondents’ Dinner in 2017, months after Trump took office. ‘Nobody wanted it,’ says Minhaj of the job. But his friend, the comedian John Mulaney, was moved by the reality of the thing – Minhaj, the son of Muslim-American immigrants, ‘was going to make fun of the biggest worst sonofabitch that ever got to be president’.

Now, with Patriot Act in its fourth season, Minhaj does ‘woke TED Talks’, or what he describes to me as ‘more storytelling in the same vein as Colin Quinn or Mike Birbiglia’. This means the comedy about his personal life – he and his wife and varsity sweetheart, Beena Patel, recently welcomed a baby girl – has faded to the background. Not that it was ever particularly pronounced. ‘I respect the privacy of the people who I love,’ he says, ‘and they didn’t sign up for this.’ And he means it. Lots of celebrities won’t post pictures of their kids’ faces on social media, but Minhaj asks that his daughter’s name be kept out of the spotlight. Instead, he chooses to talk about his youth. Thus, by rooting personal details in the past, Minhaj can trick an audience into thinking he’s sharing more of his current self than he actually is.