The Legend Of Keanu Reeves 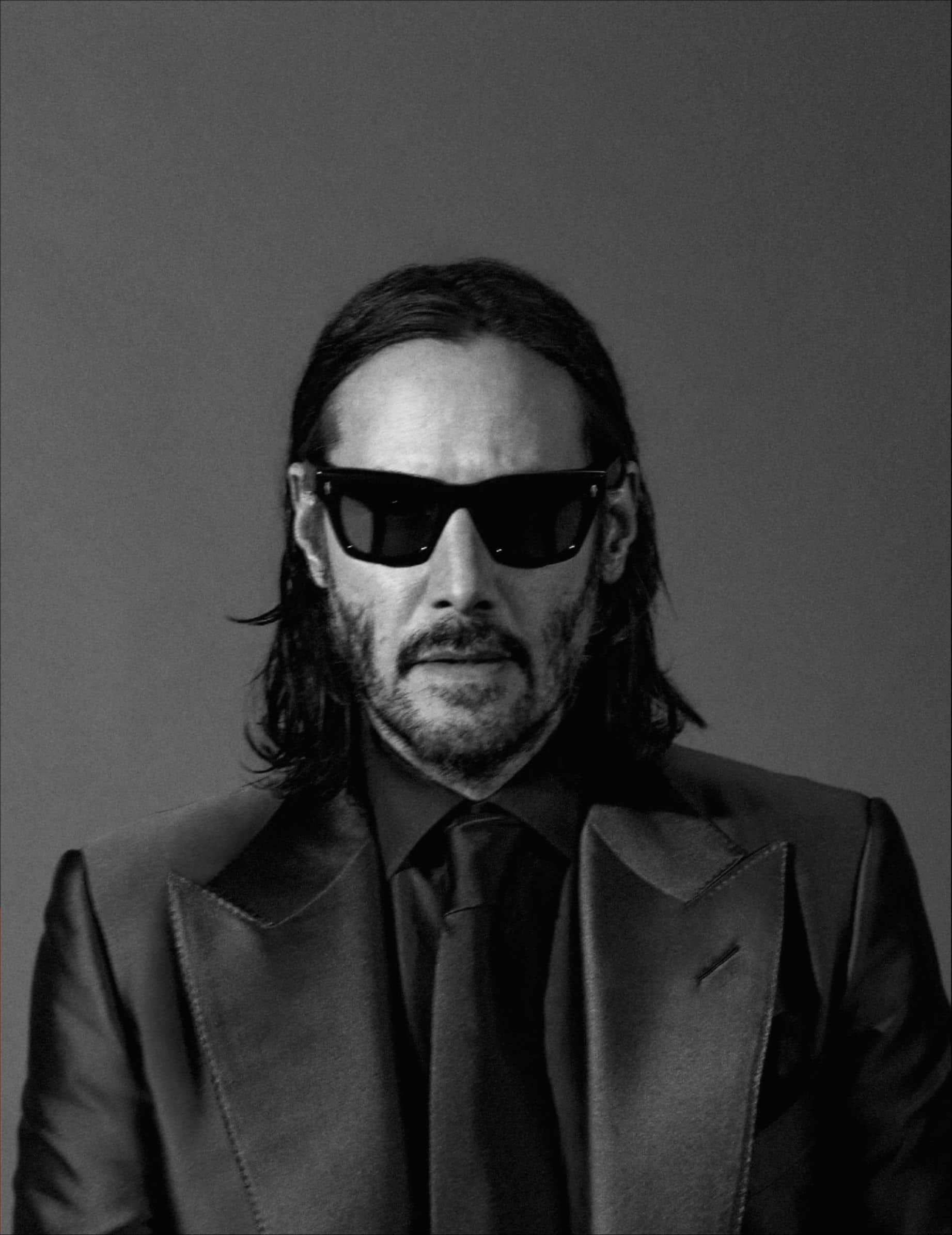 With John Wick – the third instalment of which came out last month – Hollywood’s most enigmatic leading man once again established himself as a bona fide action star. But who is he, really? We sit down with the immortal Keanu Reeves in an attempt to separate the man from the myth.

Here, before you’re quite ready for him, is Keanu Reeves: At the top of the driveway of the Chateau Marmont in West Hollywood, smoking a cigarette on a low couch, like he’s on his front porch.

He’s been coming here since the early 1990s. The Chateau was rundown and empty then – a seedier, pre-André Balazs version of itself. The faucets didn’t always work. The carpets were dicey. “You didn’t want to take your shoes off,” Reeves says.

He basically moved in for a while there. Could be found splashing in the pool with the likes of Sharon Stone or hiding in a corner “playing chess with his computer and smoking compulsively to fight stress”, depending which tabloid tall tale you bought.

Now he lives in a house, not far from here, up in the Hills. He’s owned it for about 12 years. Sometimes he sits up there and wonders if it’s the house he’s going to die in. It’s not a preoccupation – he’s just curious if this is going to be it, this place in the Hills. “I didn’t think about that,” he says, “when I was 40.” 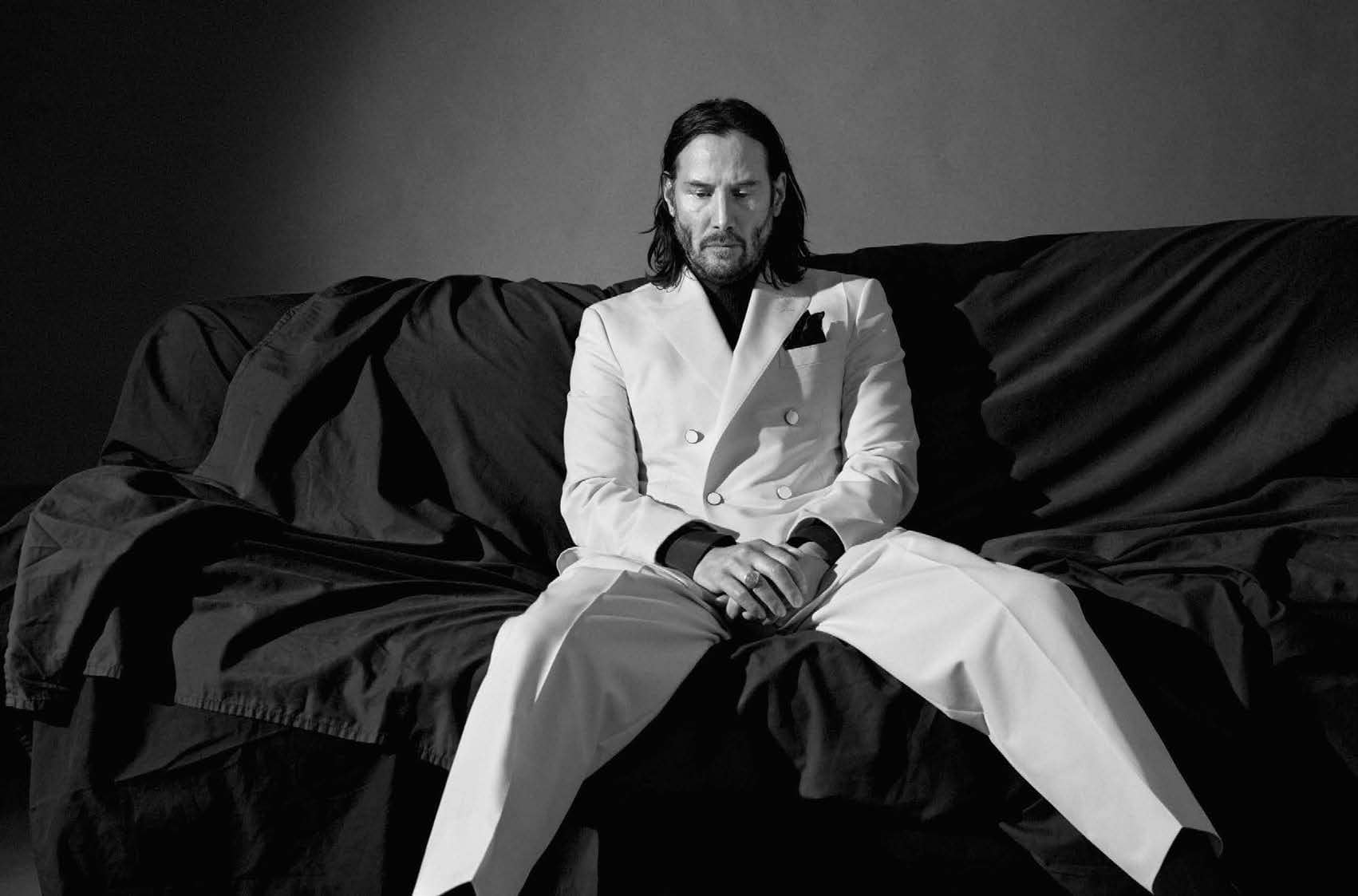 He’s shown to a semi-private corner in the garden. Chairs around a mirrored coffee table. A wet Monday morning has given way to a cold Monday afternoon. It’s early February and the No 15 rap song in America is “Keanu Reeves”, by Logic, who was one year old when Point Break came out in 1991.

Today, the real Keanu Reeves has that same patchy beard. That same curtain of hair falling into his eyes. He’s wearing those same chunky Merrell hiking boots he was wearing pretty much regardless of context long before normcore made The New York Times.

You have to look close at the gray flyaways in his eyebrows to remember what year it is.

He’s 54 and getting over a cold. His cough sounds like somebody punching their way out of a paper grocery bag. He zips his shaggy black fleece up to the neck. But then a Chateau guy wheels over a heat lamp for Keanu. Another Chateau guy wheels over another heat lamp for the other side of the table. Then the sun comes out, as if it, too, wants to make sure Keanu is warm enough. The sun bounces off the tabletop and up into Keanu’s face. It’s a nice, low fill light. 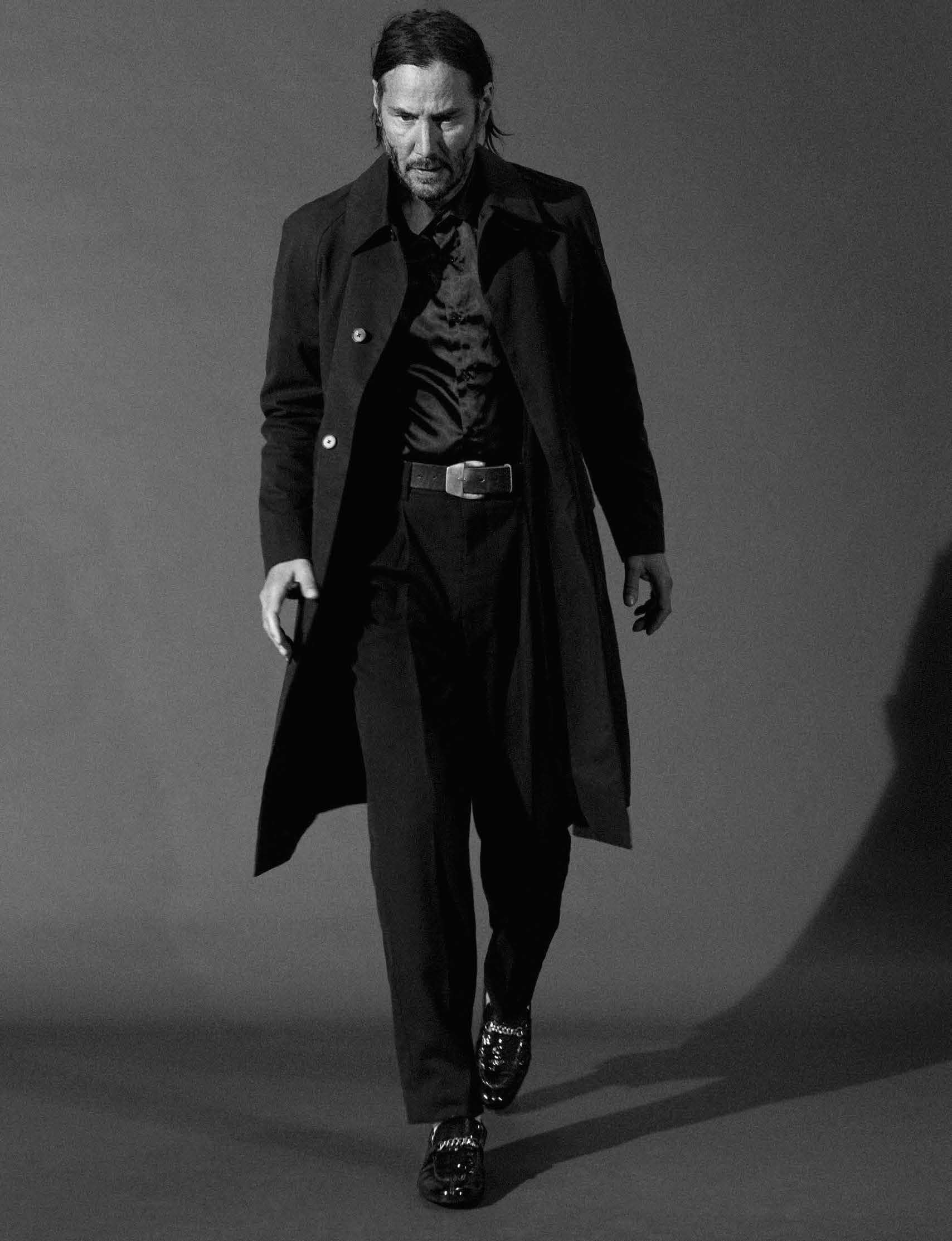 Keanu orders a BLT and a Coca-Cola. Fries, not salad. When it comes, the BLT, it’ll be on ciabatta bread. Keanu will find himself missing the crispness of toast. Keanu isn’t sure a BLT shouldn’t leave your soft palate ground up a little. That a BLT shouldn’t have consequences. Soft bread is for soft-bread sandwiches. “Peanut butter and jelly,” Keanu says. Then, more dreamily, like Homer Simpson in reverie: “Peanut butter and honey.”

In his latest movie, Reeves again plays John Wick, a widowed master assassin and warrior with a broken heart. The first John Wick was shot for $20 million, without real expectations, by Reeves’ old Matrix stunt double Chad Stahelski and Stahelski’s co-director, David Leitch, who had been long-time stunt coordinators and second-unit directors but had never directed a feature before. And even with Reeves attached, the first Wick was not exactly a hot property at first.

“You have this over-the-hill assassin whose wife dies of natural causes, gives him a puppy, some Russian punk kills his puppy and he kills 84 people,” Stahelski says. “How many studios do you think said no to that picture? The answer is all of them.”

Stahelski spent years doubling Reeves on three Matrix movies and knew exactly what he was capable of. “I don’t know anyone that puts more into the game, collaboratively, physically, intellectually,” he says. “I’ve never experienced anyone that could have survived [The Matrix]. It just took a different type of person. To be open to that. To allow yourself to be constantly soaking wet, sore, tired, beaten up, for years.”

“Now fast-forward to 20 years later,” Stahelski says, “and you’ve got your former stunt double directing you. So he knows what you’re capable of. And his expectations are even more psychotic than the last decade-and-a-half of directors you’ve worked for. I can say, I know you have more. Don’t lie to me. Get up. And Keanu, 20 years later, is holding that up! That’s not just physical. That’s mental. That’s a certain kind of mental fortitude.”

Fight movie fans hailed the first Wick’s use of long takes and close-up martial arts action as a bold stylistic throwback – anti-Bourne, a little bit antiMatrix, even. And it was that. Reeves and Leitch and Stahelski wanted the audience to trust what they were seeing, so they didn’t have John do anything that Keanu couldn’t do. But there was another reason they staged the action the way they did.

“We had no choice,” Stahelski says happily. “We had no money. We couldn’t afford all the fancy editing and fancy camerawork. The long takes, the close quarters gun stuff – yes, those were ideas we had. But we couldn’t afford to do long takes. We had to do long takes because we only had one camera. The first guy who dies [in a fight scene] is also the last guy – he’s gotta get up, run behind the camera and come back into the shot and get hit by Keanu [again].”

The Wick films have since become a $140 million franchise, something that no one, including the people involved with them, can quite believe. Starz is making a TV series set in the John Wick universe, further leveraging the series’ elaborately detailed underworld-building.

Meanwhile, John WICK: Chapter 3 – Parabellum, finds John excommunicado – assassins’ guild parlance for CANCELLED – and on the run from a $14 million bounty after killing a guy in a no-killing zone. But the true stakes are the same as they’ve always been. John’s psychic struggle is what Reeves loves about these ludicrous, gun-crazy movies.

“He’s got this beautiful, tragic conundrum – these two selves,” says Reeves. “The John who was married, and John Wick, the assassin. John wants to be free. But the only way he knows how is through John Wick. And John Wick keeps fucking killing people and breaking rules. We’re really watching a person fight for their life and their soul.”

Plus in this one, he rides around the streets of New York on a fucking horse. Leaked images and videos from the day he shot this scene had half the internet screaming at John Wick: Chapter 3 to just take their money. Not since Eadweard Muybridge filmed one in the 1870s has a moving picture of a guy riding a horse made people so excited.

“Somebody took that picture while we were shooting in Brooklyn and released it,” Stahelski says. “I thought it was cool. Keanu thought it was cool. I don’t think the studio thought it was cool. I’m a big Sergio Leone fan, so no matter what, I was putting Keanu on a horse in this movie. If you’ve got an actor who can ride horses, ride motorcycles, do fight scenes, why not? I made a list of every skill Keanu has – we sat down and I said, Give me everything you can do really well. And we put all that in the movies. Drive a car, check the box. Ride a horse, check the box. Nobody wanted horses. I had to fight for that one. People thought it was too weird.”

Horseback Keanu became a meme, one of many Keanu’s images has inspired. Sad Keanu, Conspiracy Keanu – Reeves’s internet avatars, who go out and play on social media while the real Reeves sits at home with a book or something. He regards his own meme-ification from a disinterested distance. Actually participating further in the process is not for him, but he’s also not judging anybody who does play along. “People doing dances, people doing mannequin stuff or whatever – those people, they look like they’re having fun and doing some cool shit,” he says politely. To actively seek further meme-ification – hey, it’s Sadder Keanu – wouldn’t feel like a creative act, he doesn’t think. 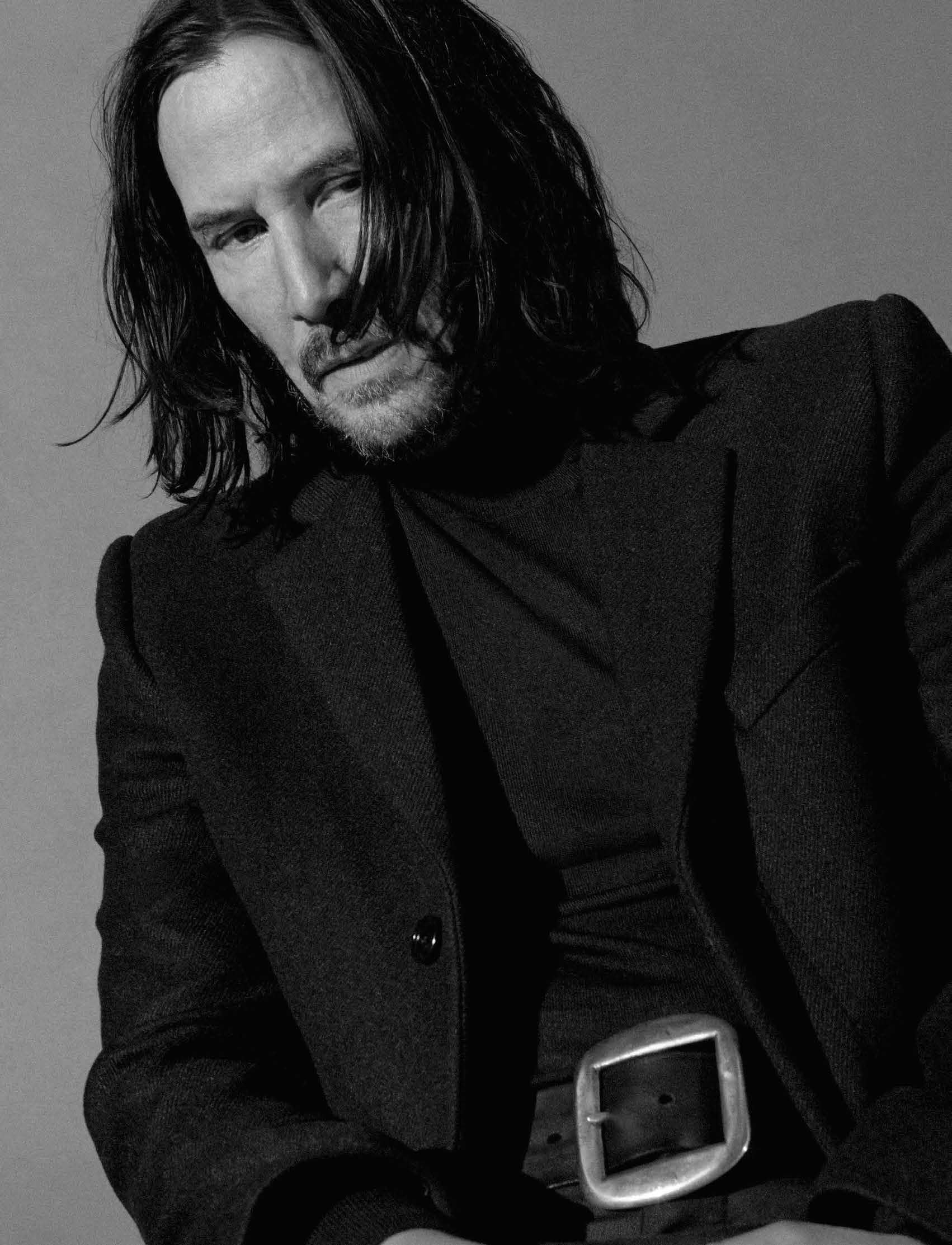 Which of course makes him a perfect meme subject: He will never upset the precise balance of affection and irony critical to the life of a meme by announcing himself as being in on the joke, like Richard Marx or the official Twitter presence of Steak-umm brand sandwiches.

But in late March, a few weeks after this interview takes place, a small plane carrying Keanu Reeves and a dozen other passengers from San Francisco to Burbank makes an emergency landing in Bakersfield, and Reeves delights the entire internet again by joining his inconvenienced fellow travelers on a bus (and on their Instagram feeds).