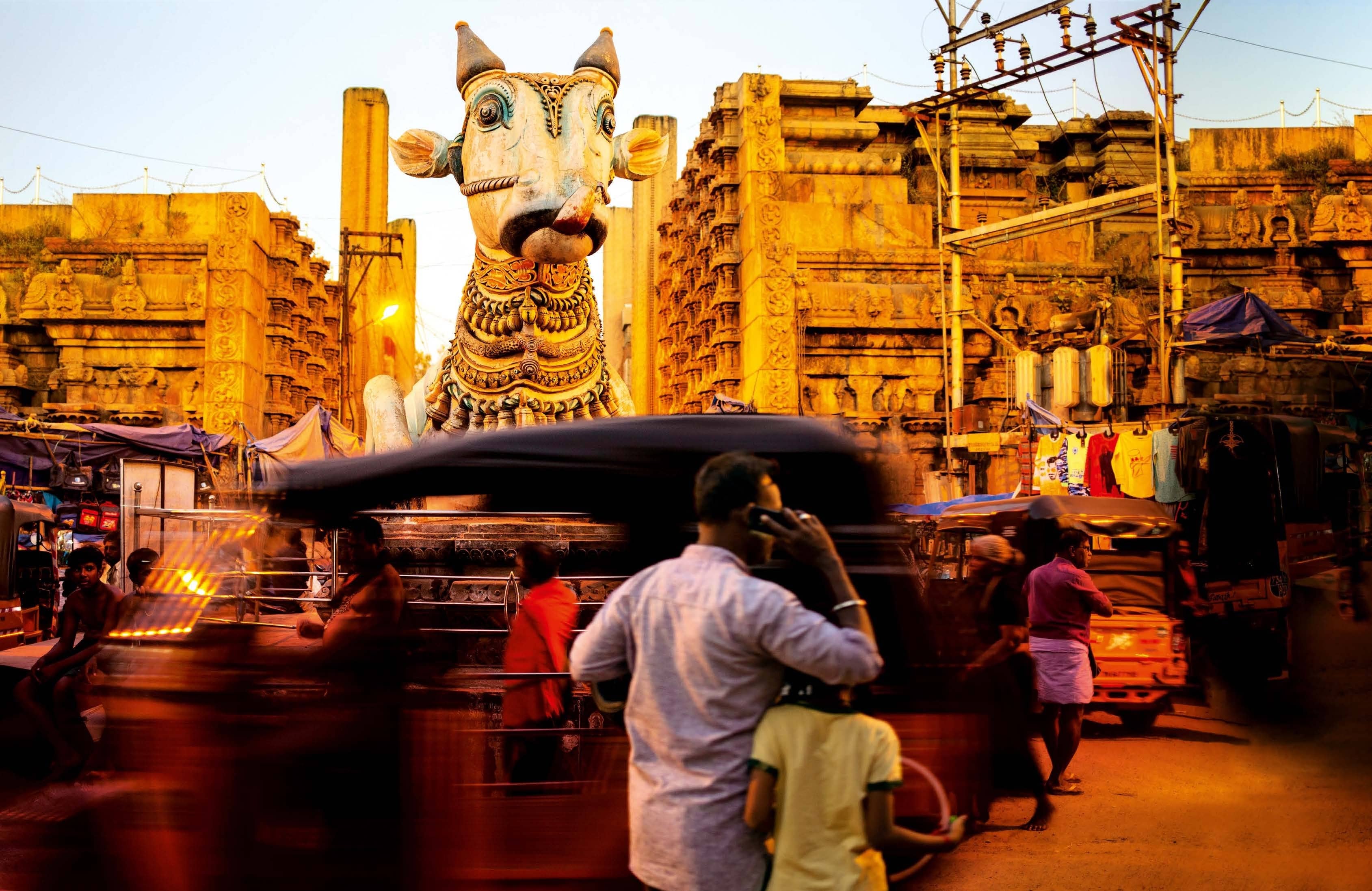 Samar Halarnkar digs into the culinary delights of an ancient town

It is 9am on a balmy Sunday morning, and the worn, marble counter-tops of two gloomy dining rooms in Amsavalli Bhavan are beginning to fill up again. The 7am sitting for breakfast is over, and the cooks are preparing for the second. John Brito, a mathematics teacher, waits patiently – as he does every Sunday – for uthappam and aatu (goat) kidney curry.

“It’s very medicinal, very good for health,” says Brito, a genial man in a plain bush shirt and neat moustache. “And it’s very tasty.” In time, as the kidney and uthappam start to make their appearance, the restaurant starts to fill with women in silk sarees and men in lungis, their foreheads adorned with tripundra, three lines of holy ash. There is little conversation, as the faithful tear off large chunks of uthappam and soak it in a dark, thick curry made from coriander, cumin and hand-ground masalas.

Outside, on the dusty streets of Madurai – made dustier by chaotic excavation work for “smart city” projects – people wait in queues at the doors of what appear like ration shops for subsidised grain. I soon realise these are mutton shops, where every part of the goat is on sale, including the kidneys, liver, blood, spleen, brain, small intestines, testicles and penis.

These traditions are not unfamiliar to me, brought up as I was in a family that is willing to eat any of god’s creatures. Trotter soup, leftover keema, fish or mutton curry with dosa or bread were staple breakfasts for years. But I could not recall kidney curry for breakfast, brain and meat balls for lunch and intestine for dinner, which is what I had on just my first day in Madurai, not forgetting the side dishes of mutton biryani, quail and some chicken.

At Amsavalli Bhavan, the wait for kidneys can be long, and the servings are limited because, well, a goat has only two. Regulars book kidneys in advance. When kidneys run out, and the second sitting ends, Amsavalli gears for its next offering, kozhi chillarai kozhambu, a soup made from the chicken’s “inferior parts”, such as the feet, neck and wings. “If I get a cold, I don’t take medicine,” says Shrikumar Arjunan, a local writer who loves his town and takes a morning off to guide me. “I come here and have the soup.”

By 10am, the load men come in, those who heft sacks in the nearby onion market. The protein-rich soup, at `100 a pop, gives them energy for the day ahead. By lunch time, tourists flock to Amsavalli for its most famous offering – a fragrant mutton biryani.

So it is all over Madurai, where myriad kinds of people pack the messes, bhavans and restaurants to eat more than I have seen other Indians eat. An entire economy has developed around food: a sprawling spice market, the largest meat market in the southern districts and employment for thousands as waiters, cooks, butchers, traders and farmers. Men dominate these jobs, but in most eateries, the women in the family supervise the roasting, mixing and grinding of spices, or make the basic curries.

The city has a tradition of eating that goes back, locals say, more than 2,000 years, steeped in culture, tradition and the pure joy of eating heartily. People eat all the time, even at 2am, when you might find them enjoying their blood roast – a bit like dark, scrambled eggs. This, after all, is thoonganagaram, the city that never sleeps. The meat-eating tradition even spills over into Diwali – indeed, it peaks, with markets open all night.

“Diwali morning breakfast is to die for,” says Praveena Mukunthan, who, along with her husband S Mukunthan, their friend Athideerapandian P and others, runs Foodies Day Out, which customises food tours in Madurai. All three are engineers, founts of knowledge and enthusiastic proponents of their native food. Keema, liver fry and mutton chukka (sukka) with idlis and dosas are Diwali specialities, and no Diwali is complete without idli and mutton curry.

Religion plays a strong part in the endurance of Madurai’s meat-eating tradition. Animal sacrifice is common, especially at the temples of Aiyanar, a guardian deity who guards the outskirts of villages. At one such temple, a priest shows me the blood-flecked stone where goat and chicken are sacrificed. White rice and kari kozhambu, or mutton gravy, is famous at the temple, Madurai Pandi Muneeswaran Kovil.

One of the biggest local festivals is the Meenakshi Thirukalyanam, a 10-day celebration of the celestial wedding ceremony of the city’s patron goddess Meenakshi (a form of Parvati) and Sundareswarar or Sundaresan (Shiva). Lakhs pour into Madurai, manyof them meat-eating pilgrims, appropriate for a meateating goddess.